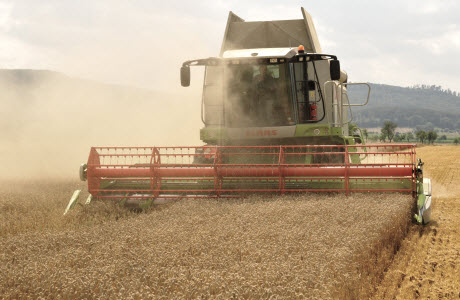 Photo credit: Michael Gäbler, Wikimedia CommonsNew University of Adelaide research has revealed for the first time exactly how plants protect themselves from elements such as boric acid, which in soils at high concentration becomes toxic to plants.

Published in the prestigious journal The Plant Cell, Professor Maria Hrmova, a structural biology researcher from the University of Adelaide, led a team of scientists from Australia, Germany, and USA.

According to Professor Hrmova, this research is fundamental to the agricultural industry, as boric acid toxicity affects crop yields in Australia and around the world, and results in significant revenue losses. The research has led to a better understanding of how to protect vulnerable vegetation to secure higher yields of edible crops and improve their nutritional properties.

“The transport of nutrients and toxins in plants is critical for their survival. It is regulated by transporter proteins that are responsible for directing water and nutrients into plants, and removing toxins, but until now only a handful of these proteins had been characterized and we don’t know how the majority of proteins function,” says Professor Hrmova, from the University’s School of Agriculture, Food and Wine and the Australian Centre for Plant Functional Genomics.

“Manipulating the function of transporters for the benefit of edible plants is no mean feat, since transporters are embedded in plasma membranes (outer cell layers), which makes them very difficult to handle.

“To understand how these transporters work, we have designed an integrated platform encompassing computational, biophysical, and biochemical tools. We then used molecular biology, electrophysiology, and bioinformatics, to describe the function of the transporter underlying boric acid toxicity tolerance.

“This creates an energy barrier that permits an efficient exclusion of borate from plant cells back to soil, possibly through a quantum tunnelling process,” she says.

According to Professor Hrmova, developing this understanding at a molecular level will aid significant advances in agriculture.

“The transport protein that we studied plays a key role in how tolerant a crop, like barley, is to high levels of boric acid in soils. These findings can be used to develop more resilient crops,” says Professor Hrmova.

“This study also presents a platform for deciphering the molecular function of other transporters in plants, like water permeating aquaporins (for the transport of water), and nitrogen, phosphorus, and sugar transporters,” she says. “And now that we know how to influence the transport of boric acid in plants, we can commence developing crops that have improved nutritional properties and higher yields in a variety of sub-optimal soil conditions.”