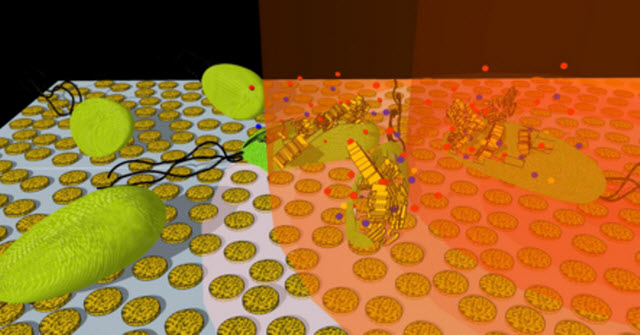 This is an artist's interpretation of how bacteria cells on a nanoporous gold disk array are killed after exposure to near-infrared light.Image Courtesy of: Greggy M. Santos and Wei-Chuan Shih

WASHINGTON—Researchers have developed a new technique for killing bacteria in seconds using highly porous gold nanodisks and light, according to a study published today in Optical Materials Express, a journal published by The Optical Society. The method could one day help hospitals treat some common infections without using antibiotics, which could help reduce the risk of spreading antibiotics resistance.

"We showed that all of the bacteria were killed pretty quickly . . . within 5 to 25 seconds. That's a very fast process," said corresponding author Wei-Chuan Shih, a professor in the Electrical and Computer Engineering Department, University of Houston, Texas.

Scientists create gold nanoparticles in the lab by dissolving gold, reducing the metal into smaller and smaller disconnected pieces until the size must be measured in nanometers. One nanometer equals a billionth of a meter. A human hair is between 50,000 to 100,000 nanometers in diameter. Once miniaturized, the particles can be crafted into various shapes including rods, triangles or disks. 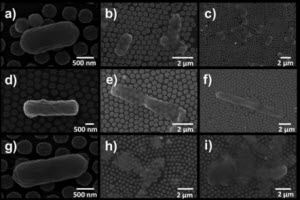 These are SEM images of (a, b and c), B. subtilis (d, e and f) and Exiguobacterium sp. AT1b (g, h and I) cells deposited on nanoporous gold disk arrays. Bacteria cells in images A, D and G were not exposed to near-infrared light. All other cells were exposed for 25 seconds.Image Courtesy of: Greggy M. Santos and Wei-Chuan ShihPrevious research shows that gold nanoparticles absorb light strongly, converting the photons quickly into heat and reaching temperatures hot enough to destroy various types of nearby cells—including cancer and bacterial cells.

In 2013, Shih and his colleagues from the University of Houston created a new type of gold disk-like nanoparticle that measures to a few hundred nanometers in diameter. The disks are riddled with pores, lending the particles a sponge-like look that helps increase their heating efficiency while maintaining their stability, said Shih.

In the new work, the researchers set out to test the antimicrobial properties of their new nanoparticles when activated by light. They grew bacteria in the lab including E. coli and two types of heat-resistant bacteria that thrive in even the most scorching environments such as the hot springs of Yellowstone National Park.

Then, they placed the bacteria cells on surface of a single-layer coating of the tiny disks and shone near infrared light from a laser on them. Afterward, they used cell viability tests and SEM imaging to see what percentage of cells survived the procedure.

Using a thermal imaging camera, the research team showed that the surface temperature of the particles reached temperatures up to 180 degrees Celsius nearly instantaneously, "delivering thermal shocks" into the surrounding array. As a result, all of the bacterial cells were killed within 25 seconds, the researchers report.

E. coli proved most vulnerable to the treatment; all of its cells were dead after only five seconds of laser exposure. The other two types of bacteria required the full 25 seconds, but that's still much quicker than traditional sterilization methods such as boiling water or using dry-heat ovens, which can take minutes to an hour to work, said Shih. And it's "considerably shorter" than what other nanoparticle arrays have demonstrated in recent studies, the researchers write. The time needed to achieve similar levels of cell death in those studies ranges from 1 to 20 minutes.

In control trials, the researchers found that neither the gold disks nor light from the laser alone killed nearly as many cells.

The technique has important potential biomedical applications, said Shih. Currently, the researchers are investigating using the particles as a simple coating for catheters to help reduce the number of urinary tract infections in hospitals.

"Any sort of light activated procedure would be much easier to implement at the bedside of a patient," instead of removing and potentially replacing the catheter every time it needs to be cleaned, he said.

Another potential application they're exploring is integrating the nanoparticles with filter membranes in small water filters, he said, to help improve water quality.