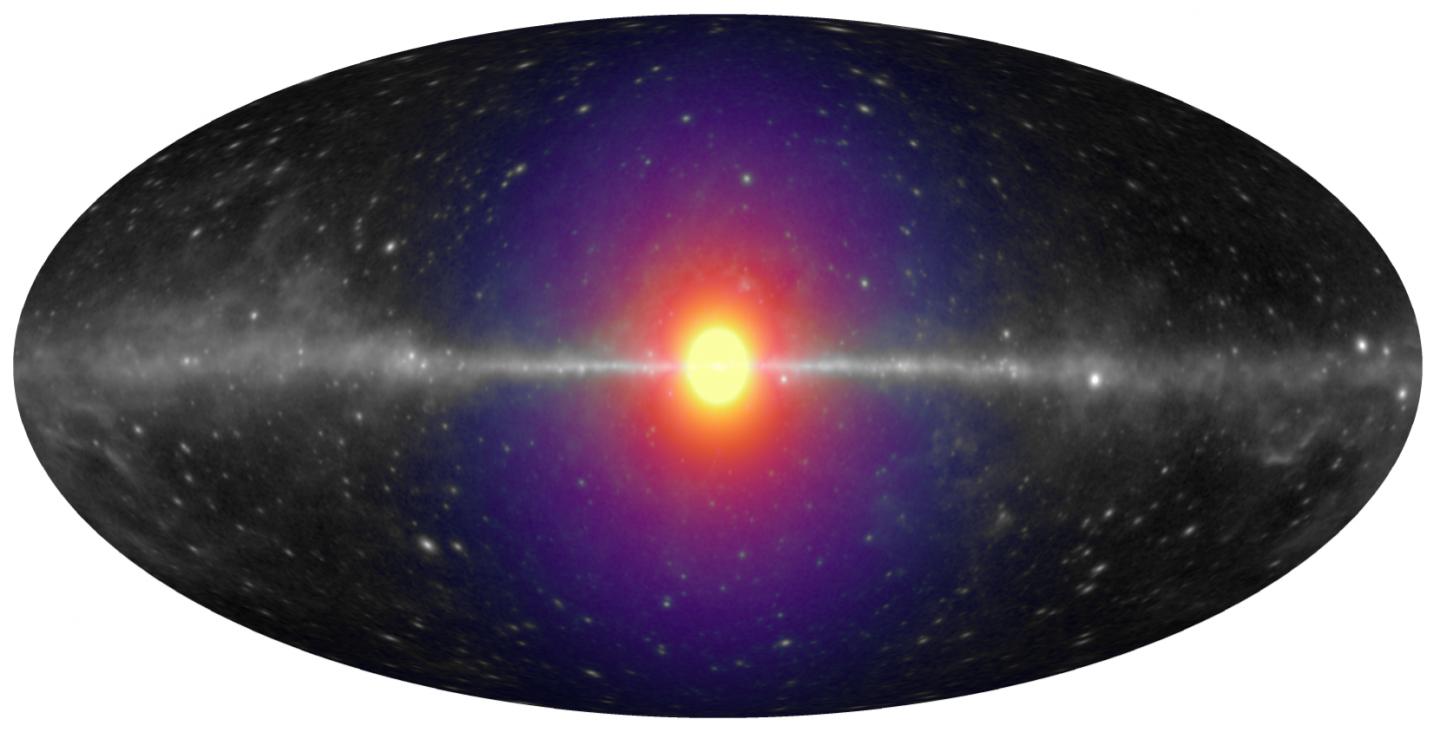 In this composite image, theorized particles of decaying dark matter should produce a spherical halo of X-ray emission—represented here as colorized matter concentrated around the center of the Milky Way (in black and white)—that could be detectable when looking in otherwise blank regions of the galaxy.
Zosia Rostomian and Nicholas Rodd/Berkeley Lab; and Christopher Dessert and Benjamin Safdi/University of Michigan

So far, the only direct evidence we have for the existence of dark matter is through gravity-based effects on the matter we can see. And these gravitational effects are so pronounced that we know it must make up about 85 percent of all matter in the universe.

But we know little else about dark matter, including whether it is made up of as-yet-undiscovered particles.

There are many competing theories for the composition and properties of dark matter, and for whether dark matter has any visible markers to at last unmask it.

Among the theorized dark matter particle candidates are WIMPs (weakly interactive massive particles), axions, and sterile neutrinos—and physicists have searched for each type using a variety of Earth and space-based instruments and methods.

Nearly 20 years ago, physicists suggested that the theorized sterile neutrino form of dark matter could be responsible for emitting light at a specific energy as its particles decay away in space, and in 2014 a study detailed a light signature, called the "3.5 keV line," found in very large galaxy clusters—keV is a measure of energy that represents a thousand electron volts or kilo electron volts.

The study theorized that this line, which had no confirmed source, could be the smoking gun for dark matter decay that scientists had been searching for.

But a new study by scientists at the U.S. Department of Energy's (DOE's) Lawrence Berkeley National Laboratory (Berkeley Lab), UC Berkeley, and the University of Michigan—publishing this week in the journal Science (see an arXiv.org preprint: https://arxiv.org/abs/1812.06976)—concludes that this explanation of sterile neutrino decay is now essentially ruled out as the source of this line.

"Our finding does not mean that the dark matter is not a sterile neutrino, but it means that ... there is no experimental evidence to-date that points towards its existence," said Benjamin Safdi, a study co-author and an assistant professor of physics at the University of Michigan.

The researchers' approach, which analyzed X-ray telescope observations of dark places within our own galaxy where dark matter was expected, did not find evidence of the 3.5 keV line.

"Our limits are so strong that they are likely to cause difficulty for any simple models of dark matter," said Nicholas Rodd, study co-author and a physicist affiliated with the Berkeley Lab theory group and the Berkeley Center for Theoretical Physics, which has faculty members from UC Berkeley and Berkeley Lab. Rodd has been working with Safdi for several years in researching possible visible manifestations of dark matter in space.

The technique the researchers developed, which is detailed in the latest study, also has the potential to analyze, with extreme sensitivity, other possible dark matter signatures in space.

"While this work does, unfortunately, throw cold water on what looked like might have been the first evidence for the microscopic nature of dark matter, it does open up a whole new approach to looking for dark matter which could lead to a discovery in the near future," Safdi said.

Instead of looking at other galaxies and galaxy clusters—places expected to be especially rich in dark matter—for signs of this 3.5 keV line, the researchers analyzed data from more than 20 years' worth of X-ray telescope images of "empty" space within our own Milky Way galaxy where you might expect the presence of dark matter but nothing else.

Based on observed gravitational effects associated with dark matter, galaxies including our own Milky Way galaxy are expected to be surrounded by so-called halos of dark matter. Such halos would explain observations showing that objects nearer to a galaxy's center orbit as the same speed as objects at the outskirts, which defies explanation if you only take into account visible matter.

"Everywhere we look, there should be some flux of dark matter from the Milky Way halo," Rodd said, owing to our solar system's location in the galaxy. "We exploited the fact that we live in a halo of dark matter" in the study.

Christopher Dessert, a study co-author who is a physics researcher and PhD student at the University of Michigan, said galaxy clusters where the 3.5 keV line has been observed also have large background signals, which serve as noise in observations and can make it difficult to pinpoint specific signals that may be associated with dark matter.

"The reason why we're looking through the galactic dark matter halo of our Milky Way galaxy is that the background is much lower," Dessert said.

The researchers used data from the XMM-Newton (X-ray Multi-Mirror) mission, a space-based X-ray telescope launched in 1999 by the European Space Agency. They restricted the data they used to a collection of images from about 800 so-called "blank sky" regions in space that were sampled within five to 45 degrees of the Milky Way's galactic center - areas expected to have higher concentrations of dark matter.

They compared their own analysis to others' analyses that were based on observations of regions in space thought to be rich in dark matter, such as the Perseus Cluster of galaxies and the Andromeda Galaxy.

Rodd said the team's analysis technique could be used to reanalyze data taken from other X-ray telescopes' observations to scan in high detail for other light signals emitted across a far broader range of energies.

"How can we extend this technique to look at more cases?" Rodd said. "There are tons of other datasets out there that we don't say anything about in this study. If you are looking generically for dark-matter decay and you want to have more sensitivity, this is the way. This is a general tool that anyone searching for dark matter can use."