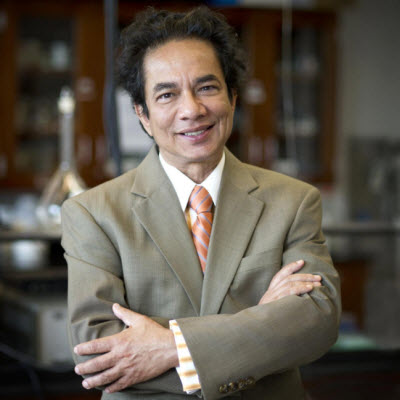 Purnendu Dasgupta, Hamish Small Chair in Ion Analysis and James Garrett Professor in UTA's Department of Chemistry and Biochemistry.Photo Courtesy of: UTAResearchers from The University of Texas at Arlington have demonstrated that electrical conductivity can be an effective means to precisely measure the amount of blood present in dry blood spot analysis, providing a new alternative to the current preferred approach of measuring sodium levels.

Dry blood spots are a pinprick of blood blotted on filter paper and allowed to air dry, which is then sent to a laboratory for analysis. Simple and inexpensive, dry blood spot analysis is routinely used to screen newborns for metabolic disorders and has also proven effective in diagnosing infant HIV infection, especially in developing countries where health budgets are limited.

"Our new method, which involves using an electrode probe to measure electrical conductivity, has proven accurate to within one percent," said Purnendu Dasgupta, Hamish Small Chair in Ion Analysis and James Garrett Professor in UTA's Department of Chemistry and Biochemistry. "It also has the considerable advantage of using up none of the sample where the currently preferred approach uses around half the sample."

Dasgupta and his co-author Jordan Berg, professor of mechanical engineering at Texas Tech University and co-director of the Nano Tech Center, published their findings, "Evaluation of the amount of blood in dry blood spots: ring-disk electrode conductometry," in Analytical Chemistry. Akinde Kadjo, Brian Stamos, Phillip Shelor, all of UTA, and Benjamin Blount of the Center for Disease Control and Prevention's Division of Laboratory Sciences, also participated in the study, with Kadjo doing most of the work.

Dasgupta and his co-researchers used 12 volunteers aged 20 to 66, taking pinpricks of blood and letting the dry blood spot samples dry. They then took a 3 millimeter punch out of each dry blood spot, dissolved the punch in methanol and water mixtures and used a dip-type small diameter ring-disk electrode to measure the conductance of the samples, determining the minimum immersion depth that proved accurate in measuring the amount of blood to within one percent.

"As analytical instrumentation has improved, dry blood spot analysis is becoming increasingly popular for clinical trials to monitor the effects of therapeutic drugs and for large-scale epidemiology and genetic studies, where it is vital to know the exact amount of blood in the sample," Dasgupta said. "Our new dip probe method offers clear advantages, but it does have the same problem as measuring sodium in that it does not function if the subject has abnormal electrolyte levels, which happens in some diseases."

The researchers plan to continue their line of research with new funding provided recently by the Centers for Disease Control and Prevention. The initial research was supported partially by the National Science Foundation, ThermoFisher/Dionex, the CDC Foundation and the Hamish Small Chair endowment at UTA.

Frederick MacDonnell, chair of UTA's Department of Chemistry and Biochemistry, said, "In line with UTA's focus on health and the human condition within the Strategic Plan 2020: Bold Solutions | Global Impact, Dr. Dasgupta and his colleagues have made an important contribution around the increasingly popular blood testing method of dry blood spot analysis.

"While more research needs to be done, they have demonstrated that measuring conductivity is a viable alternative to measuring sodium and has some specific advantages over the current approach."

Dasgupta has won numerous awards in his field, including the American Chemical Society National Award in Chromatography in 2011 and the Stephen Dal Nogare Award in Chromatography in 2012. In February 2015, he was honored with the American Chemical Society Division of Analytical Chemistry J. Calvin Giddings Award for Excellence in Education. He is slated to receive the prestigious Eastern Analytical Symposium "Fields" Award, which honors scientists who have not focused on just one but contributed to the many sub-disciplines within analytical chemistry.

Dasgupta's active research areas include methods for environmentally-friendly analysis of arsenic in drinking water; rapid analysis of trace heavy metals in the atmosphere; iodine nutrition in women and infants and the role of the chemical perchlorate; and the development of a NASA-funded ion chromatograph for testing extraterrestrial soil, such as that found on Mars. In 2015, he was ranked among the Top 100 most influential people in the world of analytical science by the monthly journal The Analytical Scientist.

About The University of Texas at Arlington

The University of Texas at Arlington is a Carnegie Research-1 "highest research activity" institution of about 55,000 students in campus-based and online degree programs and is the second-largest institution in The University of Texas System. U.S. News & World Report ranks UTA fifth in the nation for undergraduate diversity. The University is a Hispanic-Serving Institution and is ranked as the top four-year college in Texas for veterans on Military Times' 2016 Best for Vets list. Visit http://www.uta.edu to learn more, and find UTA rankings and recognition at http://www.uta.edu/uta/about/rankings.php.