May 21, 2017University of Nebraska Medical Center 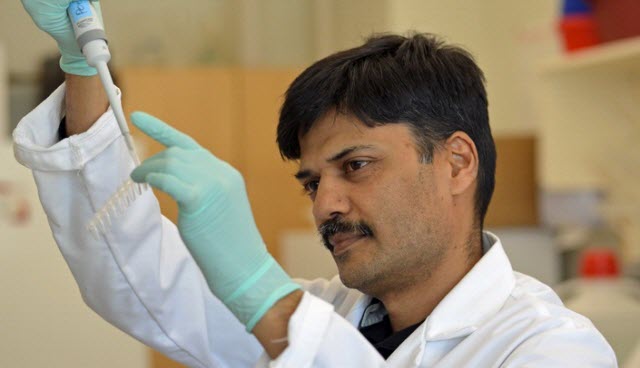 "With Easi-CRISPR, creating knock-in mice is as simple as using ‘Find’ and ‘Edit’ in Microsoft Word," said Paula Turpen, PhD, director for research resources at the University of Nebraska Medical Center. Dr. Turpen likened previous genetic-engineering methods to reading through a manuscript and making changes with a manual typewriter and a bottle of liquid "Wite-Out."

Building off the CRISPR-Cas genome editing methods, Easi (efficient additions with ssDNA inserts)-CRISPR is the crucial next step in genome engineering to create designer animal models.

These models help scientists study the role of genes and mutations in human diseases, and explore the use of gene therapy and other potential treatments.

CRISPR was a groundbreaking advance, allowing scientists to "cut" individual genes from a genome as a replacement for creating "knockout" models. But "knocking in" a new DNA cassette, or generating more complicated conditional knockouts—which comprise over 90 percent of animal models needed by scientists—still proved inefficient, challenging, and expensive.

A recent Science Magazine news article captured the frustration of the research community about the limitations of the available CRISPR methods.

Easi-CRISPR, by contrast, enables the insertion of long DNA sequences into CRISPR-cut genomes at efficiencies of up to 100 percent.

Dr. Gurumurthy said increased efficiencies are the result of inserting long single-stranded DNA, rather than double-stranded DNA. The idea came to his long-term collaborator, Masato Ohtsuka, PhD, of Japan’s Tokai University, while the two scientists were literally scribbling on a napkin at a conference in 2014.

Dr. Gurumurthy said several independent labs have already been able to reproduce the Easi-CRISPR study’s results, thanks to its early online posting on the preprint server BioRxiv.

Easi-CRISPR is the result of an international collaboration between seven institutions, headed by Drs. Gurumurthy and Ohtsuka, with Dr. Suzanne Mansour of the University of Utah as a major collaborator. The collaboration includes Integrated DNA Technologies (IDT), a global leader in custom nucleic acid synthesis and genome editing products, based in Coralville, Iowa.

"The present study demonstrates how efficiently DNA sequences can be introduced into a genome using long single-stranded DNA combined with Cas9 protein," Mark Behlke, MD, PhD, IDT’s chief scientific officer, said. "We are excited to help advance this field with our products. The work presented here should be of high interest to everyone generating animal models using CRISPR technology."