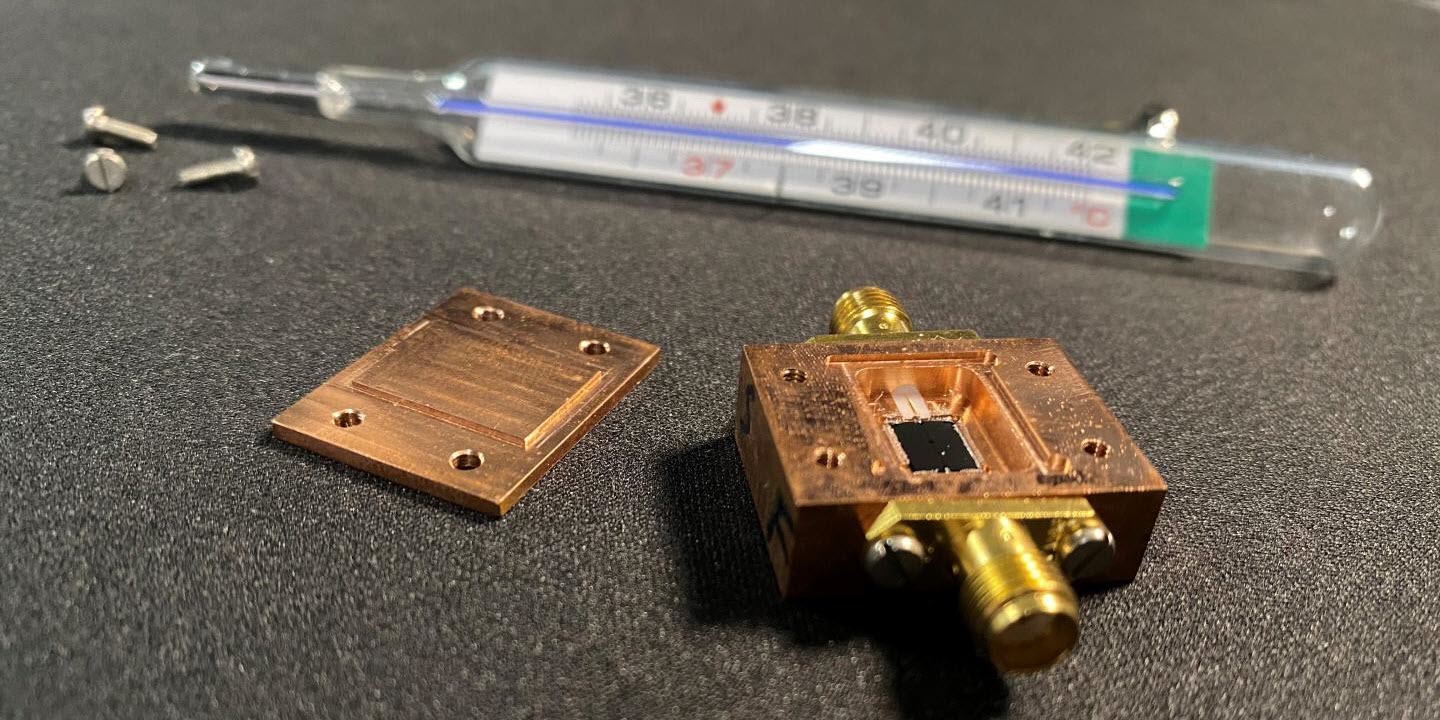 The new quantum thermometer on a chip, in the foreground. It is probably the world's fastest and most sensitive thermometer for measuring temperature at the cold end of a waveguide at the millikelvin scale, according to the Chalmers researchers.
Claudia Castillo Moreno/Chalmers University of Technology

Researchers at Chalmers University of Technology, Gothenburg, Sweden, have developed a novel type of thermometer that can simply and quickly measure temperatures during quantum calculations with extremely high accuracy. The breakthrough provides a benchmarking tool for quantum computing of great value—and opens up for experiments in the exciting field of quantum thermodynamics.

A key component in quantum computers are coaxial cables and waveguides—structures which guide waveforms, and act as the vital connection between the quantum processor, and the classical electronics which control it. Microwave pulses travel along the waveguides to the quantum processor, and are cooled down to extremely low temperatures along the way. The waveguide also attenuates and filters the pulses, enabling the extremely sensitive quantum computer to work with stable quantum states.

In order to have maximum control over this mechanism, the researchers need to be sure that these waveguides are not carrying noise due to thermal motion of electrons on top of the pulses that they send. In other words, they have to measure the temperature of the electromagnetic fields at the cold end of the microwave waveguides, the point where the controlling pulses are delivered to the computer's qubits. Working at the lowest possible temperature minimizes the risk of introducing errors in the qubits.

Until now, researchers have only been able to measure this temperature indirectly, with relatively large delay. Now, with the Chalmers researchers' novel thermometer, very low temperatures can be measured directly at the receiving end of the waveguide—very accurately and with extremely high time resolution.

"Our thermometer is a superconducting circuit, directly connected to the end of the waveguide being measured. It is relatively simple—and probably the world's fastest and most sensitive thermometer for this particular purpose at the millikelvin scale," says Simone Gasparinetti, assistant professor at the Quantum Technology Laboratory, Chalmers University of Technology.

The researchers at the Wallenberg Centre for Quantum Technology, WACQT, have the goal to build a quantum computer—based on superconducting circuits—with at least 100 well-functioning qubits, performing correct calculations by 2030. It requires a processor working temperature close to absolute zero, ideally down to 10 millikelvin. The new thermometer gives the researchers an important tool for measuring how good their systems are and what shortcomings exist—a necessary step to be able to refine the technology and achieve their goal.

"A certain temperature corresponds to a given number of thermal photons, and that number decreases exponentially with temperature. If we succeed in lowering the temperature at the end where the waveguide meets the qubit to 10 millikelvin, the risk of errors in our qubits is reduced drastically", says Per Delsing, professor in the Department of Microtechnology and Nanoscience, Chalmers University of Technology, and leader of WACQT.

Accurate temperature measurement is also necessary for suppliers who need to be able to guarantee the quality of their components, for example cables that are used to handle signals down to quantum states.

New opportunities in the field of quantum thermodynamics 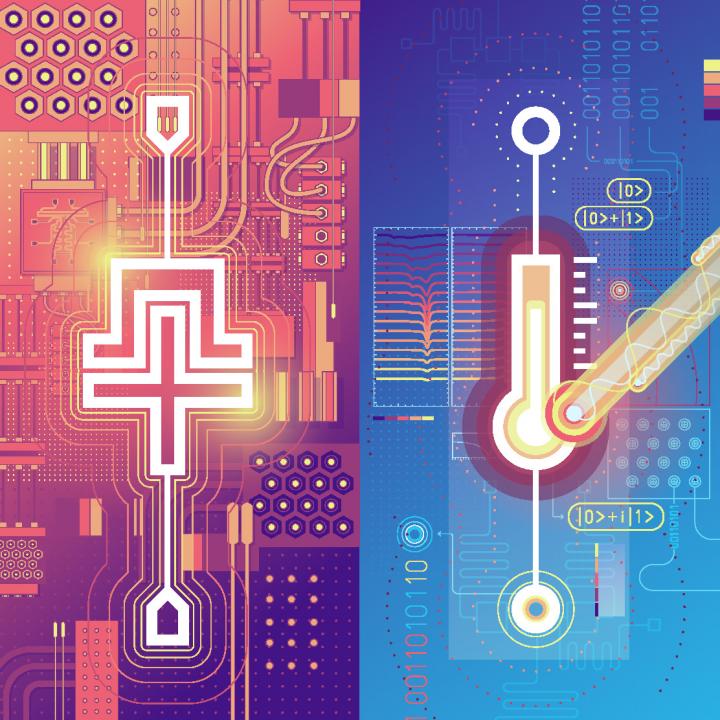 An artistic impression of the superconducting circuit used in the experiment by Scigliuzzo et al. (left), and of its capability of measuring thermal microwaves at the level of a single excitation quantum (right).
Illustrations: neuroncollective.com / Chalmers University of Technology

Quantum mechanical phenomena such as superposition, entanglement, and decoherence mean a revolution not only for future computing but potentially also in thermodynamics. It may well be that the thermodynamic laws somehow change when working down at the nanoscale, in a way that could one day be exploited to produce more powerful engines, faster-charging batteries, and more.

"For 15-20 years, people have studied how the laws of thermodynamics might be modified by quantum phenomena, but the search for a genuine quantum advantage in thermodynamics is still open", says Gasparinetti, who recently started his own research group and plans to contribute to this search with a novel range of experiments.

The new thermometer can, for example, measure the scattering of thermal microwaves from a circuit acting as a quantum heat engine or refrigerator.

- This press release was originally published on the Chalmers University of Technology website. It has been edited for style