Wolbachia is the most successful parasite the world has ever known. You’ve never heard of it because it only infects bugs: millions upon millions of species of insects, spiders, centipedes, and other arthropods all around the globe.

The secret to the over-achieving bacterium’s success is its ability to hijack its hosts’ reproduction. Biologists have known that Wolbachia have had this power for more than 40 years but only now have teams of biologists from Vanderbilt and Yale Universities identified the specific genes that confer this remarkable capability.

The two universities have applied for a patent on the potential use of these genes to genetically engineer either the bacterial parasite or the insects themselves to produce more effective methods for controlling the spread of insect-borne diseases like dengue and Zika and for reducing the ravages of agricultural pests.

This achievement is described in the journal Nature in a paper titled “Prophage WO Genes Recapitulate and Enhance Wolbachia-induced Cytoplasmic Incompatibility” and in a companion article titled “A Wolbachia deubiquitylating enzyme induces cytoplasmic incompatibility” in Nature Microbiology published online on Feb. 27.

“We’ve known for decades that one of the secrets to Wolbachia’s success is that it interferes with host reproduction in order to spread itself through females. But how the bacterium did it was a major mystery for the field,” said associate professor of biological sciences Seth Bordenstein, who headed the Vanderbilt contingent. “Now we know the genes that give it this capability.”

Wolbachia commonly manipulates its hosts’ reproduction by a process called “cytoplasmic incompatibility” or CI. This makes the sperm of infected males lethal to the eggs of uninfected females. The researchers have identified a single pair of Wolbachia genes that produce this effect only when working together. 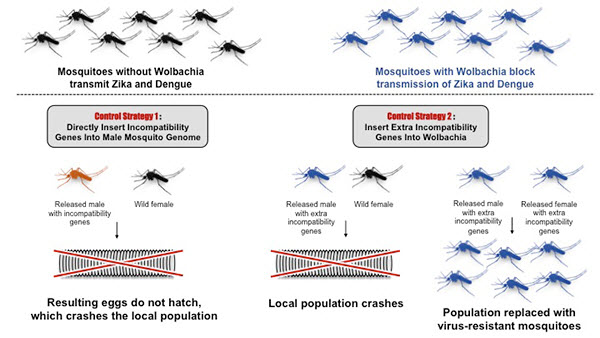 There are two basic strategies for using Wolbachia’s incompatibility genes for combatting mosquito-borne diseases: (left) Use genetic engineering to insert the genes directly into the mosquito genome; (right) increase the number of incompatibility genes in parasite which allows it to spread more rapidly through local mosquito population, replacing the mosquitoes spreading human viral diseases like dengue and Zika with infected mosquitoes that do not transmit these diseases.Photo credit: Bordenstein Lab / Vanderbilt

“This is an extremely effective strategy. Under ideal conditions it allows Wolbachia to infect an entire host population within a few generations or years,” said Bordenstein.

For a number of years, scientists have been looking for ways to use this natural bacterium to control mosquitoes that spread human diseases, and they have recently had some notable, early successes.

Wolbachia is not normally found in Aedes aegypti, the mosquito that spreads dengue, Zika, and chikungunya viruses. Ten years ago, however, a team of Australian scientists discovered that when Wolbachia is introduced into Aedes, it prevents these disease viruses from growing. That led to the creation of an international, non-profit collaboration called “Eliminate Dengue.”

The results have been extremely promising, so the groups are conducting field studies around the world to determine the most effective way to use Wolbachia to control Zika and dengue, which is considered the most important and most rapidly spreading mosquito-borne viral disease in the world. 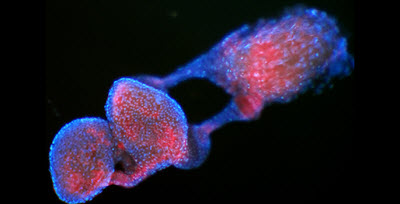 Wolbachia (stained in red) infected the testes of a host insect (stained in blue) magnified by 100 times.Image credit: Bordenstein Lab / VanderbiltOther initiatives such as “MosquitoMate” in Kentucky are also using this approach to suppress the size of mosquito populations by releasing infected male mosquitoes which sterilize the uninfected females in the wild though CI.

“There are two basic approaches for using Wolbachia to eliminate or curb the spread of a viruses like dengue and Zika,” said Bordenstein.

The stable approach, called population replacement, is to introduce both males and females infected with Wolbachia so they spread the bacteria on their own until they eventually replace the resident population. As they spread, the risk of dengue and Zika transmission drops because Wolbachia prevents these disease viruses from replicating.

The second approach, called population suppression, is to introduce copious numbers of infected males. Because the uninfected females that mate with infected males fail to reproduce, this reduces the size of the target population of either disease-carrying insects or agricultural pests.

The first approach is slow but steady and should eventually lead to the reduction or virtual elimination of disease transmission. The second approach is faster but the insect population can rebound so it must be administered repeatedly.

The Vanderbilt researchers found that using genetic engineering to insert the Wolbachia CI genes into infected insects can strengthen the incompatibility effect and so significantly decrease the hatch rate of uninfected females who mate with infected males. As a result, it may increase the rate at which the bacterium spreads.

This result raises two possibilities, which are the subject of the patent application: One is to directly transform strains of Wolbachia by inserting more copies of the CI genes. When used for population replacement, insects infected with this “super-Wolbachia” should spread more rapidly and could be more effective when used for population replacement or suppression. The other is to insert the CI genes into the insect’s genome so they can cause CI directly. This would make it possible to use this technique to suppress insect species that are resistant to Wolbachia infection. 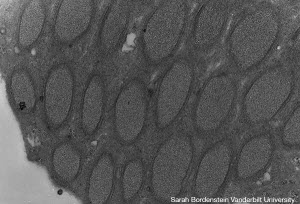 An electron micrograph—magnified by 15,000 times—clearly shows individual Wolbachia cells embedded in insect tissue.Image credit: Sarah Bordenstein / VanderbiltBordenstein and his colleagues have been hunting for the CI genes for nearly two decades and tracked them down by sequencing and comparing Wolbachia genomes from strains that cause and do not cause CI. They then used the process of elimination to track down the responsible genes. They discovered two genes that appeared promising. However, when the researchers inserted each of these genes into the genome of fruit flies, it was a complete bust. Neither of them affected the flies’ reproduction: Their eggs hatched normally.

“When we tried them together, however, it blew the roof off,” said Bordenstein. “We were able to genetically reproduce and enhance the CI effect in Drosophila.”

According to the biologists, the origin of the CI genes remains a complete mystery. They are located in a portion of the Wolbachia genome called the eukaryotic association module, which contains genes that the bacterium appears to use to interact with its host. Other than that, the researchers have no idea where they come from.

The researchers’ next step is to search for the genes in infected females that counteract CI, which rescue their eggs and allow them to hatch normally.