Most people have never heard of mastocytosis. It’s a rare, sometimes deadly, immune disorder. Now new research may help those with advanced mastocytosis and possibly many more people, too. “This is the first drug that’s shown to be effective in this very rare disease,” says Tracy George, MD, at the University of New Mexico Comprehensive Cancer Center. George was part of the international team that recently published the results of its study on mastocytosis in the New England Journal of Medicine. 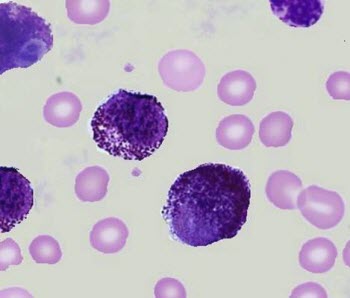 Blood smear with mast cell leukemia.Image credit: Ayman Qasrawi, Wikimedia Commons“Mast cells are normal cells in the body that mediate the body’s allergic and inflammatory responses,” says George. “But people with mast cell disease have too many mast cells and they’re abnormal.” Too many abnormal mast cells can cause allergic reactions and inflammation. Different subtypes of the disease differ in the how serious these responses are.

People with indolent mastocytosis may have mild symptoms and lead normal lives. Others with indolent mastocytosis may have flushing and diarrhea and other symptoms severely enough that they can’t hold a job or do things that most people can do. People with other subtypes of the disease can have life-threatening reactions, such as anaphylactic shock and organ damage. And people with advanced mastocytosis—the most deadly subtype is called mast cell leukemia—live less than six months after their diagnosis.

The Food and Drug Administration has approved only one drug, called imatinib, to treat advanced mastocytosis. Imatinib blocks the action of a cellular protein called a tyrosine kinase receptor. But people with a mutation in a gene called D816V KIT do not respond to imatinib. The D816V KIT gene codes for a tyrosine kinase receptor, says George. And, she says, most people with advanced mastocytosis have the D816V KIT mutation.

Related Article: Stem Cells May Speed Up Screening of Drugs for Rare Cancers

Research on the new treatment began at Stanford University, where George worked with a colleague, Jason Gotlib, MD, whose patient had mast cell leukemia. They gave that woman a drug called midostaurin under the FDA’s compassionate use policy. “Midostaurin is a multi-kinase inhibitor,” says George. “Midostaurin was being evaluated in a clinical trial for a different disease, acute myeloid leukemia. And this lady with mast cell leukemia remarkably improved within weeks, within days.”

The clinical trial included treatment for three subtypes of advanced mastocytosis. Still, it took years to enroll enough people because the disease is so rare. Mastocytosis affects only about one person in 10,000. In comparison, breast cancer affects more than 12 times as many people and prostate cancer affects more than 13 times as many, according to the American Cancer Society. But even though the clinical trial was small, the results were astounding.

People with advanced mastocytosis on the clinical trial lived an average of 28 months longer. This average includes the 40 percent of people who did not respond to midostaurin. The 60 percent who did respond, though, responded within two or three months of starting treatment. Responders had mild side effects like diarrhea, vomiting, and nausea, if they had any at all.

Sixteen people in the clinical trial had mast cell leukemia. “For those patients who did respond,” says George, “their median survival has not been reached. So that means [some are] still living, which is unbelievable.”

The clinical trial has spurred more research. Scientists around the world are now studying how midostaurin affects mast cells and how to combine it with other drugs to create an even more potent treatment. Novartis, the maker of midostaurin, and other drug companies are investing in research on multi-kinase inhibitors. Clinical trials to test midostaurin for controlling symptoms in people with indolent mastocytosis have opened. And more research into using midostaurin to treat asthma, skin diseases, and allergies is in the planning stages.