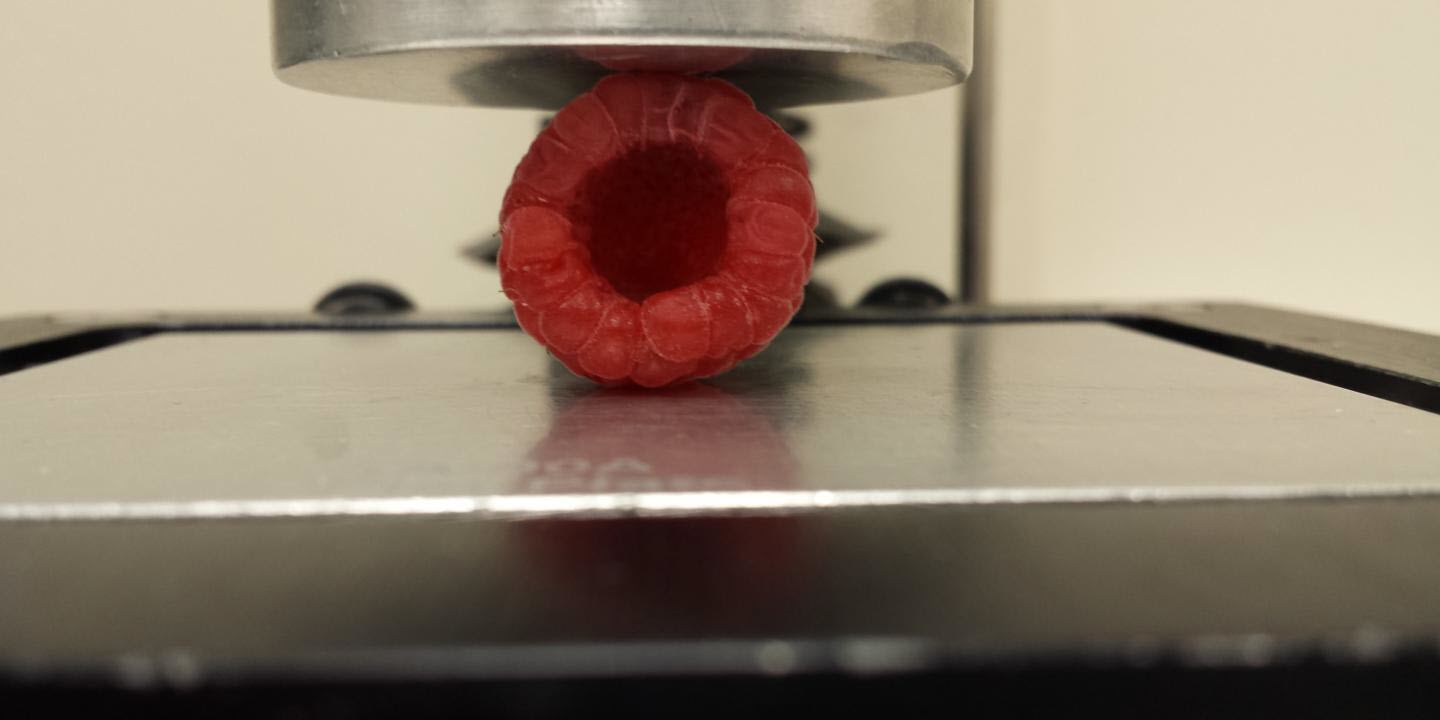 A treated raspberry is tested for how well it maintains its structure under light pressure.
WSU

Raspberry muffins are in our future.

Washington State University scientists have figured out a way to treat raspberries before they're frozen so that they maintain their structure when thawed.

The tart little berries are very delicate and freezing damages their cells. They turn to mush when baked and leak juice into the surrounding baked product, making them unattractive and diluted in flavor. As a result, frozen raspberries are rarely used in baking, whether at home or in commercial bakeries. But that's about to change.

In a recent article published in Food and Bioprocess Technology, Shyam Sablani and his team describe their method of reducing syneresis, or the leaking out of liquid.

Washington State is responsible for approximately 95 percent of processed (frozen) red raspberry production in the nation.

"We wanted to help the Washington raspberry industry," said Sablani, a professor in WSU's Department of Biological Systems Engineering. "Frozen raspberries are good in smoothies and things like that, but not in baking. We wanted to find a way to keep them intact through the baking process."

Doing that requires three separate steps, all of them long-proven as safe for people to eat. First, they infuse each berry with pectin, which is often used as a thickener in cooking and baking, and calcium, which plays an important role in maintaining the cell-wall structure by forming a firm gel-like structure. Second, the raspberries are partially dried, reducing the damage from ice crystals in the thawed fruit.

"You can't dry them completely, you don't want them to look like raisins," Sablani said. "But removing part of the water still allows the raspberries to maintain their color and shape."

The third step is to cover the berries with a food grade edible coating that's often used in coating pre-baked frozen pies and pizzas.

"That way, when the raspberry is being frozen, it won't leak any juice and the coating will protect the moisture that's left," Sablani said.

He and his team ran hundreds of tests to get the best results for each step, then did their own hands-on testing.

"My PhD student, Armando Quintanilla, made raspberry muffins and cakes many times," he said. "They were really tasty, and the raspberries held their shape and juices well."

After their own testing, Sablani and his team partnered with a commercial baker in Western Washington who made two batches of raspberry muffins. One had frozen berries bought from a store, the other berries frozen using Sablani's new method. The baker did not know which frozen berries were which. 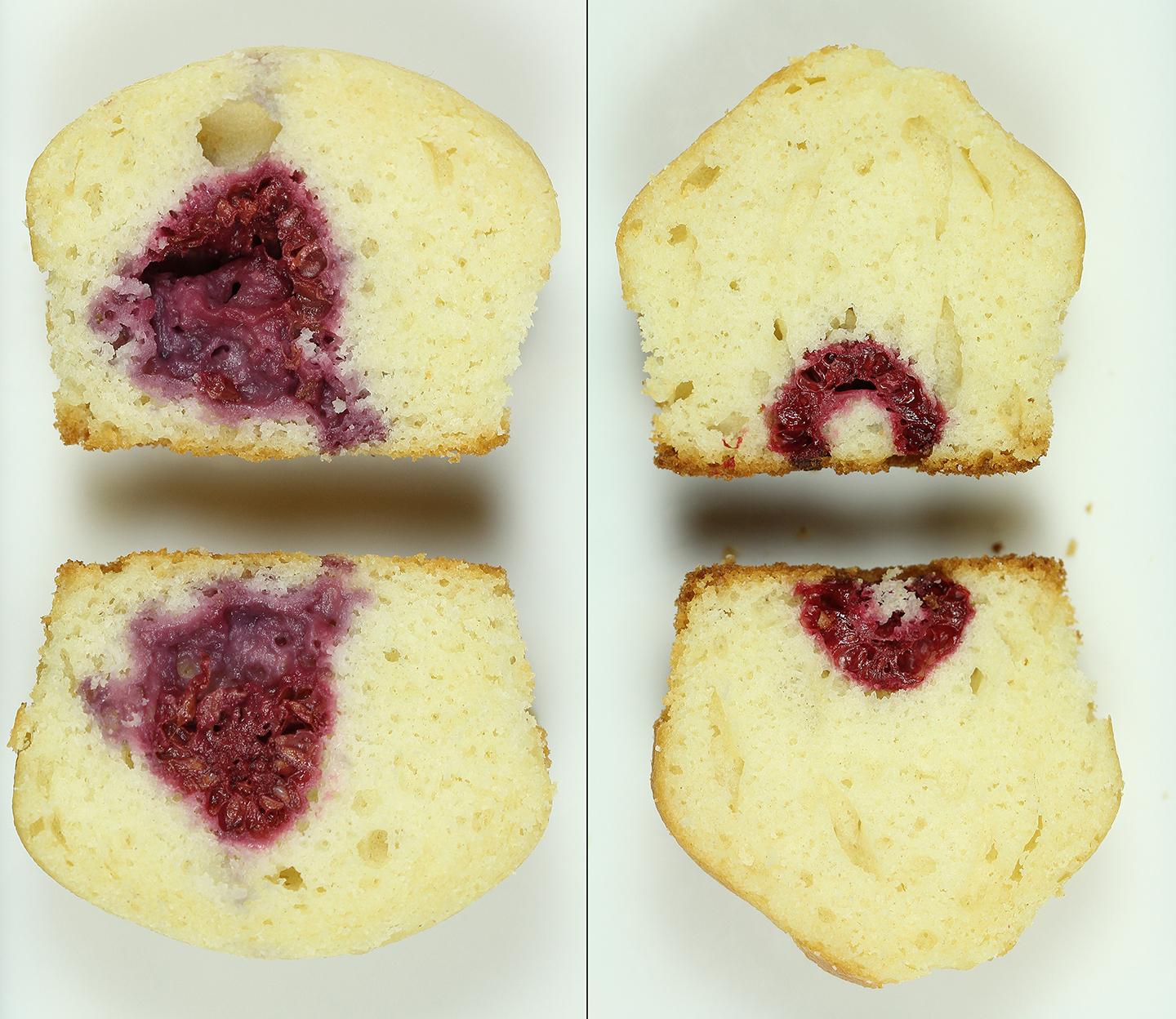 Then both muffins were served in a blind taste-test to members of the Washington raspberry council during their annual meeting (pre-COVID 19 pandemic).

"They could tell a difference right away," Sablani said. "The store-bought raspberries bled juice all over with no big chunks of fruit. Ours kept their shape with very little bleeding."

After impressing industry representatives, the next step is to start work on increasing the process to commercial scale. That means working with raspberry processors who would need to add the new capabilities at their facilities.

It also requires food makers to include more baked raspberry items in their product lines. That means doing consumer testing to gauge the potential market, so it may be a while before this breakthrough leads to raspberry muffins or bagels becoming a grocery store staple.

"We're early on in this work," Sablani said. "But we're excited and think there will be a market. People love raspberries; they've got lots of flavor."

The work for this project was funded by a Washington State Department of Agriculture Specialty Crop Block Grant.

Sablani plans to apply for a larger grant later this year to further develop the process on a commercial scale and include market testing.

- This press release was originally published on WSU Insider. It has been edited for style