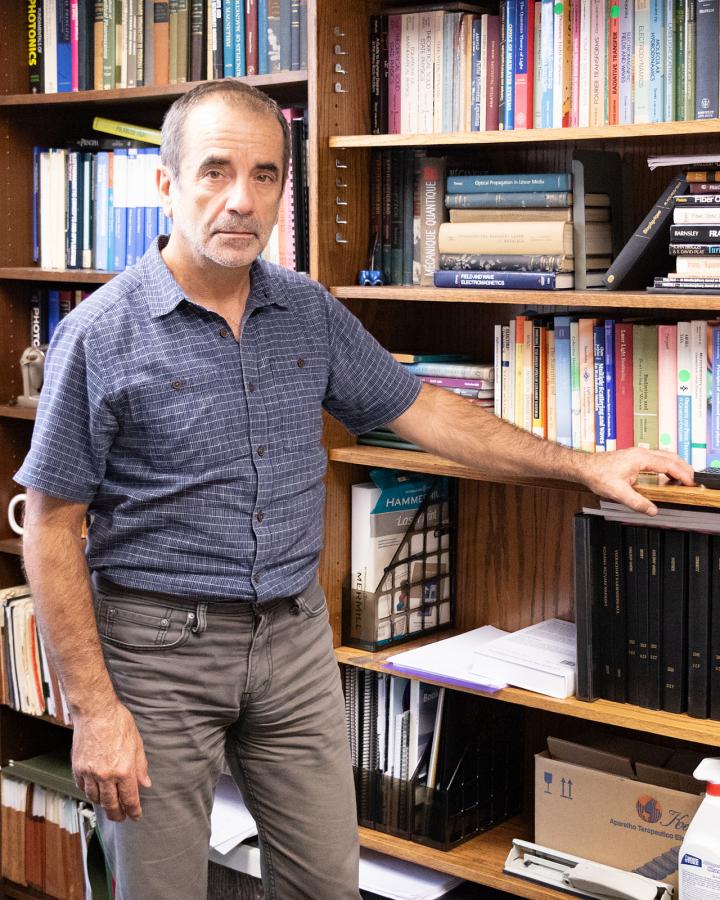 It's a bit complicated, but the new sensing method the UCF team developed could lend itself to a number of practical applications, including use in defense, surveillance, search and rescue and medicine.

Imagine trying to see something around a corner. This is easily done with mirrors, but imagine that light from the object can only reach the detector after it bounces off a diffusing wall that acts like a shattered mirror. Even though light looks totally dispersed, some of its initial properties do not completely vanish. Dogariu and his colleagues were able to measure subtle similarities in the scattered light, undo the effects of this broken mirror, and get an idea of what lies around the corner.

"The fact that fundamental properties are not completely destroyed when light bounces off a diffuse medium like a wall can be used in so many different ways," says Dogariu. "The question is, how much information you can still recover through this broken mirror-like surface."

When a digital picture is taken, the spatial distribution of light across an object is mapped point by point, pixel by pixel, onto the plane of the camera. However, in its propagation from object to the camera, properties of light can be affected by what the light reflects off of. When it reflects off of a mirror, a clear image can be produced. But when it is reflected off of a shattered mirror, for example, the direction of light is altered and only a distorted version of the image can be seen.

Dogariu and his colleagues have found a way to describe how this measure of similarity between two points, called spatial coherence of light, transfers in a reflection from a diffuse wall. By learning how the light transforms, the researchers can determine where the light came from. Dogariu describes their findings as an aspect of light propagation that has simply been overlooked before. By undoing the effects of the diffusing wall, Dogariu and his colleagues have eliminated the need to control the light that illuminates the target object.

This is the first time that there has been a practical demonstration of passively detecting an object around a corner in this way.

The technique does not recover a complete image but collects more than enough information needed for task oriented surveillance.

"The potential of this technique goes beyond sensing," says George Atia, a professor in EECS and member of a larger UCF team funded under Defense Advanced Research Projects Agency's Revolutionary Enhancement of Visibility by Exploiting Active Light-fields project that initiated this research. "Based on results of our recent simulations, we envision that non-line-of-sight, passive imaging of complex scenes could be achieved by data fusing that combines spatial coherence with additional intensity information."

Until now, detection of objects around a corner has only been possible by emitting light toward the object and modifying some of its properties, say by sending a pulse of light, the light will bounce off the diffuse wall, onto the object, to the diffuse wall again, and back to the detector. The amount of time the light takes to return to the detector is then used to triangulate the position of the object. The problem with such methods is that the emission of light discloses the intent to see, which can be problematic in covert situations.

The new sensing method is not specific to light. It could be applied for example to infrared or microwaves radiation.