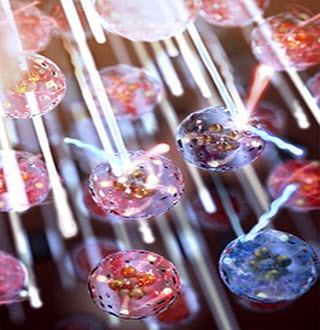 Artistic rendering of an intense x-ray beam interacting with metallic beryllium. In the central part of the image, two photons (white lines) interact simultaneously with a single electron of one of the beryllium atoms (sphere), emitting the electron (red streak) and a single higher energy photon (wavy blue line), while leaving the atom in an excited state (purple-blue color). Researchers found that the spectrum of the emitted high-energy photon disagreed with theoretical predictions.Image courtesy of: Joel BrehmFor the first time, researchers explored an extremely rare, but fundamental, process, in which two packets of light called photons scatter simultaneously from a single electron—in this case, from individual atoms in a beryllium metal target. Using the extremely high intensity x-ray laser at the Linac Coherent Light Source, they found that the details of this process deviated dramatically from expectations based on the usual assumption that the electrons behaved as quasi-free in the x-ray interaction. The researchers explain this anomaly in terms of a new x-ray matter interaction that they predict to have unprecedented specificity for light elements, like beryllium.

In addition to providing new fundamental insights about x-ray interactions, this discovery has broad implications for understanding and controlling the fastest processes in chemical reactivity and energy conversion. The work may lead to powerful new probe techniques at x-ray free electron laser facilities to provide fundamental understanding of ultrafast chemical processes.

The basis for atomic-scale structure determination involves the scattering of single x-ray photons, one at a time, from the electrons that make up all materials. Spatial resolution is achieved through a combination of the short wavelength of x-rays and the concentration of the electron density around the individual atoms. For x-ray interactions, these atomic electrons generally behave almost as if they were free. In special cases involving heavy atoms, researchers can achieve simultaneously a level of chemical specificity and spatial resolution, but this is not the case for the lighter atoms that are ubiquitous in most biological and energy-relevant materials. Thus, new methods to achieve chemical specificity for light atoms in structure determination would be revolutionary. In the current work, the researchers used the unprecedented x-ray intensity produced by the Linac Coherent Light Source x-ray laser to observe the concerted nonlinear Compton scattering of two identical hard x-ray photons from the light element beryllium to produce a single higher-energy photon. Not only did the researchers make the first observation of this fundamental process, they also observed an anomalously large shift toward longer wavelengths for the scattered photon. The large wavelength shift is indicative of an interaction that shows properties of scattering from bound (non-free) electrons, which implies that this process could be used as a chemically specific probe. Furthermore, because the nonlinear interaction requires the x-rays to coincide at precisely the same location in time and space, the mechanism is also applicable to studying the fastest processes involving electron motion in chemical reactivity and energy conversion.