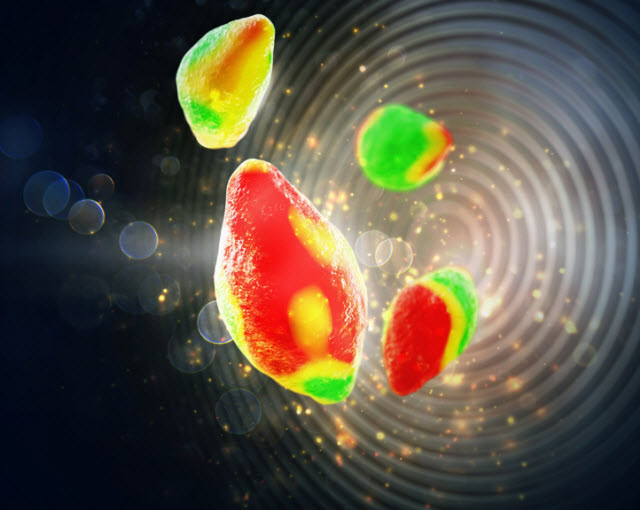 There’s a new tool in the push to engineer rechargeable batteries that last longer and charge more quickly. An X-ray microscopy technique recently developed at the Department of Energy’s Lawrence Berkeley National Laboratory (Berkeley Lab) has given scientists the ability to image nanoscale changes inside lithium-ion battery particles as they charge and discharge. The real-time images provide a new way to learn how batteries work, and how to improve them.

The method was developed at Berkeley Lab’s Advanced Light Source, a DOE Office of Science User Facility, by a team of researchers from the Department of Energy’s SLAC National Accelerator Laboratory, Berkeley Lab, Stanford University, and other institutions.

As reported today in the journal Science, the scientists used the approach to image micron-sized battery particles as lithium ions migrate in and out of the particles. The images chronicle the evolution of the particles’ chemical composition and reaction rates at a nanoscale spatial resolution and a minute-by-minute time resolution.

Among the findings, the scientists discovered the charging process doesn’t play out uniformly on the surface of a particle, a phenomenon that likely curbs battery performance over time. This and other insights obtained from the imaging technique could help researchers improve batteries for electric vehicles as well as smart phones, laptops, and other devices.

“The platform we developed allows us to image battery dynamics at the mesoscale, which is between a few nanometers and a few hundreds of nanometers,” says Will Chueh, a faculty scientist at the Department of Energy’s SLAC National Accelerator Laboratory, and an assistant professor of materials science & engineering at Stanford University, who led the research.

“This is a very difficult length scale to image in a functioning battery, but it’s critically important, because this is the scale that controls the fundamental processes involved in battery degradation and recharge time,” says Chueh.

The power of X-rays

The scientists developed the platform at the Advanced Light Source, which produces light in the X-ray region of the electromagnetic spectrum. The technique was implemented at two beamlines that offer high-performance scanning transmission X-ray microscopy (STXM), in which an extremely bright X-ray beam is focused onto a small spot.

Their specially designed “liquid electrochemical STXM nanoimaging platform” uses the facility’s soft X-rays to image lithium iron phosphate particles as they charge (delithiate) and discharge (lithiate) in a liquid electrolyte. Their experimental setup can image about thirty particles at a time.

In a real battery, thousands of these particles form an electrode, and positively charged lithium ions embed in the electrode as the battery charges. Ideally, the ions are inserted uniformly across the electrode’s surface. But this rarely happens, especially as a battery ages, which negatively affects performance.

“We now have a way to study this process in real time at the scale it’s occurring, which will help scientists better understand the process and possibly optimize it,” says David Shapiro, a physicist with the Advanced Light Source who helped Chueh develop the technique at the facility.

“Our STXM-based platform provides the ability to image these electrochemical changes within a single battery particle,” Shapiro adds. “And it offers the real-time resolution required to map the changes in the particles’ chemical composition and current densities, at a sub-particle scale, as the particles lithiate and delithiate.”

Shapiro and colleagues are now building even more powerful X-ray microscopes at the Advanced Light Source to improve the platform’s spatial resolution by a factor of ten. This will enable researchers to study battery particles that are much smaller than one micron. Smaller particles are known to perform better than larger particles, but scientists do not fully understand why.

“We are now working to achieve a spatial resolution approaching the soft x-ray wavelength, between one and five nanometers, with our X-ray microscopes,” says Shapiro. “This will enable us to image chemical phases within the smallest available particles, often less than 100 nanometers in size, and still give us the penetrating power to look at large volumes of material, such as thousands of battery particles. The goal is to image functional batteries with nanometer resolution via X-ray microscopy.”

This research was supported in part by the DOE Office of Science.

Lawrence Berkeley National Laboratory addresses the world’s most urgent scientific challenges by advancing sustainable energy, protecting human health, creating new materials, and revealing the origin and fate of the universe. Founded in 1931, Berkeley Lab’s scientific expertise has been recognized with 13 Nobel prizes. The University of California manages Berkeley Lab for the U.S. Department of Energy’s Office of Science. For more, visit www.lbl.gov.