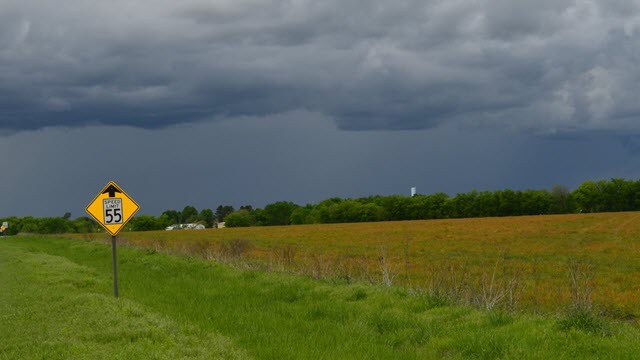 Farmland in eastern Oklahoma, one of the farflung regions that researchers have found are susceptible to simultaneous heat waves.Credit: Kevin Krajick/Earth Institute

Scientists have identified systematic meanders in the globe-circling northern jet stream that have caused simultaneous crop-damaging heat waves in widely separated breadbasket regions-a previously unquantified threat to global food production that, they say, could worsen with global warming. The research shows that certain kinds of waves in the atmospheric circulation can become amplified and then lock in place for extended periods, triggering the concurrent heat waves. Affected parts of North America, Europe and Asia together produce a quarter of the world food supply. The study appears this week in the journal Nature Climate Change.

"We found a 20-fold increase in the risk of simultaneous heat waves in major crop-producing regions when these global-scale wind patterns are in place," said lead author Kai Kornhuber, a postdoctoral researcher at Columbia University's Earth Institute. "Until now, this was an underexplored vulnerability in the food system. During these events there actually is a global structure in the otherwise quite chaotic circulation. The bell can ring in multiple regions at once."

Kornhuber warned that the heat waves will almost certainly become worse in coming decades, as the world continues to warm. The meanders that cause them could also potentially become more pronounced, though this is less certain. Because food commodities are increasingly traded on a global scale, either effect could lead to food shortages even in regions far from those directly affected by heat waves.

The jet stream is a fast-moving river of air that continuously circles the northern hemisphere from west to east. It generally confines itself to a relatively narrow band, but can meander north or south, due to a feature scientists call Rossby waves. Among other effects, these atmospheric wobbles may pull frigid air masses from the polar regions, or hot ones from the subtropics, into the populous midlatitudes. The wobbles strongly influence daily weather. When they become particularly large, they can bring prolonged heat waves, droughts or floods in summer; or in colder seasons, abnormal cold spells.

Because the earth's atmospheric circulation is so vast and complicated, only in recent years have scientists been able to pick out global patterns in the Rossby waves. The new study builds on previous discoveries of such patterns, and links them to measurable losses in crop production.

Researchers have identified two wavelengths of meanders in the northern hemisphere jet stream that can cause massive heat waves across several major agricultural regions at once. Here, a wave-7 pattern, which over the past 40 years has hurt crop yields in the red-marked areas of central/west North America, western Europe and western Asia.Credit: Adapted from Kornhuber et al., Nature Climate Change 2019

Combing through large amounts of climate data from 1979 to 2018, Kornhuber and colleagues zeroed in on two Rossby waves with specific wavelengths, termed wave-5 and wave-7; that is, north-south wobbles in the jet stream that produce either 5 or 7 peaks and corresponding troughs around the planet's circumference. They found that while waves of lower or higher lengths seem to wobble around randomly, wave-5 and wave-7 patterns can lock into a grid of symmetric, often much larger meanders centered over predictable regions. The wave-5 patterns tend to hover over central North America, eastern Europe and eastern Asia; the wave-7 patterns over western-central North America, western Europe and western Asia. In both cases, the results are the same: hot air swirls up from the south into the peaks, producing abnormal spikes in temperature that can go on for weeks. This in turn reduces rainfall, dries up soils and vegetation, and kills crops in each region.

"Normally, low harvests in one region are expected to be balanced out by good harvests elsewhere," said study coauthor Dim Coumou of the Institute for Environmental Studies at VU University Amsterdam, who has been studying Rossby waves for years. "These waves can cause reduced harvests in several important breadbaskets simultaneously, creating risks for global food production."

The scientists showed that in years when these amplified waves occurred during two or more summer weeks, cereal production went down 4 percent when averaged across all the affected regions, and as much as 11 percent in a single affected region. Food-price spikes often followed. The waves have hit in 1983, 2003, 2006, 2012, and 2018, when many temperature records fell across the United States, Canada, Scandinavia, and Siberia. In addition to killing crops, the waves have killed thousands of people, especially in Europe and Russia, where air conditioning is far less common than in North America.

While the study focuses mainly on hot spells in the Rossby waves' northern peaks, it also suggests that opposite extremes can occur in the southerly troughs. A precursor study by Kornhuber and others earlier this year noted that during the 2018 northern heat waves, more southerly regions including the Balkans and Japan saw extraordinary rains and destruction from flooding and landslides. During a 2010 northern heat outbreak in Russia, concurrent flooding on the Indus River in Pakistan displaced millions and destroyed crops.

Many scientists believe that Rossby waves will grow and stall more often as the planet warms. Kornhuber said that this scenario is quite plausible—almost all the global events have occurred since 2000—but adds there is not yet enough data to form a consensus on this. Regardless, he said, "even if the frequency or the size of the [Rossby] waves doesn't change, the heat extremes linked to the patterns will become more severe, because the atmosphere as a whole is heating."

Study coauthor Radley Horton, a climatologist at Columbia's Lamont-Doherty Earth Observatory, a part of the Earth Institute, said, "If climate models are unable to reproduce these wave patterns, risk managers such as reinsurers and food security experts may face a blind spot when assessing how simultaneous heat waves and their impacts could change in a warming climate."

Theodore Shepherd, a professor of climate science at the University of Reading in the United Kingdom who was not involved in the study, said, "We have strong observational evidence of this wave pattern. What is open for discussion is how it might respond to climate change." He noted that many consensus scientific statements, including those from the Intergovernmental Panel on Climate Change have proved to be underestimations of how fast and far the effects of global warming might move.