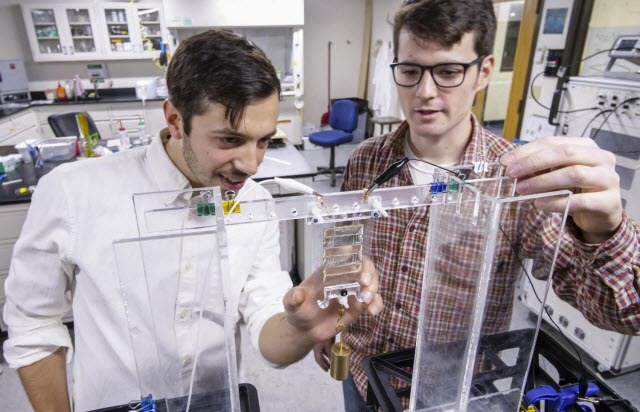 In the basement of the Engineering Center at CU Boulder, a group of researchers is working to create the next generation of robots.

But instead of the metallic droids you may be imagining, these robots are made from soft materials that react to applied voltage with a wide range of motions. Such soft robots contain tremendous potential for future applications as they adapt to dynamic environments and are well-suited to closely interact with humans. The soft devices can perform a variety of tasks, including grasping delicate objects, such as a raspberry and a raw egg, as well as lifting heavy objects.

A central challenge in the field known as “soft robotics” is a lack of actuators or “artificial muscles” that can replicate the versatility and performance of the real thing. The Keplinger Research Group in the College of Engineering and Applied Science has developed a new class of soft, electrically activated devices capable of mimicking the expansion and contraction of natural muscles. These devices, which can be constructed from a wide range of low-cost materials, are able to self-sense their movements and self-heal from electrical damage, representing a major advance in soft robotics.

The newly developed hydraulically amplified self-healing electrostatic (HASEL) actuators eschew the bulky, rigid pistons and motors of conventional robots for soft structures that exceed or match the strength, speed and efficiency of biological muscle. Their versatility may enable artificial muscles for human-like robots and a next generation of prosthetic limbs.

Three different designs of HASEL actuators are detailed in separate papers appearing in the journals Science and Science Robotics.

“We draw our inspiration from the astonishing capabilities of biological muscle,” said Christoph Keplinger, senior author of both papers, an assistant professor in the Department of Mechanical Engineering and a fellow of the Materials Science and Engineering Program.

“HASEL actuators synergize the strengths of soft fluidic and soft electrostatic actuators, and thus combine versatility and performance like no other artificial muscle before. Just like biological muscle, HASEL actuators can reproduce the adaptability of an octopus arm, the speed of a hummingbird and the strength of an elephant.”

One iteration of a HASEL device, described in Science, consists of a donut-shaped elastomer shell filled with an electrically insulating liquid (such as canola oil) and hooked up to a pair of opposing electrodes. When voltage is applied, the liquid is displaced and drives shape change of the soft shell. As an example of one possible application, the researchers positioned several of these actuators opposite of one another and achieved a gripping effect upon electrical activation. When voltage is turned off, the grip releases.

Another HASEL design is made of layers of highly stretchable ionic conductors that sandwich a layer of liquid and expands and contracts linearly upon activation to either lift a suspended gallon of water or flex a mechanical arm holding a baseball. 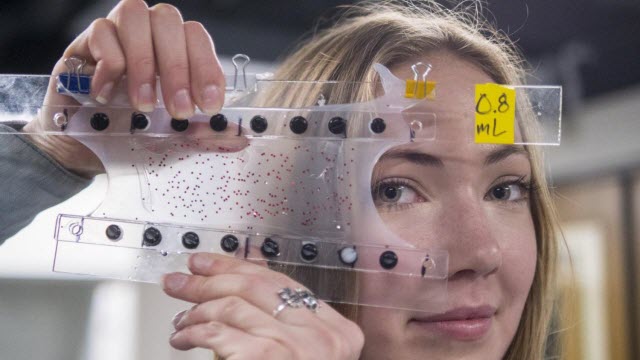 “The ability to create electrically powered soft actuators that lift a gallon of water at several times per second is something we haven’t seen before. These demonstrations show the exciting potential for HASEL” said Eric Acome, a doctoral student in the Keplinger group and the lead author of the Science paper. “The high voltage required for operation is a challenge for moving forward. However, we are already working on solving that problem and have designed devices in the lab that operate with a fifth of the voltage used in this paper.”

HASEL actuators can also sense environmental input, much like human muscles and nerves. The researchers attached a HASEL actuator to a mechanical arm and demonstrated the ability to power the arm while simultaneously sensing position.

A third design, detailed in Science Robotics, and known as a Peano-HASEL actuator, consists of three small rectangular pouches filled with liquid, rigged together in series. The polymer shell is made from the same low-cost material as a potato chip bag and is thin, transparent and flexible. Peano-HASEL devices contract on application of a voltage, much like biological muscle, which makes them especially attractive for robotics applications. Their electrically powered movement allows operation at speeds exceeding that of human muscle.

The versatility and simplicity of the HASEL technology lends itself to widespread industrial applications, both now and in the future. 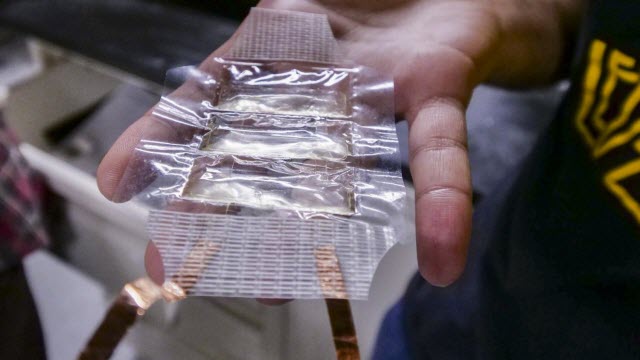 “We can make these devices for around 10 cents, even now,” said Nicholas Kellaris, also a doctoral student in the Keplinger group and the lead author of the Science Robotics study. “The materials are low-cost, scalable and compatible with current industrial manufacturing techniques.”

Future research will attempt to further optimize materials and geometry and explore advanced fabrication techniques in order to continue improving the HASEL platform and to rapidly enable practical applications.

The researchers have secured patents for the technology and are currently exploring commercial opportunities with the assistance of CU Boulder’s Technology Transfer Office.

“The research coming out of Dr. Keplinger’s lab is nothing short of astounding,” said Bobby Braun, dean of CU Boulder’s College of Engineering and Applied Science. “He and his team of students are helping create the future of flexible, more-humanlike robots that can be used to improve people’s lives and well-being. This line of research is a core, interdisciplinary strength of our college.”