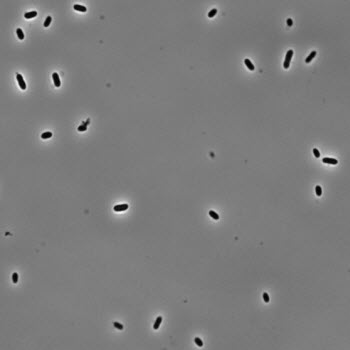 UNIVERSITY OF INDIANA, BREAH LASARREA bacterium that turns inedible plant parts into ethanol three- to five-times faster than baker’s yeast (Saccharomyces cerevisiae) can fix—or convert—atmospheric nitrogen gas into ammonium, according to a study published today (February 2) in PNAS. The results suggest that elemental nitrogen could one day replace the traditional industrially produced, expensive, and environmentally damaging ammonium added to biofuel reactors as the source of a nutrient that is necessary for the growth of microorganisms that break down plant cellulose into ethanol.

“It was known already that the Zymomonas genome contains all the genes that are needed, but nobody had checked whether they really are able to fix nitrogen,” said Uldis Kalnenieks of the University of Latvia, who was not involved in the research. “Yeast, which also can make ethanol, can’t fix nitrogen, so if another ethanol-producing microorganism can, that is an advantage.”

James “Jake” McKinlay of the University of Indiana and his colleagues had previously engineered a different bacterium, Rhodopseudomonas palustris, to fix nitrogen, with the aim of providing naturally produced ammonium to another species of bacteria in the same culture. To their surprise, the control culture of Z. mobilis on its own grew just as well on nitrogen gas as the coculture of Z. mobilis and nitrogen-fixing R. palustris. To investigate further, the scientists grew Z. mobilis with labeled nitrogen gas as the only source of the element, and found that the bacterium incorporated the label into its proteins.

Zymomonas is inefficient at making its own energy from glucose, gleaning just one molecule of energy-storing ATP per glucose molecule, compared with yeast, which nets two. “Low efficiency of energy production and, at the same time, this use of atmospheric nitrogen, which demands quite a lot of energy, is a very interesting combination,” said Kalnenieks.

Although nitrogen fixation and ethanol production are both energy-intensive processes, the added task of turning nitrogen gas into a form suitable for incorporation into biomolecules did not dampen the amount of ethanol produced by the bacterium from an input of predigested Miscanthus grass. “I fully expected that there would be some trade-off, but we didn’t see that,” McKinlay said. “Zymomonas just made less of itself.”

“It is most amazing that it [Z. mobilis] can keep up with its usual high ethanol-production performances,”Katherine Pappas of the University of Athens, who was not involved in the study, wrote in an e-mail. “This finding is exciting in both basic and applied directions.”

“It would be intriguing to unveil the regulation of nitrogen fixation in Zymomonas and illustrate its ultimate role in the physiology of this organism,” she added. Both Pappas and Steve Brown of Oak Ridge National Laboratory in Tennessee, who also was not part of the research, suggested testing the importance of nitrogenase in nitrogen fixation by using a Z. mobilis strain lacking the gene encoding it or deleting it.

“The genes might have been there and annotated in the past, but this [study] now enables perhaps the industrial side to develop it,” Brown said. “This opens the door to further studies in this system so I think that’s a pretty exciting result.”

“It’s an excellent approach, but it’s not a fait accompli by a long shot,” said James “Jim” McMillan of the National Renewable Energy Laboratory in Golden, Colorado. “How far it can go into commercial production remains to be seen.” One concern is the bacterium’s slow growth rate when it is both pumping out ethanol and fixing nitrogen. “While the low cell mass yield is good from the standpoint of maximizing the amount of carbon that can go to ethanol production, it makes Zymomonas more vulnerable to be outgrown by undesirable contaminating microbes,” McMillan added in an e-mail.

The advantageous ethanol production under atmospheric nitrogen might also change if Zymomonas is grown in continuous cultures instead of the small batches in McKinlay’s study, suggested Tom Richard of Pennsylvania State University who was not involved in the work. McKinlay agreed that determining the potential economic benefits of atmospheric nitrogen over ammonium in biofuel production would require testing on a much larger scale.

Still, many researchers are intrigued by the potential implications of Zymomonas’s newfound nitrogen-fixing capability. “It’s a very interesting and promising study,” said Richard.

- This article was originally published February 2, 2015 in our sister publication, The Scientist

Stronger Together: How Protein Filaments Interact

Stronger Together: How Protein Filaments Interact