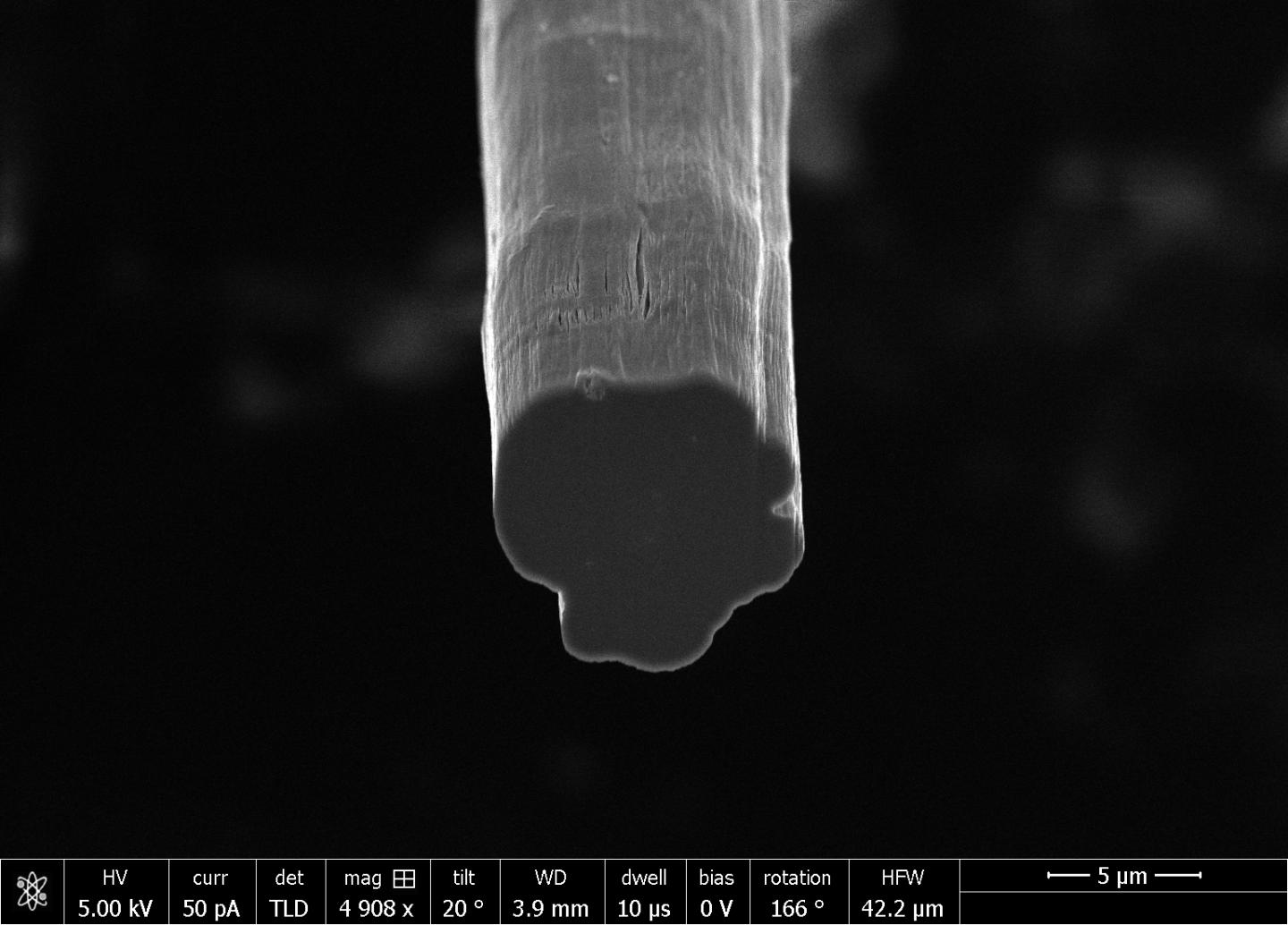 The cross-section of a fiber produced at Rice University contains tens of millions of carbon nanotubes. The lab continually improves its method to make fibers, which tests show are now stronger than Kevlar.
Pasquali Research Group/Rice University

HOUSTON, TX — August 17, 2020 — Carbon nanotube fibers made at Rice University are now stronger than Kevlar and are inching up on the conductivity of copper.

The Rice lab of chemical and biomolecular engineer Matteo Pasquali reported in Carbon it has developed its strongest and most conductive fibers yet, made of long carbon nanotubes through a wet spinning process.

In the new study led by Rice graduate students Lauren Taylor and Oliver Dewey, the researchers noted that wet-spun carbon nanotube fibers, which could lead to breakthroughs in a host of medical and materials applications, have doubled in strength and conductivity every three years, a trend that spans almost two decades.

While that may never mimic Moore's Law, which set a benchmark for computer chip advances for decades, Pasquali and his team are doing their part to advance the method they pioneered to make carbon nanotube fibers.

The lab's threadlike fibers, with tens of millions of nanotubes in cross section, are being studied for use as bridges to repair damaged hearts, as electrical interfaces with the brain, for use in cochlear implants, as flexible antennas and for automotive and aerospace applications.

They are also part of the Carbon Hub, a multiuniversity research initiative launched in 2019 by Rice with support from Shell, Prysmian, and Mitsubishi to create a zero-emissions future.

"Carbon nanotube fibers have long been touted for their potential superior properties," Pasquali said. "Two decades of research at Rice and elsewhere have made this potential a reality. Now we need a worldwide effort to increase production efficiency so these materials could be made with zero carbon dioxide emissions and potentially with concurrent production of clean hydrogen."

"The goal of this paper is to put forth the record properties of the fibers produced in our lab," Taylor said. "These improvements mean we're now surpassing Kevlar in terms of strength, which for us is a really big achievement. With just another doubling, we would surpass the strongest fibers on the market."

The flexible Rice fibers have a tensile strength of 4.2 gigapascals (GPa), compared to 3.6 GPa for Kevlar fibers. The fibers require long nanotubes with high crystallinity; that is, regular arrays of carbon-atom rings with few defects. The acidic solution used in the Rice process also helps reduce impurities that can interfere with fiber strength and enhances the nanotubes' metallic properties through residual doping, Dewey said.

"The length, or aspect ratio, of the nanotubes is the defining characteristic that drives the properties in our fibers," he said, noting the surface area of the 12-micrometer nanotubes used in Rice fiber facilitates better van der Waals bonds. "It also helps that the collaborators who grow our nanotubes optimize for solution processing by controlling the number of metallic impurities from the catalyst and what we call amorphous carbon impurities." 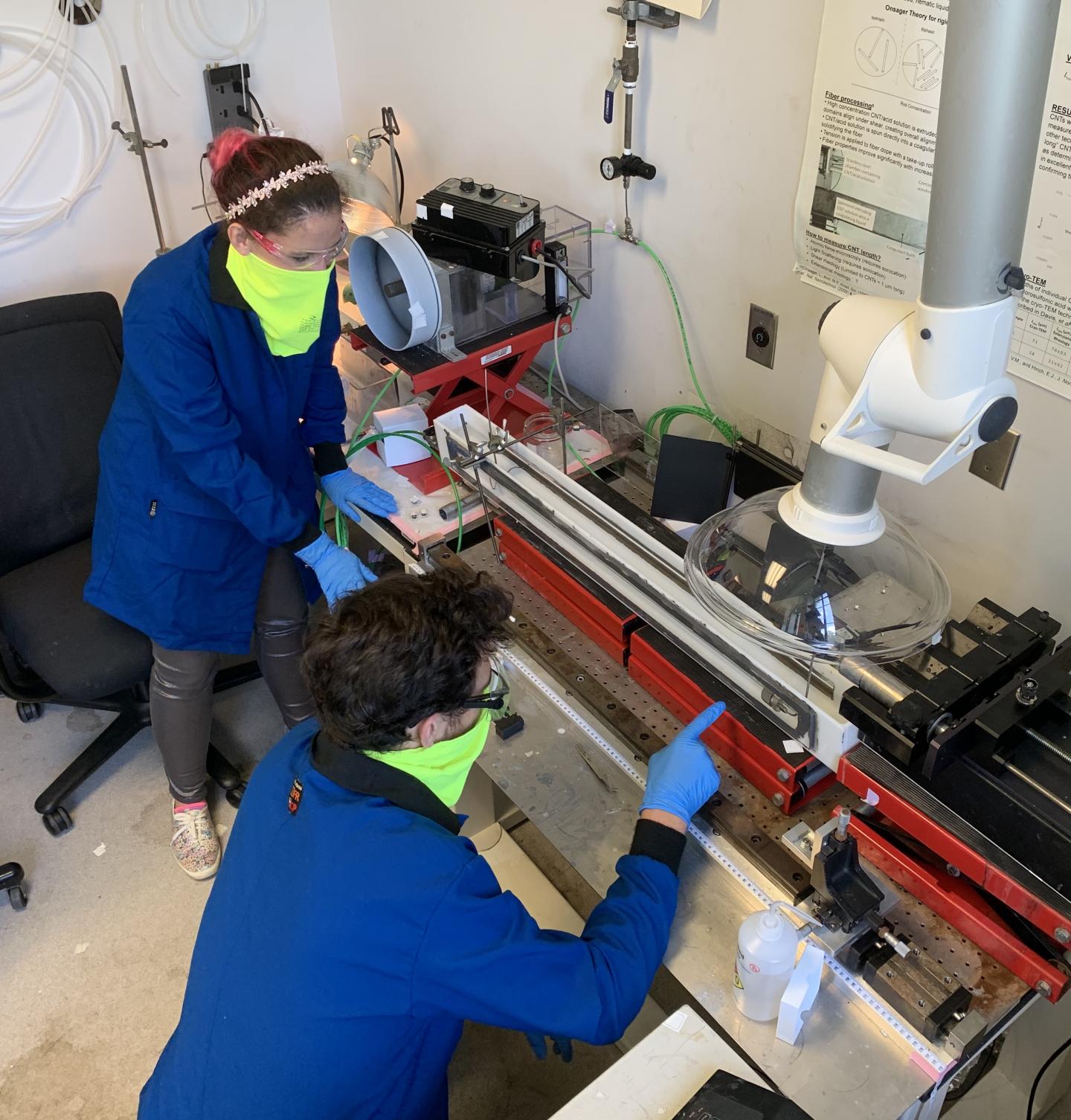 The researchers said the fibers' conductivity has improved to 10.9 megasiemens (million siemens) per meter. "This is the first time a carbon nanotube fiber has passed the 10 megasiemens threshold, so we've achieved a new order of magnitude for nanotube fibers," Dewey said. Normalized for weight, he said the Rice fibers achieve about 80 percent of the conductivity of copper.

"But we're surpassing platinum wire, which is a big achievement for us," Taylor said, "and the fiber thermal conductivity is better than any metal and any synthetic fibers, except for pitch graphite fibers."

The lab's goal is to make the production of superior fibers efficient and inexpensive enough to be incorporated by industry on a large scale, Dewey said. Solution processing is common in the production of other kinds of fibers, including Kevlar, so factories could use familiar processes without major retooling.

"The benefit of our method is that it's essentially plug-and-play," he said. "It's inherently scalable and fits in with the way synthetic fibers are already made."

"There's a notion that carbon nanotubes are never going to be able to obtain all the properties that people have been hyping now for decades," Taylor said. "But we're making good gains year over year. It's not easy, but we still do believe this technology is going to change the world."

The US Air Force Office of Scientific Research, the Robert A. Welch Foundation, the Department of Energy's Advanced Manufacturing Office, and the Advanced Research Projects Agency-Energy supported the research.