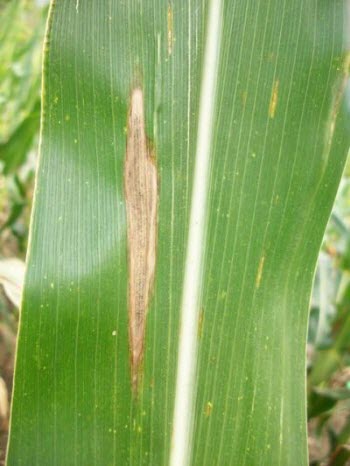 Fungal genes that cause northern corn leaf blight have recently been identified, paving the way for more resistant corn varieties in the future.Photo credit: Santiago MiderosURBANA, Ill. — Midwestern corn growers know the symptoms of northern corn leaf blight all too well: greenish-gray lesions on the leaves that can add up to major yield losses if not detected and treated early. Resistance genes have been identified in corn, but the fungal disease has found ways to sneak around corn's defenses. Now, researchers have figured out how the fungus is outsmarting corn, and they may be able to use this information to help corn fight back.

"We were looking for genes in the fungus that trigger disease in corn. With this information, corn breeders could someday build more durable resistance in future hybrids," says Santiago Mideros, plant pathologist in the Department of Crop Sciences at the University of Illinois.

In a new study published in the journal Phytopathology, Mideros and his colleagues identified two of the genes that cause disease in corn. But in order to understand the significance of the results, it's important to know how fungal and corn genes interact.

The interaction between corn and fungal genes has been known for decades, but until now, scientists didn't know the molecular makeup of those genes in the fungus, or where they were located in the genome. To obtain this information, the research team mated different strains of the fungus: one that causes disease on Ht1 corn plants, and one that doesn't. They then mapped the genes of the resulting progeny.

"Based on data from the progeny, we could detect which gene allows the fungus to cause disease," Mideros explains. They confirmed the location for one fungal gene involved in the disease, AVRHt1, and found a candidate location for another, AVRHt2. The researchers also identified molecular markers that should make identifying disease-causing strains easier in the future.

"Now that we have molecular markers, we could sample the environment and find out which strains of the pathogen are out there. Eventually, farmers might be able to plant corn varieties that are resistant to specific pathogens present in their area," Mideros says.

Mideros emphasizes that much more work is needed to get to a future like that, but the first step is now out of the way.