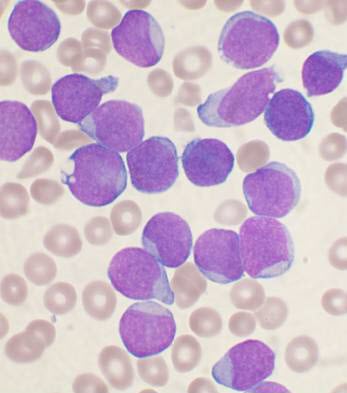 A Wright's stained bone marrow aspirate smear of patient with precursor B-cell acute lymphoblastic leukemia.Image credit: VashiDonsk, Wikimedia CommonsHERSHEY, Pa. — Researchers at the Penn State College of Medicine, working with Chinese and American colleagues, have discovered a novel way to enhance and restore cancer suppressor activity in B-cell acute lymphoblastic leukemia, resulting in better outcomes in a pre-clinical model of the disease. The finding could pave the way for a new class of drugs for this and other forms of leukemia.

B-cell acute lymphoblastic leukemia (B-ALL) is an aggressive cancer that originates from a type of white blood cell called the B lymphocyte. In the United States, about 2,600 children and 1,900 adults develop B-ALL annually. Thanks to improvements in chemotherapy over the past half-century, survival rates have improved, but about 1,000 Americans still die from the disease every year, mainly from a subtype called high-risk B-ALL.

Patients with high-risk B-ALL are most likely to relapse after treatment. Most of them have one thing in common, according to Dr. Sinisa Dovat, associate professor of pediatrics: impaired activity of a protein called Ikaros that prevents the development and progression of leukemia.

Related article: Avocados May Hold the Answer to Beating Leukemia

"We normally have two copies of this gene in our DNA, but in patients with high-risk B-ALL, one copy of the Ikaros gene typically has been deleted or mutated," Dovat said.

Until now, it was not considered possible to enhance the function of Ikaros if one copy was missing or mutated. Current therapies for high-risk B-ALL are aimed at targeting the pathways that promote rather than those that fight leukemia.

Dovat's team set out to gain a better understanding of how impairments in Ikaros function occur in B-ALL, which they hoped could help them develop a drug to target and improve the protein's activity.

Study findings were published in the journal Blood.

First, the research team identified one of the mechanisms used by Ikaros to prevent leukemia. Ikaros's function is to bind DNA and regulate the activity of a large number of genes in cells. The researchers found that the ability to control gene activity allows Ikaros to act as a master regulator of the function of blood cells. The protein normally keeps blood cells in check, preventing them from multiplying indefinitely.

"If Ikaros's function is reduced or impaired, blood cells escape its control and begin to multiply rapidly, which results in high-risk leukemia," Dovat said.

In the study, functional Ikaros protein produced from the one remaining normal Ikaros gene was restored with a novel class of drugs that target a specific enzyme called casein kinase 2 or CK2.

CK2 has highly elevated activity in leukemia, as well as in other types of cancers. The researchers found that CK2 directly impairs the function of Ikaros.

"Thus, in high-risk B-ALL, we have one copy of Ikaros missing or mutated, while the protein produced from the other copy of the Ikaros gene is not functioning well due to the high level of CK2," Dovat said.

A new drug tested by Dovat and his collaborators inhibits the enzyme. This CK2 inhibitor restored Ikaros function and resulted in a strong therapeutic effect in cancer cells from B-ALL patients. The drug greatly reduced cancer cell proliferation and survival.

This is the first time a strategy of this type has been designed for the treatment of leukemia.

"The typical therapeutic approach targets proteins that cause cancer or leukemia," Dovat said. "Enhancing the function of proteins that are fighting leukemia is an approach that is rarely used."

Dovat is now studying the optimal dose for CK2 inhibitors and determining how to incorporate the novel drug into current treatments.

"Using our preclinical model, we will determine what existing chemotherapies can be combined with this novel drug type to produce the best therapeutic effects," he said.

In addition to B-ALL, the findings have implications for other types of leukemia, such as acute myeloid leukemia and T-cell acute lymphoblastic leukemia, and other cancers where the loss of Ikaros function plays a role. The researchers plan to test CK2 inhibitors in these diseases.