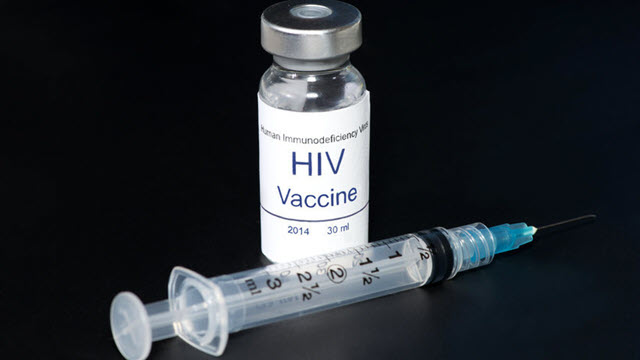 New research published in The Lancet shows that an experimental HIV-1 vaccine regimen is well-tolerated and generated comparable and robust immune responses against HIV in healthy adults and rhesus monkeys. Moreover, the vaccine candidate protected against infection with an HIV-like virus in monkeys.

Based on the results from this phase 1/2a clinical trial that involved nearly 400 healthy adults, a phase 2b trial has been initiated in southern Africa to determine the safety and efficacy of the HIV-1 vaccine candidate in 2,600 women at risk for acquiring HIV. This is one of only five experimental HIV-1 vaccine concepts that have progressed to efficacy trials in humans in the 35 years of the global HIV/AIDS epidemic.

Previous HIV-1 vaccine candidates have typically been limited to specific regions of the world. The experimental regimens tested in this study are based on 'mosaic' vaccines that take pieces of different HIV viruses and combine them to elicit immune responses against a wide variety of HIV strains.

He adds: "These results should be interpreted cautiously. The challenges in the development of an HIV vaccine are unprecedented, and the ability to induce HIV-specific immune responses does not necessarily indicate that a vaccine will protect humans from HIV infection. We eagerly await the results of the phase 2b efficacy trial called HVTN705, or 'Imbokodo', which will determine whether or not this vaccine will protect humans against acquiring HIV."

Almost 37 million people worldwide are living with HIV/AIDS, with an estimated 1.8 million new cases every year. A safe and effective preventative vaccine is urgently needed to curb the HIV pandemic.

In the 35 years of the HIV epidemic, only four HIV vaccine concepts have been tested in humans, and only one has provided evidence of protection in an efficacy trial—a canarypox vector prime, gp120 boost vaccine regimen tested in the RV144 trial in Thailand lowered the rate of human infection by 31 percent but the effect was considered too low to advance the vaccine to common use.

A key hurdle to HIV vaccine development has been the lack of direct comparability between clinical trials and preclinical studies. To address these methodological issues, Barouch and colleagues evaluated the leading mosaic adenovirus serotype 26 (Ad26)-based HIV-1 vaccine candidates in parallel clinical and pre-clinical studies to identify the optimal HIV vaccine regimen to advance into clinical efficacy trials.

The APPROACH trial recruited 393 healthy, HIV-uninfected adults (aged 18-50 years) from 12 clinics in east Africa, South Africa, Thailand, and the USA between February 2015 and October 2015. Volunteers were randomly assigned to receive either one of seven vaccine combinations or a placebo, and were given four vaccinations over the course of 48 weeks.

To stimulate, or "prime," an initial immune response, each volunteer received an intramuscular injection of Ad26.Mos.HIV at the start of the study and again 12 weeks later. The vaccine containing "mosaic" HIV Env/Gag/Pol antigens was created from many HIV strains, delivered using a nonreplicating common-cold virus (Ad26).

To "boost" the level of the body's immune response, volunteers were given two additional vaccinations at week 24 and 48 using various combinations of Ad26.Mos.HIV or a different vaccine component called Modified Vaccinia Ankara (MVA) with or without two different doses of clade C HIV gp140 envelope protein containing an aluminium adjuvant.

Results showed that all vaccine regimens tested were capable of generating anti-HIV immune responses in healthy individuals and were well tolerated, with similar numbers of local and systemic reactions reported in all groups, most of which were mild-to-moderate in severity. Five participants reported at least one vaccine-related grade 3 adverse event such as abdominal pain and diarrhea, postural dizziness, and back pain. No grade 4 adverse events or deaths were reported.

In a parallel study, the researchers assessed the immunogenicity and protective efficacy of the same Ad26-based mosaic vaccine regimens in 72 rhesus monkeys using a series repeated challenges with simian-human immunodeficiency virus (SHIV)—a virus similar to HIV that infects monkeys.

The Ad26/Ad26 plus gp140 vaccine candidate induced the greatest immune responses in humans and also provided the best protection in monkeys—resulting in complete protection against SHIV infection in two-thirds of the vaccinated animals after six challenges.

The authors note several limitations, including the fact that that the relevance of vaccine protection in rhesus monkeys to clinical efficacy in humans remains unclear. They also note that there is no definitive immunological measurement that is known to predict protection against HIV-1 in humans.

Writing in a linked Comment, Dr. George Pavlakis and Dr. Barbara Felber from the National Cancer Institute at Frederik, Maryland, USA say: "Efficacy studies are necessary to determine protective ability in humans and also for the discovery of correlates of protection and for determining whether the same or different immune correlates apply for different vaccine regimens. It remains to be determined whether improved efficacy over RV144 will be achieved by either of the present efficacy trials (NCT02968849; NCT03060629). New vaccine concepts and vectors are in development and can progress to efficacy trials, which is an important process since development of an AIDS vaccine remains urgent. Despite unprecedented advances in HIV treatment and prophylaxis, the number of people living with HIV infection continues to increase worldwide. Implementation of even a moderately effective HIV vaccine together with the existing HIV prevention and treatment strategies is expected to contribute greatly to the evolving HIV/AIDS response. It is therefore essential that a commitment to pursue multiple vaccine development strategies continues at all stages."

This study was funded by Janssen Vaccines & Prevention BV, US National Institutes of Health, Ragon Institute of MGH, MIT and Harvard, Henry M Jackson Foundation for the Advancement of Military Medicine, US Department of Defense, and International AIDS Vaccine Initiative.