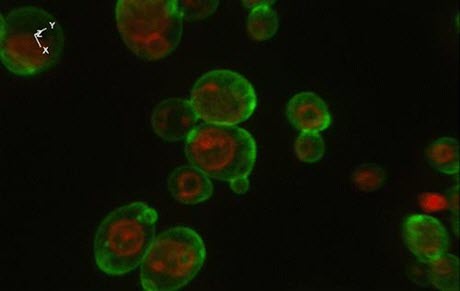 This 3D image was created by stacking a set of optically sliced images taken using a confocal fluorescence microscope. It can be seen that eGFP is immobilized along the budding yeast's characteristic cell shape.Credit: Kobe UniversityA research team at Kobe University has developed a method of artificially controlling the anchorage position of target proteins in engineered baker's yeast (Saccharomyces cerevisiae).

The group, consisting of academic researcher Kentaro Inokuma, professor Tomohisa Hasunuma (both of the Engineering Biology Research Center), and professor Akihiko Kondo, et al. (of the Graduate School of Science, Technology and Innovation) demonstrated that this technique could be utilized to improve the amount of ethanol produced from hydrothermally-processed rice straw by 30 percent. It is expected that these results will contribute to improved yeast functionality in cell surface engineering, which is utilized in a variety of fields such as bio-production and medicine.

The journal paper for this research was published in Metabolic Engineering on November 9, 2019. This study was conducted in collaboration with researchers from the University of the Western Cape and Stellenbosch University under the JSPS (Japan Society for the Promotion of Science) bilateral program with South Africa. The research was also carried out as part of Kobe University and MEXT's 'Innovative BioProduction Kobe' project, and was supported by JSPS KAKENHI grant number JP18K05554. 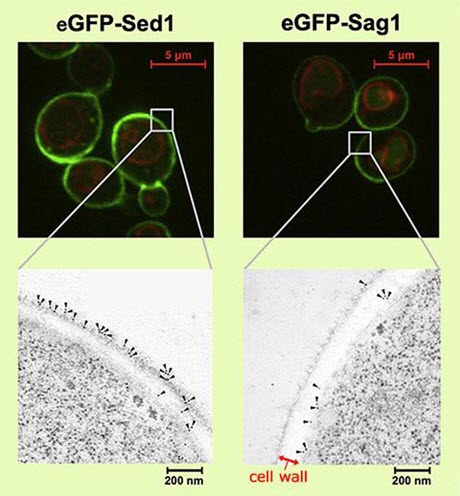 Above: confocal fluorescence microscope image of yeast cells: Image shows the enhanced green fluorescent protein (eGFP) (in green) and the vacuolar membranes (in red) in the cells. The Sed1-anchored eGFPs (left) are mainly located on the cell surface, whereas a part of the Sag1-anchored eGFPs are located in the intracellular vacuoles and the amount of Sag1-anchored eGFP transported to the cell surface is comparatively low. Below: Immunoelectron-microscope image showing the yeast cell wall: The arrowheads indicate the location of the eGFP. Sed1-anchored eGFP is mostly located outside the cell wall, whereas Sag1-anchored eGFP is mostly positioned inside the cell wall.Credit: Kobe UniversityCell surface engineering is a technique with applications in a variety of industrial and biotechnological fields. This technique can create microorganisms that can degrade biomass efficiently, allowing biofuels to be produced. In medical fields, cell surface engineering can also be utilized for the screening of antibodies with high antigen-binding capacity. Baker's yeast (or Saccharomyces cerevisiae) is often used as a host microorganism for this technique because its characteristics are well understood. This yeast has a cell wall that is between 100-200 nm thick and consists of a microfibrillar array of glucan chains. The cell wall provides space to display functional proteins. 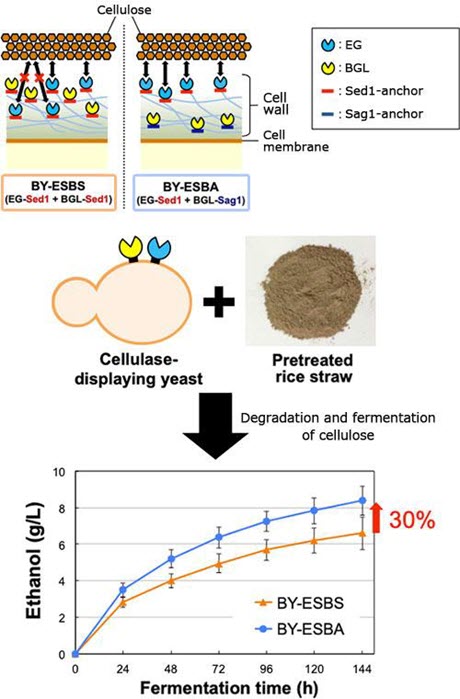 This technique allowed the enzymes to be placed in the optimal positions for their functions—endoglucanase, which requires direct contact with large cellulose molecules, was anchored to the outside layer of the yeast cell wall, whereas β—glucosidase was anchored to the inside because it doesn't require the direct contact. This allowed more efficient use of the yeast cell wall space and succeeded in increasing the cellulose degradation ability.Credit: Kobe UniversityThe experiments were conducted using the two anchoring domains (the Sed1-anchor and Sag1-anchor) often utilized in Saccharomyces cerevisiae cell surface engineering. Enhanced green fluorescence protein (eGFP) was used as the target protein. Confocal fluorescence microscopic and immunoelectron-microscopic analyses were performed to investigate how the anchoring domains affected where the eGFP was localized in yeast cell. These analyses revealed that the eGFP that fused with the Sed-1 anchoring domain were mainly located on the outermost layer of the cell wall, whereas the Sag1-anchored eGFP were predominantly positioned inside the cell wall (Figure 1). This result suggested that it was possible to artificially manipulate the location of the proteins on the yeast cell wall by changing the fused anchoring domain.

Next, an experiment was carried out to demonstrate if this method could be utilized to increase the ethanol productivity from hydrothermally-processed rice straw. Saccharomyces cerevisiae cells were used in the simultaneous saccharification and fermentation of the pretreated rice straw. This process converts the cellulose contained in the rice straw into ethanol. In this experiment, β-glucosidase (BGL) and endoglucanase (EG) were displayed on the yeast cell surface. These enzymes play different roles in breaking down the cellulose. EG breaks down large cellulose molecules at random, whereas BGL dissolves the smaller sugars (oligosaccharide) into glucose. Sed1- and Sag1-anchor domains were used to reposition the enzymes—with EG on the outermost layer and BGL on the interior of the cell wall. This efficient positioning resulted in a 30 percent greater yield of ethanol (Figure 2).

Discussions on how to improve cell surface engineering efficiency have often centered on anchoring a large number of target proteins to the surface. The current study revealed that controlling the location of the target proteins played an important role in cell functionality, and this could provide a new strategy for improving this technology. The ethanol fermentation experiment of pretreated rice straw demonstrated in this study indicates that it is possible to position the two enzymes (EG and BGL) in locations suitable for them in the yeast cell wall. In addition, this strategy could also be utilized in other applications; for example in medicine, placing antibodies on the outermost layer of the cell wall could improve their accessibility to large antigens. Therefore, it is expected that this new strategy will improve the functionality of cell-surface engineered yeast across a wide range of fields.