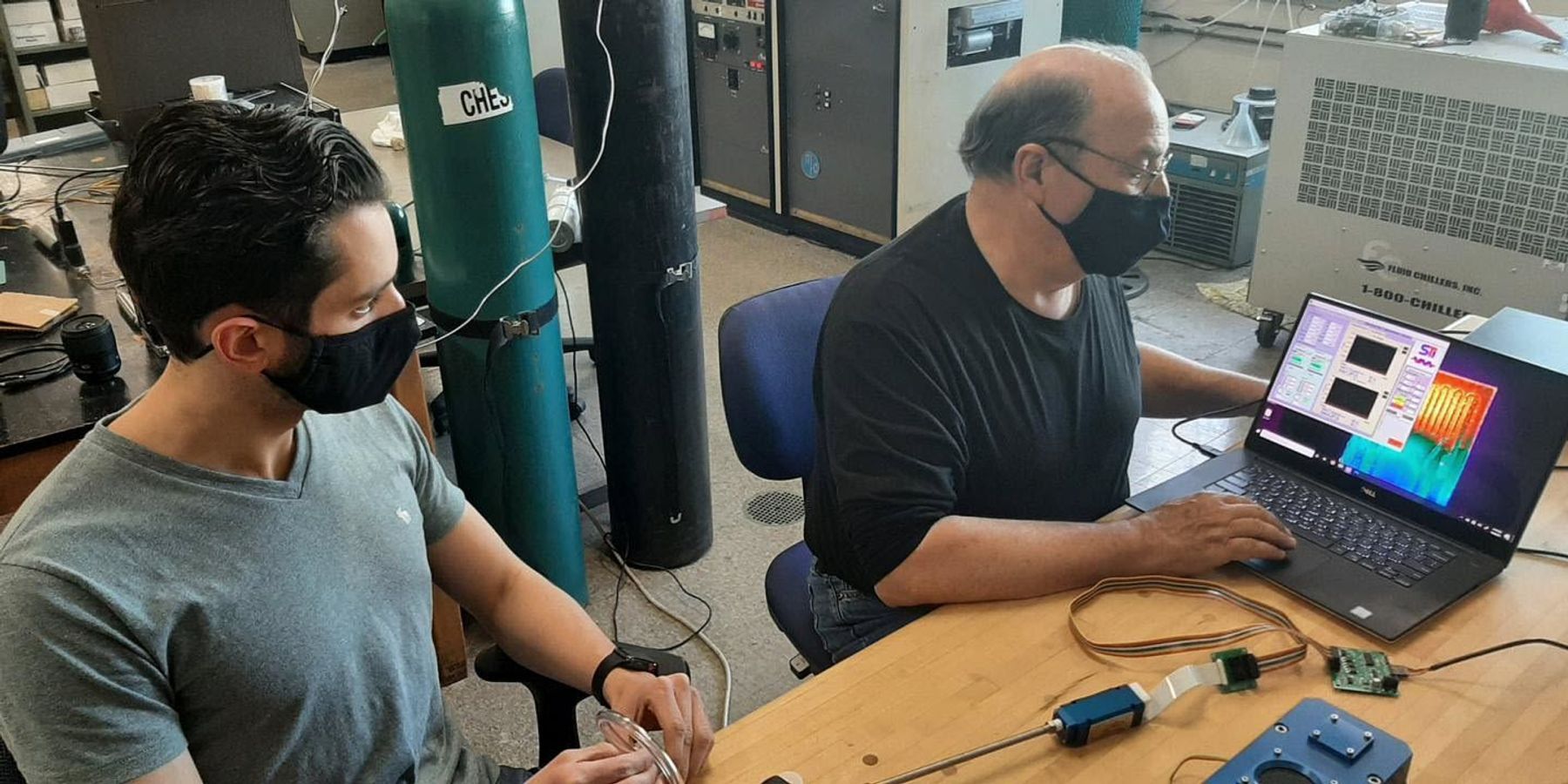 KINGSTON, RI — May 14, 2021 — We are frequently reminded of how vulnerable our health and safety are to threats from nature or those who wish to harm us.

New sensors developed by professor Otto Gregory, of the College of Engineering at the University of Rhode Island, and chemical engineering doctoral student Peter Ricci, are so powerful that they can detect threats at the molecular level, whether it's explosive materials, particles from a potentially deadly virus or illegal drugs entering the country.

"This is potentially life-saving technology," said Gregory. "We have detected things at the part-per-quadrillion level. That's really single molecule detection."

Because Gregory's sensors are so small and so powerful, there is a wide range of applications.

While his research is largely funded by the Department of Homeland Security, other government agencies have taken notice of Gregory's sensors.

The Department of Defense may be interested in using it to monitor wounds in soldiers and to detect roadside improvised explosive devices (IEDs).

If a soldier or first responder suffered an open wound from shrapnel, Gregory's sensors could help determine if the wound became infected.

"Hydrogen peroxide generated by the human body for wounds is an indication of how good or how bad antibiotics are working to fight the wound," said Ricci. "Our sensor could be used as a wearable device to sniff out peroxide coming from the wound at the part-per-billion level."

At Miami Heat basketball games, dogs have been used to sniff traces of COVID-19 coming from the pores in people's skin. In an article published in the Nature journal Scientific Reports, Gregory stated that his sensors could be used for the same purpose.

"Where dogs are detecting it from the skin, our sensors would detect it from biomarkers in people's breath," Ricci said, who is from West Warwick.

The Coast Guard has shown an interest in using the technology to "sniff out" illegal drugs being smuggled into the United State aboard ships.

"Anything that can typically be sniffed out by a dog we can do," said Gregory. "That's why we've called it the Digital Dog Nose."

The Digital Dog Nose was featured on shows such as CBS This Morning in November 2019, but what was once the size of a toolbox has been reduced to a quarter of the size of a pack of cigarettes.

One of the keys to making a device as small and powerful as Gregory's is to find the right battery.

"We have partnered with a company that makes very thin, low-mass batteries in Colorado called ITN Energy Systems," Gregory said. "They make lithium batteries that are no thicker than a piece of paper. The process has been about finding the right partners, which helps us improve our catalysts and improve our sensor platform."

In March 2021, the Naval Research Laboratory brought its mobile testing unit to URI's W. Alton Jones Campus to put Gregory's explosives sensors and others to the test.

"They set up a field test outside using their vapor test bed," said Ricci. "They were able to select an explosive molecule and deliver it to the sensor system. Knowing what the level was, they wanted to see how our sensor would respond. One of the tests was at the part-per-quadrillion level."

Staying a step ahead

As bad guys have developed new explosives or new ways to improvise on existing explosives, the good guys have tried to stay a step ahead.

"The Department of Homeland Security has asked us to be flexible enough to anticipate and adapt to emerging threats that may come several years down the road," said Gregory. "We can tweak our catalysts for a specific molecule that is the current threat. That's what we do with biomarkers. That's what we do with drugs. What's nice about this platform is that it's flexible."

The sensors Gregory and Ricci have developed have been tested and improved upon over a long period of time. The professor's research was originally funded 20 years ago by the Defense Advanced Research Projects Agency (DARPA), a research and development agency of the United States Department of Defense that is responsible for the development of emerging technologies for use by the military.

After two years of DARPA funding, the Army funded the project for a year. The Department of Homeland Security has provided funding ever since.

"At the time, this research was very novel and very different," said Gregory. "DARPA funds projects that are high risk, high reward. We've demonstrated that the gamble they took on our concept back then has paid off."

Michael Silevitch, the Robert D. Black Distinguished Professor of Engineering at Northeastern University, has collaborated with Gregory on his research for more than 10 years.

"This is breakthrough technology," said Silevitch. "Otto's work on chemical detectors has evolved to the point of being ready for use in many applications, including the deployment of his sensors on a drone-based platform to help protect soft targets such as schools, shopping malls or places of worship."

Now that the sensors are very small and lightweight, they could be attached to drones, leading to many new applications.

"We've been talking to drone companies about using our sensors on their drones," said Gregory. "Drones need very lightweight, portable power supplies and you have to tap into their wireless communication. It's a much different set of engineering conditions than using a robot arm that the Army is looking to use for roadside IEDs."

Gregory and Ricci are also working on sensor arrays, to differentiate one explosive, or threat, from another.

"We'll need an array of sensors to detect a specific explosive in the presence of other explosives or precursors," said Ricci. "If there's a plume of three different explosives, we may need to identify one from the others."

Now that the sensors have proven to be effective, implementing them in real-world situations is just a matter of funding.

"Our sensor is not an off-the-shelf commercial product yet, but we have a potential partner," Gregory said. "We just need a customer to step up to the plate and say here's an order for 1,000 of these, can you deliver them?"

- This press release was originally published on the URI Today website. It has been edited for style