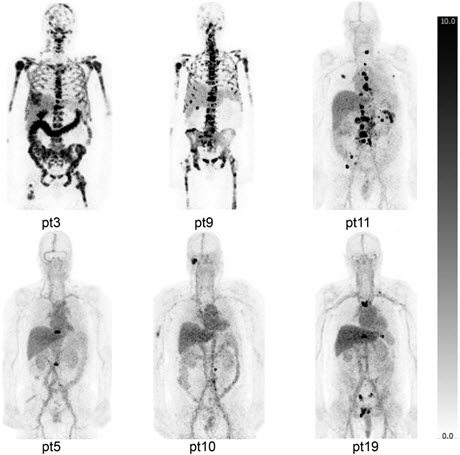 Images were acquired six days after injection and are displayed at same gray scale with SUVmax of 10. Patients in upper panel (particularly patients 3 and 9) have extensive metastatic bone disease. Uptake in noninvolved bone is low and not definitely seen in projection images. Physiologic blood-pool activity was prominent soon after injection, and much less blood-pool activity is seen in late images in those with more extensive bony disease. Uptake in liver is partially reflective of blood-pool activity and parenchymal accumulation. Low-level uptake is also noted in kidneys, and variable uptake is noted in bowel (intraluminal), which probably represents route of excretion.Credit: Jorge A. Carrasquillo, Bernard M. Fine, Neeta Pandit-Taskar, Steven M. Larson et al. Memorial Sloan Kettering Cancer Center and Genentech Inc.A recently discovered prostate cancer-selective antigen has been identified as a useful molecular imaging target for the detection and targeting of metastatic prostate cancer lesions, as reported in the November issue of The Journal of Nuclear Medicine. Using a novel radiotracer, researchers were able to effectively image STEAP1 (six-transmembrane epithelial antigen of prostate-1) in tumors and localize a large number of lesions.

Metastatic castration-resistant prostate cancer (mCRPC) is a significant health care problem, with more than 42,000 cases projected in 2020. "While significant strides have been made in detection of mCRPC with radiolabeled antibodies and small molecules that recognize prostate-specific membrane antigen (PSMA), other important potential targets, such as STEAP1, could be imaged to identify presence of mCRPC and possibly serve as therapeutic targets," said Jorge A. Carrasquillo, MD, who performed the study while an attending physician at Memorial Sloan Kettering Cancer Center in New York, New York. "89Zr-DFO-MSTP2109 represents a novel theranostic reagent to both identify the extent of metastatic prostate cancer and select patients for STEAP1-directed therapies."

Researchers also analyzed biopsies performed under other research protocols or for clinical indications either before or after imaging with 89Zr-DFO-MSTP2109A. High uptake values of 89Zr-DFO-MSTP2109A were noted in 11 of 12 bone sites biopsied and all five soft-tissue sites, each of which was confirmed as histologically positive. As researchers were unable to biopsy all cancerous lesions, a Bayesian approach was used to apply information gleaned from biopsied lesions to project the number of cancerous lesions in each patient. Use of this approach resulted in a best estimate of 86 percent of histologically positive lesions being true-positive on imaging with 89Zr-DFO-MSTP2109A.

"To our knowledge, this is the first study to report in detail on the imaging findings of targeting STEAP1," said Carrasquillo. "Given the high SUV in tumor and localization of a large number of lesions, this reagent warrants further exploration as a companion diagnostic in patients undergoing STEAP1-directed therapy."

He continued, "The difference we observed in targeting PSMA with various radiotracers in patients with prostate cancer may possibly reflect differences related to the biology of STEAP1-versus PSMA-positive prostate cancer. Furthermore, as radiolabeled anti-PSMA antibodies were superseded by small molecules for PSMA imaging, there is potential to develop small molecules to target STEAP1 as well."