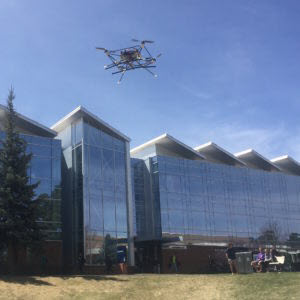 Northern Arizona University (NAU) researchers have been awarded a National Science Foundation grant to develop an unmanned aerial vehicle to find animals in the wild that are carrying tiny transmitting tags. The technology has potential to vastly improve the ability to track small wildlife.

Carol Chambers, a forestry professor and wildlife biologist, has spent years tracking bats. After a small radio transmitter is glued to a bat and it flies away, the researchers track the transmitter’s signal, often through rugged terrain.

“It could make our work more efficient because people won’t have to drive around for days searching for transmitters, often hiking long distances and up to the tops of hills and mountains to find bat roosts,” said Chambers, who primarily works to protect maternity bat roost habitats.

Related Article: Marine Lab Takes to the Air with Drones

“Better and faster is what we are shooting for,” said Michael Shafer, assistant professor of mechanical engineering, who is named on the NSF grant with Flikkema and Chambers.

“We will help these wildlife trackers do their jobs and improve information gathering. Instead of using hand or pole-mounted antennas, we will put an them on a UAV that can go up hundreds of feet and leverage the three-dimensional flight capabilities to more easily locate the radio tag signals,” Shafer said.

NAU’s drone technology capabilities for tracking wildlife will turn the UAV into a virtual pole that can fly hundreds of feet in the air and replace or augment handheld poles currently used to pick up radio tag signals. 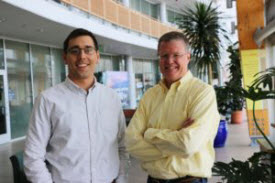 Michael Shafer and Paul Flikkema are working on an unmanned aerial radio tracking system for monitoring small wildlife species. The technology will be shared with scientists around the world.Photo courtesy of Northern Arizona UniversityWildlife biologists have an easier time studying larger animals because they use GPS-enabled tags. Those sensors are usually too heavy for bats, birds and other small animals, which need small, specialized radio-transmitting tags.

“We are developing a new UAV that is not available anywhere commercially,” said Flikkema. “We think the technology is a great synthesis of a mobile platform with sophisticated electronics and software that together can help find and track small animals.”

The NSF grant of $601,896 is applied to instrument development for biological research. Instead of funding new science, NSF is funding NAU’s new tool development with the goal of quick distribution to the scientific community.

Phases for the three-year NSF grant:

Year one: Developing the engineering and core technologies.

Year two: Testing technology and getting the documentation. At the end of the grant cycle, users will be able to download instructions to build their own UAVs.

Year three: Working with scientists at Cornell University to ensure individuals can effectively replicate and use the technology.