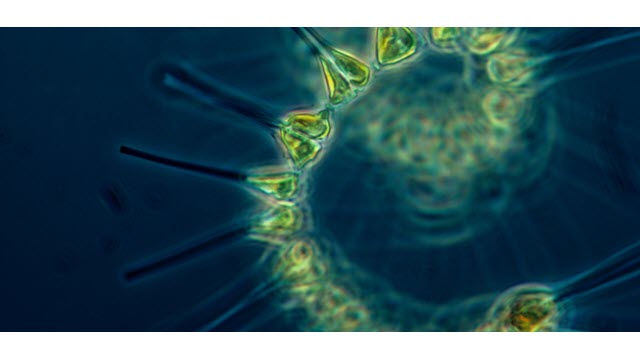 Phytoplankton are central to ocean food webs and carbon transport in the seaCredit: NOAA

Equipped with advanced underwater robotics and an array of analytical instrumentation, a team of scientists will set sail for the northeastern Pacific Ocean this August.

The researchers' mission for the National Aeronautics and Space Administration (NASA) and the National Science Foundation (NSF), which are supporting the project, is to study the life and death of microscopic plankton, tiny plant and animal organisms that play a critical role in removing carbon dioxide from the atmosphere and the oceans.

More than 100 scientists and crew members will embark from Seattle, Washington, for the Export Processes in the Ocean from Remote Sensing (EXPORTS) oceanographic campaign.

EXPORTS is the first coordinated multidisciplinary science project of its kind to study the fates and carbon cycle impacts of microscopic plankton. The project will use several underwater robotic platforms and two research vessels operated by the Scripps Institution of Oceanography, the R/V Revelle and R/V Sally Ride, which will sail 200 miles west into the open ocean.

Into the twilight zone

From these seaborne laboratories, researchers will explore plankton and the chemical and physical properties of the ocean from the surface to half a mile below. There lies the twilight zone, a region with little to no sunlight, where carbon from plankton can be sequestered, or kept out of the atmosphere, for decades to thousands of years.

EXPORTS scientists are investigating how much carbon moves through the ocean's sunlit upper layer and into the twilight zone, and how ocean ecological processes affect carbon fate and sequestration.

"By employing two ships, we'll be able to observe complex oceanographic processes that vary both in space and time—which we wouldn't be able to capture with a single ship," said Paula Bontempi, program manager for Ocean Biology and Biogeochemistry at NASA Headquarters.

Living in the ocean's surface waters are phytoplankton, tiny, plant-like organisms which, like land plants, use sunlight and carbon dioxide from the atmosphere to grow.

Phytoplankton play an important role in removing atmospheric carbon dioxide and producing oxygen. When phytoplankton, and the animal zooplankton that eat them, die, the remains sink and a fraction of the carbon in their bodies is exported to ocean depths.

While the major pathways of how carbon moves through the ocean are known, how much carbon is transferred along these pathways, and how much they depend on ecosystem characteristics, are less well-known.

"The carbon that humans are putting into the atmosphere is warming Earth," said Mike Sieracki, a Biological Oceanography program director in NSF's Division of Ocean Sciences. "Much of that carbon goes into the ocean and is transported to the deep sea, where it will not return to the atmosphere for a long time. This project will help us to understand the biological and chemical processes that remove that carbon, and to monitor these processes as climate changes."

The long-term removal of carbon from the atmosphere to ocean depths is known as the biological pump, which operates through three main processes.

First, carbon-laden particles from the ocean's surface sink through gravity, as happens with dead phytoplankton or zooplankton.

Second, in what's called vertical migration, zooplankton migrate daily to the ocean's surface to feed on phytoplankton, then return to the twilight zone at night, carrying carbon with them to deeper waters.

And third, physical oceanographic processes such as the global overturning circulation of the oceans and smaller-scale turbulent eddies carry suspended and dissolved carbon to the depths.

EXPORTS will provide data on the role of phytoplankton and zooplankton in the biological pump, and on the export of carbon to the deep sea. The information is important to plan observations and technologies for future Earth-observing satellite missions.

Among the many technologies in EXPORTS is an autonomous platform called a Wirewalker that uses wave energy to move instruments along a taut wire from the surface to 1,600 feet below the surface. The Wirewalker will measure temperature, salinity, oxygen, carbon and chlorophyll.

A 6.5-foot-long remote-controlled underwater vehicle called a Seaglider will gather similar measurements at depths of as much as 3,200 feet.

Aboard ship, samples will be collected for genomic analyses of phytoplankton, zooplankton and other organisms.

New, microscopic imaging tools will also be used, including a microscope called the Imaging FlowCytobot, which will provide real-time, high-resolution images of billions of individual phytoplankton. An Underwater Vision Profiler will measure the sizes of sinking particles and collect images of zooplankton.

Mounted on the ship's superstructure will be instruments that measure the ocean's color, from ultraviolet wavelengths to shortwave infrared bands of the electromagnetic spectrum.

Phytoplankton have distinct spectral "signatures" -- colors of light they absorb and scatter. By identifying these signatures, scientists will be able to develop algorithms for future satellite ocean color missions.

"What we learn from EXPORTS will give us a stronger understanding of how plankton species interact with their environment," said Bontempi. "Not only will we be able to use this information to develop new approaches to identifying and quantifying plankton by satellite, but we'll also be able to predict how much carbon will cycle back into the atmosphere and how much will be transported to the ocean depths over the long term."