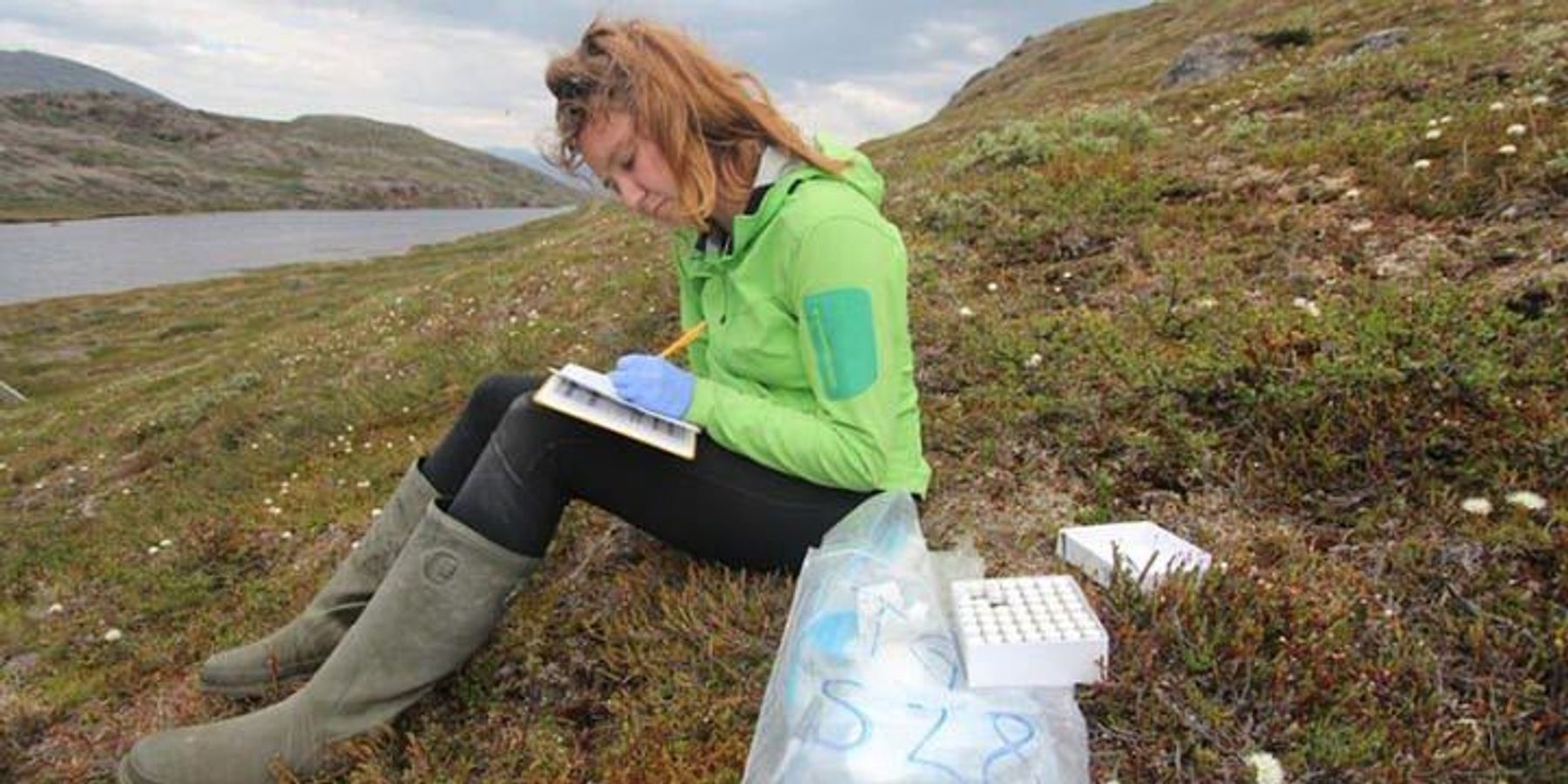 Allison Cluett, University at Buffalo geology PhD student, is first author of a study on summer temperatures in southern Greenland during past interglacials. She is pictured in Greenland, where she was working on a different study.
Elizabeth Thomas

BUFFALO, NY — Over hundreds of thousands of years, sediments from southern Greenland have been making their way into the ocean, where they're carried by underwater currents to a location in the Labrador Sea called the Eirik Drift.

Here, they settle on the ocean floor, where they form a record of history, accumulating in layers that document the environmental past of the lands from which they came.

A new University at Buffalo (UB) study uses these deposits to learn about ancient climate in southern Greenland, focusing on summer temperature during periods of relative warmth on Earth, called interglacials, over the past 600,000 years.

The scientists looked, specifically, at chemicals in leaf waxes. These compounds are among many materials found in the ocean-bottom mud, and for southern Greenland, the chemicals' make-up changes ever so slightly depending on how warm or cool the region is, says first author Allison Cluett, a PhD candidate in geology in the UB College of Arts and Sciences.

One conclusion of the research: Periods of prolonged warmth—where summers remain warm for many thousands of years—may be particularly disastrous for the Greenland Ice Sheet. The findings are a warning for today, says Elizabeth Thomas, PhD, UB assistant professor of geology, who conducted the study with Cluett.

"What we see is that sustained summer warmth is associated with dramatic ice sheet mass loss," Thomas says. "Today, we're releasing greenhouse gases, causing Earth's temperature to rapidly increase to levels last seen during these ancient warm periods. Climate models show that if we continue emitting greenhouse gases at the current rate, there could be long-lasting effects that will keep the Earth's temperature warm for thousands more years. We need to act now to dramatically reduce our emissions to minimize these potential, very long-term impacts."

The study was published on May 10 in the Proceedings of the National Academy of Sciences.

The research finds that summer temperatures in southern Greenland were elevated for about 20,000 years during a warm period that occurred roughly 400,000 years ago—a time when scientists believe the Greenland Ice Sheet shrank substantially.

"Strong ice sheet retreat and forest cover in southern Greenland occurred during a period of sustained warmth about 400,000 years ago," Cluett says. "Today, with global temperatures rising again, we could be on a similar trajectory if we don't make reductions to greenhouse gas emissions. Our research really points to the importance of the duration of warmth for the ice sheet."

While potential scenarios on a scale of thousands of years may seem like a long time, actions taken over a brief period can have intense effects that reverberate far into the future, affecting generation after generation, as Cluett and Thomas point out. 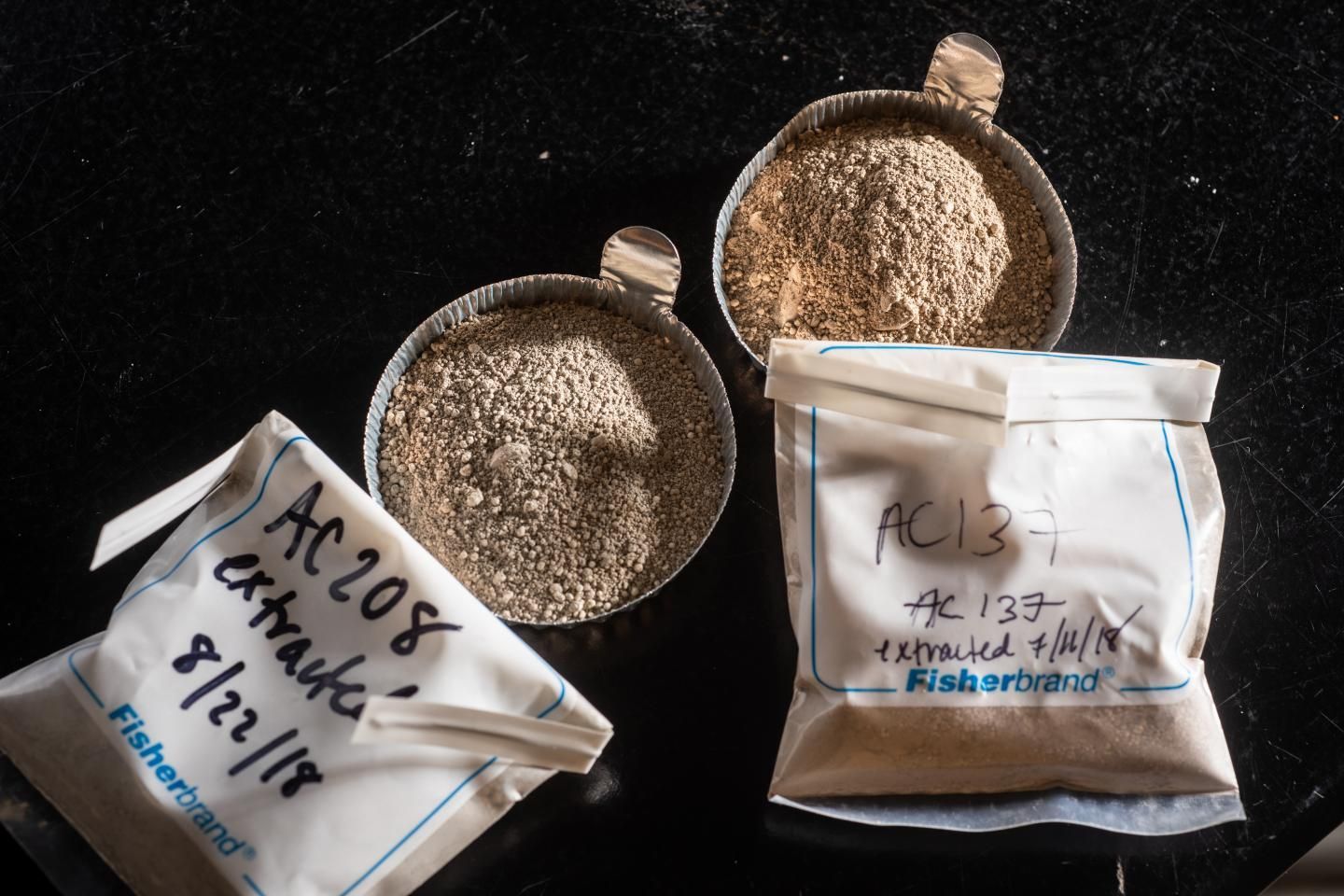 Ocean-bottom sediments, shown after materials such as leaf wax chemicals have been extracted. These sediments—collected in 1985 by the Ocean Drilling Program—were processed recently at UB as part of a study on summer temperatures in southern Greenland during past interglacials.
Douglas Levere / University at Buffalo

The study was supported by the National Science Foundation (NSF), including through an NSF Graduate Research Fellowship and an NSF-funded Schlanger Ocean Drilling Fellowship to Cluett, and an NSF Earth Sciences Instrumentation and Facilities grant to Thomas. The leaf wax chemicals that the scientists studied came from marine sediment collected in 1985 by the Ocean Drilling Program, from a spot on the Eirik Drift about 280 kilometers south of Greenland.

In addition to the warm periods 125,000 and 400,000 years ago, Cluett and Thomas also leveraged the sediment samples to reconstruct summer temperature trends for southern Greenland during four other interglacials.

"These are periods that are really difficult to study in the Arctic," Cluett says. "That's because as the ice sheets grow and wane, terrestrial records like lake sediments that could provide insight into environmental changes are often eroded away, so there's very little information about what the climate was like during these past times, which may be our best analogs for future warming."

The findings add to a trove of information that scientists are building up about the climate history of Greenland. For example, past studies have provided insight into topics such as ancient year-round temperatures at the summit of the ice sheet; the potential size of the Greenland Ice Sheet at various points in history; and the presence of spruce forests in southern Greenland during the exceptionally long warm period about 400,000 years ago (indicated by pollen found in the ocean mud). The new research adds to this picture.

Taken together, these historical insights could help scientists understand how the Greenland Ice Sheet may respond to modern climate change.

- This press release was originally published on the UB Graduate School of Education website. It has been edited for style