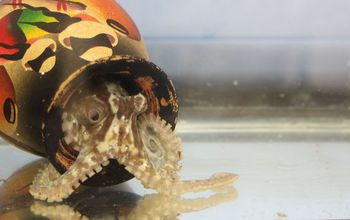 A young octopus emerges from her den.Photo Credit: Caroline Albertin and Abigail PointMultiple serpentine arms, a bulbous head, the ability to change color: No wonder the octopus is often compared to an alien creature.

Turns out, its uniqueness extends beyond those external characteristics. In the first-ever sequencing of the entire octopus genome, researchers discovered unusual features that shed light on octopus evolution and biology, and set the stage for future studies on complex nervous system development.

Published Aug. 12 in Nature, the research reveals striking differences between genome of the octopus and other invertebrates. Those include huge expansions in two families of genes previously thought to be unique to vertebrates, and a complex gene arrangement. The research was funded in part by the National Science Foundation (NSF).

The work was conducted by teams from the University of Chicago, University of California Berkeley and the Okinawa Institute of Science and Technology as part of the Cephalopod Sequencing Consortium.

The sequencing revealed some definite surprises in the octopus genome, said Clifton Ragsdale, principal investigator on the NSF award and an associate professor at the University of Chicago.

"But we expected to be surprised," he said. "These are such remarkable animals."

Ragsdale and his team sequenced the genome of Octopus bimaculoides, the California two-spot octopus. The researchers mapped gene expression profiles in 12 different tissues, and identified 33,000 protein-coding genes, which puts the octopus genome at slightly smaller in size than the human genome.

Octopuses, along with squids and cuttlefish, are cephalopods, a class of marine invertebrates with an evolutionary history spanning more than 500 million years. They have some of the most sophisticated behaviors in the animal kingdom: large, highly-developed brains capable of learning and problem-solving (like opening a food-filled jar, for example). They also have a suite of unique physical traits: the ability to regenerate complex limbs, camera-like eyes–which make them excellent hunters–and a sophisticated camouflage system.

Scientists have known about the special characteristics of octopuses for years, but this is the first time their potential origin has been traced to specific gene families, said James Deshler, a division director in NSF's Biological Sciences Directorate.

"This research is going to kick off new studies," Deshler said. "It serves as an example of how to apply modern molecular, cellular and genomic techniques to advance our understanding of the nervous system in general, and will enable others to adapt that knowledge to other aspects of brain-related research."

One of biggest surprises in the octopus genome was the expansion of two gene families, including the protocadherins, which regulate neuronal development. It was previously thought that only vertebrates possessed numerous and diverse protocadherins; they are crucial in setting up the wiring of the mammalian nervous system. The researchers found that protocadherins are 10 times more common in octopus genes than in mammals.

Yet besides these two dramatic expansions, octopus gene families are similar to other invertebrates. What's not similar is their arrangement. The octopus genome "looks like it's been in a Cuisinart," Ragsdale said. Different genes are placed in different genomic environments, which mean different regulatory elements affect the genes.

Ragsdale and his colleagues are now studying the molecular and genetic mechanisms responsible for octopus development.

"Once we pass into a post-genomic age, as we have for octopus, it opens a whole new range of questions, and new abilities to ask how the nervous system is organized, how it develops," he said.

"The approach of my lab is to start bringing modern molecular cellular neurobiology to questions about cephalopods," Ragsdale said. "We wouldn't have been able to do this without NSF support."

NSF has a broad portfolio of brain-related investments; cross-disciplinary research aimed at understanding the full complexity of the brain, in action and context. Learn more here.