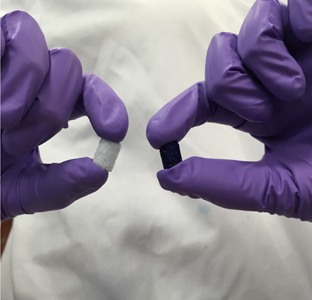 Pieces of the coated bone-mimicking foam biomedical engineering assistant professor Teja Guda has developed.Photo courtesy of UTSASay you fall and crack your head open, an ambulance takes you to the hospital and a group of doctors fill that hole in your skull with speaker foam? Well, soon that might be possible.

“It almost looks like a kitchen sponge,” Guda said. “The scaffold is 85 percent open space. The cells grow into it, and because we give them something solid to grow into, they start to regenerate tissue.”

Chemically, the scaffolding is made of the same ceramics that are found in bones.

“The idea is to mimic nature,” Guda said. “The body is what we want to duplicate, so why not literally duplicate the building blocks?”

The foam is, in fact, the same foam used in soundproofing and speakers, so it’s an actual building material being used to rebuild a part of the human body. It’s glazed in the same way ceramic pottery is glazed, except its ceramic putty has the same chemical makeup of human bones. It’s put into a furnace to harden the material.

“The big problem with glazed pottery is if you drop it, it cracks,” Guda said. “Now, in the fourth generation and thanks to a protein coating, the current generation of scaffolding is very much improved for performance, in that now it can chip but it won’t disintegrate.”

Scaffolding could replace bone grafts as a treatment, which is taking bone either from the patient’s body or from a cadaver. But cadaver bones have the risk of transmitting disease or not being compatible with the patient’s body.

“If the graft is taken from the patient’s body, the pain from that second injury is often more than the original injury,” said Guda. “There’s only so much you can scavenge from across the body. You don’t have a lot of spare bones lying around.”

Animal trials have been successful and the product is now undergoing further development abroad. Guda has also loaded drugs and antibiotics onto the scaffolding material so that doctors can skip that extra step while treating a patient.

High-Tech Metals Germanium and Gallium from the Deep Sea?

High-Tech Metals Germanium and Gallium from the Deep Sea?