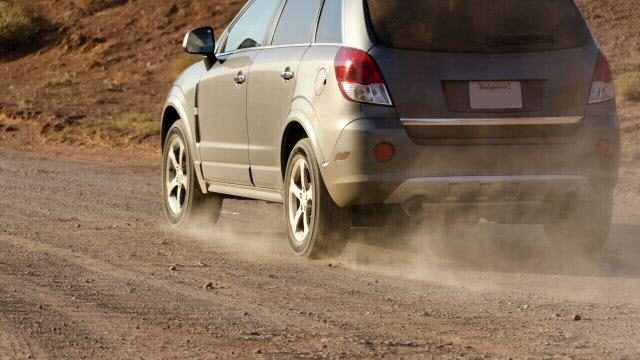 A truck kicking up dust as it speeds down a dirt road is a typical image in country music videos. But this dust from unpaved roads is also an environmental and health hazard. To prevent dust clouds, some states treat dirt motorways with oil and gas wastewater. Now, one group reports in Environmental Science & Technology that this wastewater contains harmful pollutants that have the potential to do more harm than good.

According to the U.S. Department of Transportation, 34 percent of roads in the U.S. are unpaved. These unpaved roads contribute to almost half of the annual airborne particulate matter emissions—such as dust, dirt and soot—in the U.S., potentially causing respiratory and cardiovascular issues. In an attempt to prevent these health effects, road managers spread products on these roadways to suppress dust. Almost 200 different dust suppressants, mostly chloride salts or salt brine products that form a coating or help particles aggregate, are available. But these suppressants can be too costly in regions where budgets are tight, so many municipalities turn to a free alternative: salty oil and gas (O&G) wastewater produced from well operations. While O&G wastewater is good for a township’s bottom line, there are concerns about contaminants leaching from it into the environment.

So William D. Burgos and colleagues wanted to evaluate the potential environmental and human health impacts of this practice.

The spreading of O&G wastewater on roads is permitted in at least 13 U.S. states, with significant spreading activity occurring in Ohio and Pennsylvania. The team studied O&G wastewater spread on roads and found them to contain salt, radioactivity and organic contaminant concentrations above their respective drinking water standards. These substances can be harmful to humans and aquatic life. In lab simulations, nearly all of the metals from these wastewaters leached out after simulated rain events, but metals such as radium—which is radioactive and a known carcinogen—and lead were partially retained on roadways. The researchers speculate that the radium that did leach could end up in nearby bodies of water. The group proposes that establishing wastewater standards and treatment guidelines for O&G wastewaters spread on roads could help reduce the potential environmental impacts of this practice.

The authors acknowledge funding from the United States Geological Survey.