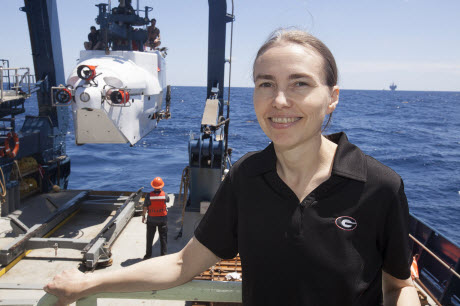 Samantha Joye, a professor of marine sciences in the Franklin College of Arts and Sciences, studies the oil plumes generated by the 2010 Deepwater Horizon blowout.Photo courtesy of University of GeorgiaAthens, GA. - The use of chemical dispersants meant to stimulate microbial crude oil degradation can in some cases inhibit the microorganisms that naturally degrade hydrocarbons, according to a new study led by University of Georgia marine scientists. Their findings are based on laboratory-simulated conditions that mimic Gulf of Mexico deep waters immediately following the Deepwater Horizon oil spill.

The study, published in the Proceedings of the National Academy of Sciences, examined microbial oil degradation in the Deepwater plume, simulating oil concentrations and dispersants concentrations observed during the incident. The team found that the presence of dispersants significantly altered the microbial composition of Gulf deep water by promoting the growth of Colwellia, a group of microorganisms capable of dispersant degradation.

However, when oil alone was added to parallel samples in the absence of chemical dispersants, the growth of natural hydrocarbon-degrading Marinobacter was stimulated.

"These compelling results show the naturally occurring communities of oil-degrading microorganisms, especially Marinobacter, are quite proficient at degrading oil and that oil biodegradation was more efficient in the absence of chemical dispersants," said the study's lead author Samantha Joye, Georgia Athletic Association Professor of Arts and Sciences.

"During the spill, Marinobacter were not abundant in deep-water plume samples, possibly as a consequence of dispersant applications," said study co-author Sara Kleindienst, junior group leader at the University of Tübingen in Germany. "Whether natural hydrocarbon degraders were outcompeted by dispersant degraders or whether they were directly affected by dispersant-derived compounds needs to be resolved in future studies."

Widely used in emergency responses to oil spills in marine environments as a means of stimulating microbial degradation of oil, chemical dispersants were applied in an unprecedented volume to the sea surface and deep waters of the Gulf of Mexico after the 2010 spill. As a "first line of defense," 7 million liters (about 1.8 million gallons) of chemical dispersants were applied to increase the use and breakdown of oil compounds by microorganisms.

The uncontrolled oil well blowout released more than 750 million liters of oil into the Gulf.

"Our results showed preferential degradation and enrichment of distinct organic compounds when dispersant is used to chemically break up oil," said study co-author Patricia Medeiros, an assistant professor of marine sciences at UGA. "In the future, it will be important to further study these compounds and possibly include them when tracking the fate of oil-dispersant mixtures in the environment."

"The fact that dispersants drove distinct microbial community shifts that impacted oil degradation efficiently came as a big surprise," Joye said. "It is critical to quantify the factors that influence the efficiency of oil biodegradation in the environment, and that includes dispersants."

This research was supported by the Ecosystem Impact of Oil and Gas Inputs to the Gulf (ECOGIG) research consortium, which is funded by the Gulf of Mexico Research Initiative.

"This research was made possible through the interdisciplinary collaborative network that a program like ECOGIG creates," Joye said. "This team effort allowed us to make critical progress toward identifying and understanding how dispersants impact microbial hydrocarbon degradation in the oceans, including the potential role of dispersants in facilitating the formation and sedimentation of microbially derived ‘marine oil snow.'"