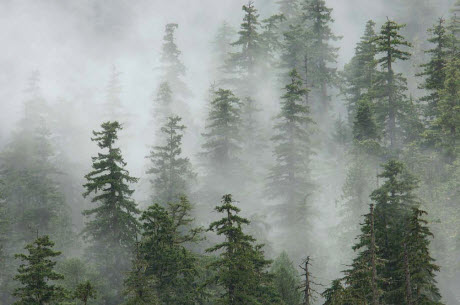 Old-growth forest in the Oregon Cascades.Photo credit: Matt BettsCORVALLIS, Ore. – The soaring canopy and dense understory of an old-growth forest could provide a buffer for plants and animals in a warming world, according to a study from Oregon State University published Apr. 22 in Science Advances.

Comparing temperature regimes under the canopy in old-growth and plantation forests in the Oregon Cascades, researchers found that the characteristics of old growth reduce maximum spring and summer air temperatures as much as 2.5 degrees Celsius (4.5 degrees Fahrenheit), compared to those recorded in younger second-growth forests.

Landowners who include biodiversity as a management goal, the scientists said, could advance their aims by fostering stands with closed canopies, high biomass and complex understory vegetation.

Management practices that create these types of “microclimates” for birds, amphibians, insects, and even large mammals could promote conservation for temperature-sensitive species, the authors wrote, if temperatures rise as a result of global warming.

“Though it is well-known that closed-canopy forests tend to be cooler than open areas, little is known about more subtle temperature differences between mature forest types,” said Sarah Frey, postdoctoral scholar in the OSU College of Forestry and lead author on the study. “We found that the subtle but important gradient in structure from forest plantations to old growth can have a marked effect on temperatures in these forests.”

Temperature is also strongly affected by elevation and even small changes in topography, but the way forests are managed was a critical factor in explaining temperature differences. Researchers at Oregon State and Pacific Northwest Research Station of the U.S. Forest Service conducted the study at the H.J. Andrews Experimental Forest east of Eugene. 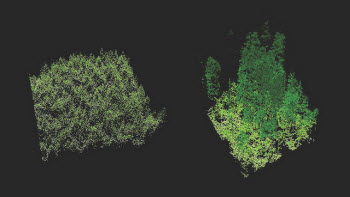 Points of laser light reveal the differences in structure in plantation (left) and old-growth forests, as shown by LiDAR.Image credit: Sarah FreyFrey and her colleagues collected temperature data in 2012 and 2013 at 183 locations, just over one third of which were in plantations. The team also analyzed data on forest structure collected through LiDAR, an aerial mapping technique that uses lasers to detect very small-scale (less than six feet) structural differences in forests.

“To our knowledge, ours is the first broad-scale test of whether subtle changes in forest structure due to differing management practices influence forest temperature regimes,” they wrote.

“To the untrained eye, plantations might look similar to old-growth forest in terms of the aspects that are well known to influence temperature, particularly canopy cover,” said Matt Betts, Oregon State professor and co-author. “So, the magnitude of the cooling effect of old-growth structure is somewhat surprising.”

The researchers found that variations in the landscape, such as elevation and slope, helped to explain temperature differences over short distances of 100 feet or less. However, at broader scales, the characteristics of the forest itself exerted a significant influence.