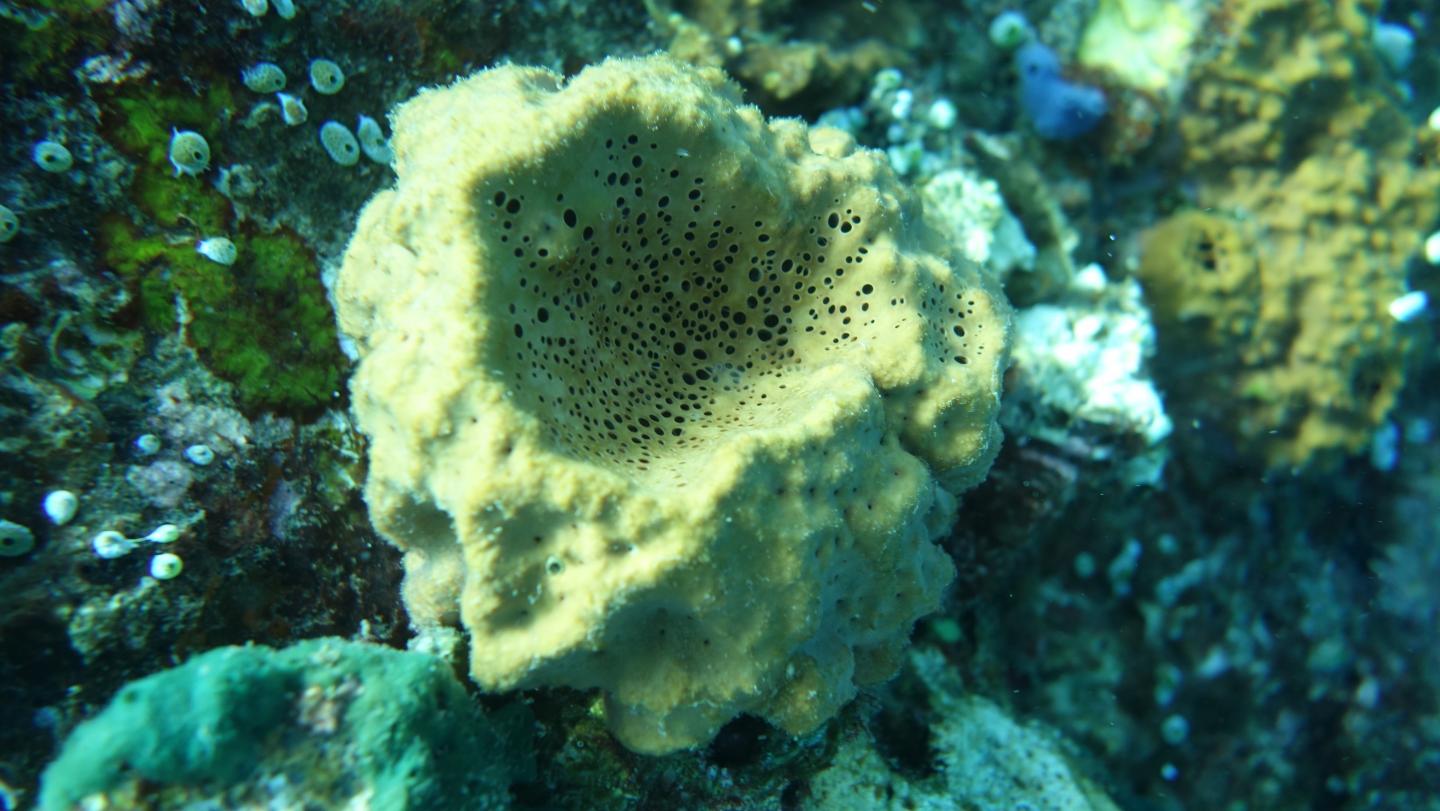 An underwater picture of the modern demosponge species Rhabdastrella globostellata, which make the same 26-mes steroids that the researchers found in ancient rocks.Paco Cárdenas

Researchers at the University of California, Riverside, have found the oldest clue yet of animal life, dating back at least 100 million years before the famous Cambrian explosion of animal fossils.

The study, led by Gordon Love, a professor in UCR's Department of Earth Sciences, was published today in Nature Ecology & Evolution. The first author is Alex Zumberge, a doctoral student working in Love's research group.

Rather than searching for conventional body fossils, the researchers have been tracking molecular signs of animal life, called biomarkers, as far back as 660-635 million years ago during the Neoproterozoic Era. In ancient rocks and oils from Oman, Siberia, and India, they found a steroid compound produced only by sponges, which are among the earliest forms of animal life.

"Molecular fossils are important for tracking early animals since the first sponges were probably very small, did not contain a skeleton, and did not leave a well-preserved or easily recognizable body fossil record," Zumberge said. "We have been looking for distinctive and stable biomarkers that indicate the existence of sponges and other early animals, rather than single-celled organisms that dominated the earth for billions of years before the dawn of complex, multicellular life."

The biomarker they identified, a steroid compound named 26-methylstigmastane (26-mes), has a unique structure that is currently only known to be synthesized by certain species of modern sponges called demosponges.

"This steroid biomarker is the first evidence that demosponges, and hence multicellular animals, were thriving in ancient seas at least as far back as 635 million years ago," Zumberge said.

The work builds from a 2009 study by Love's team, which reported the first compelling biomarker evidence for Neoproterozoic animals from a different steroid biomarker, called 24-isopropylcholestane (24-ipc), from rocks in South Oman. However, the 24-ipc biomarker evidence proved controversial since 24-ipc steroids are not exclusively made by demosponges and can be found in a few modern algae. The finding of the additional and novel 26-mes ancient biomarker, which is unique to demosponges, adds extra confidence that both compounds are fossil biomolecules produced by demosponges on an ancient seafloor.

"The combined Neoproterozoic demosponge sterane record, showing 24-ipc and 26-mes steranes co-occurring in ancient rocks, is unlikely attributed to an isolated branch or extinct stem-group of demosponges," Love said. "Rather, the ability to make such unconventional steroids likely arose deep within the demosponge phylogenetic tree but now encompasses a wide coverage of modern demosponge groups."