SALT LAKE CITY—Eye cancer took the life of author and neurologist Oliver Sacks last year, bringing attention to the rare and deadly disease. Scientists have tried to develop precision treatments against cancers like this one, but the mutations that cause them have proven difficult to block with drugs.

Now, a team led by scientists at Huntsman Cancer Institute at the University of Utah, University of Utah School of Medicine, and Navigen, Inc., report a new treatment that shows promise against the hard-to-treat cancer. They found that the mutation relies on a protein, ARF6, to promote cancer. A drug made against this alternative target inhibits eye tumors in mice. 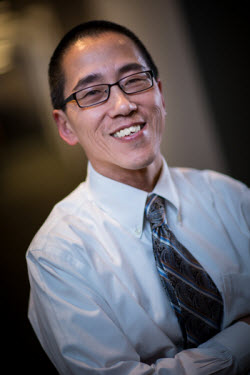 Dean Li, MD, PhDPhoto courtesy of the Huntsman Cancer Institute at the University of Utah“We completely bypass the mutations in Gaq oncogenes that have been so hard to target, and have found a different strategy to slow the disease,” says Dean Li, MD, PhD, Huntsman Cancer Institute investigator and H.A. and Edna Benning Endowed Professor of Internal Medicine at the Eccles Institute of Human Genetics. He and Kirill Ostanin, PhD, senior director at Navigen, Inc., were senior authors on the study.

A new understanding of how eye cancer works led to the unexpected finding. Ordinarily ARF6 works to transmit molecular signals within healthy cells. Here, the scientists report that a mutation that causes eye cancer hijacks ARF6, redirecting it to transmit signals to cancer promoting pathways. Blocking ARF6 with the drug inhibits dissemination of the cancer message.

“In eye cancer, ARF6 is like a traffic cop at a major intersection that directs the traffic of cancer signals down different roads to destruction. The drug forces ARF6 to hold back traffic,” says Li. “We think this same treatment strategy could also work against other cancers.” These include skin, breast, brain, renal, and additional cancers in which ARF6 is known to play a role in the disease. Li and Ostanin are now leading studies to further optimize and test the drug. Further, Li is investigating whether the general strategy, inhibiting proteins that distribute cancer signals, could be applied to other cancers.

The findings bring new insights to treating eye cancer, a disease that has largely flown under the radar because it is so rare, with fewer than 3,000 cases diagnosed in the U.S. each year. Sacks succumbed to the most common type of eye cancer, uveal melanoma, which is related to the skin cancer, cutaneous melanoma. Three years ago, Li’s team found that ARF6 regulated late stages of skin cancer progression, leading them to test whether it does the same in eye cancer.

The new study reveals that ARF6 does much more, acting a lot like the causative mutation that sets eye cancer into motion. Addition of either the mutated cancer-causing protein, or of a version of ARF6 that is always turned on, triggers molecular pathways known to drive cancer (Rho/Rac, PLC/PKC, YAP pathways, and beta-catenin pathway, newly identified in this study).

“A lot of work has focused on trying to develop drugs that target the oncogene,” says Jae Hyuk Yoo, PhD, a postdoctoral fellow in internal medicine. Yoo co-led the study with colleagues Dallas Shi, PhD, and Allie Grossman MD, PhD, assistant professor of pathology. “By changing our thinking a little bit, we realized that we might be able to accomplish the same goal by targeting ARF6 instead.”

Though the idea sounded like a good one, the scientists didn’t know whether ARF6 would be as hard to “drug” as the mutated protein. In collaboration with Navigen, Inc., they developed a compound that not only inhibited ARF6 activity in cells, but also blocked eye tumors in mice. Mouse models for eye cancer ordinarily develop large tumors in the eye. The drug prevented tumors from forming in six of the eleven animals that were treated. Tumors that did arise were on average significantly smaller than those in untreated mice.

“This study is a milestone in uncovering the fundamental roles of ARF6 GTPase in cancer, and establishing a new drug discovery avenue in the cancer field,” says Ostanin.

As Ostanin’s and LI’s teams were collecting their final results, Sacks passed away. Just a few months prior, he wrote in The New York Times that he was handing life’s baton, with all of its troubles and tribulations, to the next generation. “I feel the future is in good hands,” he said.

“ARF6 is an actionable node that orchestrates oncogenic GNAQ signaling in uveal melanoma” was published in Cancer Cell on June 2, 2016.