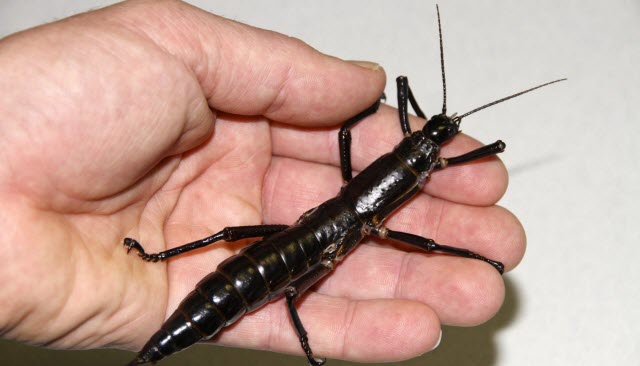 Lord Howe Island stick insects were once numerous on the tiny crescent-shaped island off the coast of Australia for which they are named. The insects, which can measure up to six inches in length, don't resemble sticks so much as tree lobsters, as they are also known. After ships accidentally introduced rats to the island about a century ago, the Lord Howe Island stick insects quickly disappeared. They were later declared extinct, only to be found again decades later living on Ball's Pyramid, a sheer volcanic stack about 12 miles away. But those newfound insects didn't look quite the same as older museum specimens, raising doubts about the nature of their true identity.

"We found what everyone hoped to find--that despite some significant morphological differences, these are indeed the same species," says Alexander Mikheyev at the Okinawa Institute of Science and Technology in Japan. 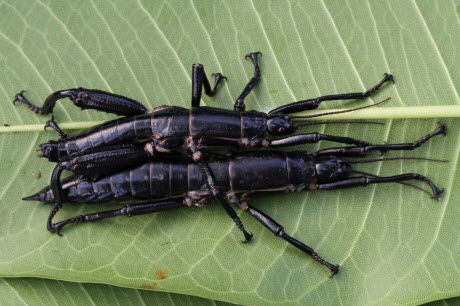 A Dryococelus australis pair on ficus.Photo credit: Rohan Cleave, Melbourne Zoo, AustraliaUsing DNA sequence data from the Ball's Pyramid population, the researchers assembled a draft genome of the captive bred insects along with their complete mitochondrial genome. The effort revealed a massive genome, which appears to have been duplicated more than once to contain six copies of each chromosome.

The researchers also re-sequenced mitochondrial genomes from historic museum specimens collected on Lord Howe Island before the extinction event. Comparisons between living and dead insects found a divergence of less than one percent—well within the range of differences expected within a species. The findings suggest that the rediscovered populations are indeed Lord Howe Island stick insects. Dryococelus australis really has evaded extinction so far.

The work highlights the importance of museum collections for taxonomic validation in the context of ongoing conservation efforts, the researchers say. The findings come just as the Lord Howe Island community has backed a plan to drop poisoned grain on the island in hopes of eradicating the rats. If successful, the next chapter of the Lord Howe Island stick insect's story will take place on its ancestral island.

"The Lord Howe Island stick insect has become emblematic of the fragility of island ecosystems," Mikheyev says. "Unlike most stories involving extinction, this one gives us a unique second chance."