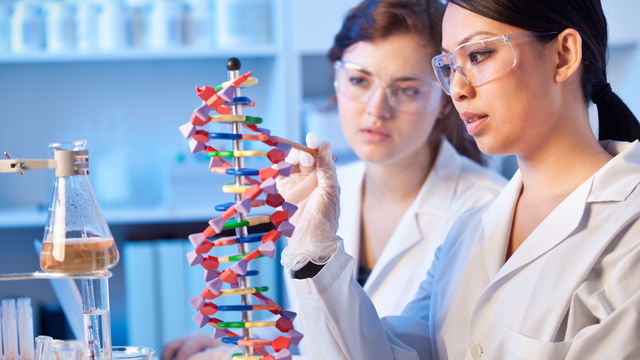 Many women in doctoral degree programs in fields like engineering and physics are in a class of their own—and that’s not a good thing.

A new study found that the fewer females who enter a doctoral program at the same time, the less likely any one of them will graduate within six years.

In the worst-case scenario—where there’s just one woman in a new class—she is 12 percentage points less likely to graduate within six years than her male classmates, the study found.

However, for each additional 10 percent of women in a new class, that gender gap in on-time graduation rates closes by more than 2 percentage points.

The findings suggest that the “female-friendliness” of doctoral programs may play a key role in the gender gap in STEM (Science, Technology, Engineering and Mathematics) fields.

“It has been nearly impossible to quantify the climate for women in male-dominated STEM fields,” said Valerie Bostwick, co-author of the study and a post-doctoral researcher in economics at The Ohio State University.

“But our data gave us a unique opportunity to try to measure what it is like for women in STEM. What we found suggests that if there are few or no other women in your incoming class, it can make it more difficult to complete your degree.”

Bostwick conducted the research with Bruce Weinberg, professor of economics at Ohio State. Their results will be published Monday, Sept. 17 on the website of the National Bureau of Economic Research.

They used a new data set that previously had not been available to researchers. They linked transcript records from all public universities in Ohio to data from the UMETRICS project, which provides information on students supported by federal research grants.

A key advantage of this data is that it shows when and if students drop out—something that most data sets on graduate students don’t show.

“Most datasets are based on students who graduate—they don’t see you if you don’t get your degree,” Bostwick said. “That makes it impossible to find out why students drop out.”

This study examined all 2,541 students who enrolled in 33 graduate programs at six Ohio public universities between 2005 and 2016.

Overall, the average incoming class of doctoral programs included about 17 students and was about 38 percent female. But there was wide variation in class sizes and the percentage of female students.

In typically male programs, the average number of women who joined a class in any particular year was less than five.

The study shows the importance for women of having a support system of other women in their entering class, Weinberg said.

A woman joining a class that was more male than typical for her doctoral program was about seven percent less likely to graduate within six years than were her male peers.

“But if there were more women than average in the program, that graduation gap goes away,” Weinberg said.

Findings showed that when women dropped out of male-dominated programs, they usually did it in the first year. Women who joined a doctoral class with no other females were 10 percentage points more likely to drop out in that first year.

The researchers looked at two potential reasons why women may be dropping out: research funding and grades.

If female students were less likely to obtain research funding than their male peers, that could be an important reason why they’re failing to finish. But the study found no real differences in funding for men and women.

Results did show that women had slightly lower grades than men when they were in male-dominated classes. Women who joined a class with no other females had first-term GPAs that were 0.11 grade points lower than their male peers.

“That’s not enough to make a big difference,” Bostwick said. “We estimate that grades could not explain more than a quarter of the difference between the number of women and men who graduate within six years.”

Bostwick said that if grades or research funding are not the main reason for why women are not completing their STEM degrees, that suggests the reason must be something that can’t be directly measured: the academic climate for women.

“We can only speculate about what it is in the climate that is making it more difficult for women,” Bostwick said.

“It may be hard to feel like you belong when you don’t see other women around you. There may be subtle discrimination. We don’t know. But it highlights the fact that women need support, particularly if they are the only ones entering a doctoral class. They need to know about resources that could help them, particularly in that first key year.”