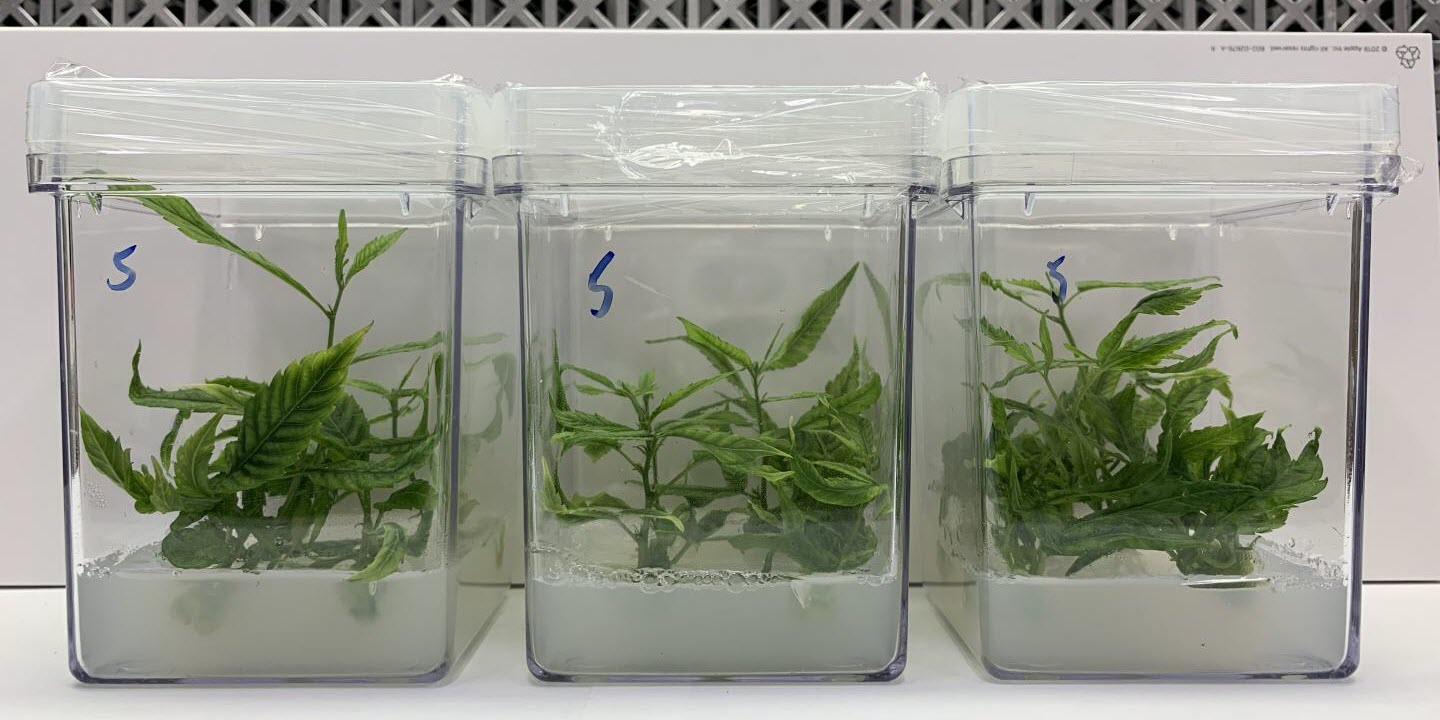 As nurseries and garden centers fill up with spring landscaping plants, home gardeners owe a lot to a technique called micropropagation, which has proven beneficial to many plants—perhaps soon to include cannabis, thanks to work by University of Connecticut (UConn) researchers in the College of Agriculture, Health, and Natural Resources.

Micropropagation is a technique used for growing large quantities of new plants from fewer "parent" plants, yielding clones with the same, predictable qualities. The cannabis (Cannabis sativa) industry, however, has been largely left out of this beneficial technique, because this species of plant is extremely difficult to micropropagate.

Researchers from UConn—including associate professor Jessica Lubell-Brand, PhD student Lauren Kurtz, and professor Mark Brand, in the Department of Plant Science and Landscape Architecture—have worked through some of the challenges of cannabis micropropagation of hemp. Their method was recently published in HortTechnology.

Currently, the commercial cannabis industry relies on other propagation techniques, such as collecting seeds or taking carefully timed cuttings from stock "mother" plants. These methods require a lot of space and maintenance, since multiple specimens of each line of stock plants must be kept in the event of disease outbreak or plant death.

"Micropropagation produces many more clones than other methods. Since it is not relying on seed, the clones are uniform, and they will perform similarly to the parent plant. Plants that come out of tissue culture also have the benefit of being disease-free, they frequently show enhanced vigor, and you can grow a lot more in less space," says Lubell-Brand.

Plants in tissue culture depend on the grower to assume the role of nature to provide the right balance of nutrients and growth hormones in the culture media, to regulate temperature and light—everything. For some plants, micropropagation is easy to accomplish, where explants placed in the growing medium will multiply readily. For others, like cannabis, the process requires quite a bit of refining to ensure the production of a large number of healthy plants.

"Cannabis does not really want to be in tissue culture. This research is a lot of trying to figure out, What more does the plant need?" says Lubell-Brand.

Realizing the potential to help meet the needs of the rapidly growing medical cannabis industry, the researchers set out to answer this question and decipher the needs of cannabis in tissue culture. The process requires a lot of trial and error, Lubell-Brand explains.

"We start the culture using shoot tips from greenhouse-grown plants. Then we subculture those and if we suspect something is lacking, for instance, that the plant isn't getting what it needs in the media, we experiment with nutrients like calcium, magnesium, phosphorus, and nitrogen to try to increase the length of time that they grow in culture."

Lubell-Brand says one of the issues with hemp micropropagation is hyperhydricity of the shoots: when the shoots get saturated with water, they become brittle, and they don't grow well.

Lubell-Brand explains that by adjusting the media for the first six weeks in culture while also using vented vessels to increase air flow, they were able to avoid hyperhydricity.

In the medical cannabis industry, consistency and reliability in crops is highly sought after, and micropropagation could deliver both. For growers to get started with the micropropagation technique, some equipment is needed, such as an autoclave and a laminar flow bench to ensure a sterile environment. However, for operations already using tissue culture techniques, the equipment is the same, says Lubell-Brand.

Kurtz says the research has been met with some excitement: "Tissue culture is not that well worked-out for cannabis in the literature. People are aware of the complications, problems, and downfalls, so people have been pretty receptive to the paper."

Lubell-Brand says the research is continuing, with Kurtz planning further studies to refine the process, such as determining the optimal timing of rooting and the length of time shoots can remain in culture.

The cultivars the researchers are working with are cannabidol (CBD) cultivars lacking psychoactive amounts of tetrahydrocannabinol (THC), but their micropropagation technique can be applied to THC-dominant cultivars as well. One day, maybe not so far in the future, the majority of cannabis may be micropropagated using tissue culture, though Lubell-Brand says there are still improvements to be made.

"Despite all our efforts, it's still not easy to grow cannabis in tissue culture. However, now we can multiply shoots, root shoots, and transition them from the lab to the greenhouse, which is a step forward."

- This press release was originally published on UConn Today. It has been edited for style

Automated Fingerprint Analysis Is One Step Closer to Reality

Automated Fingerprint Analysis Is One Step Closer to Reality