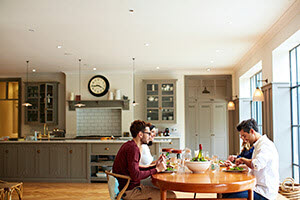 Each time college students in the study got up to get more food, they ended up eating an average of 170 more calories in the “open” than in the “closed” floor plan kitchen.Photo courtesy of the University of Notre DameNo competent food critic reviews a restaurant without taking into consideration the ambience of the place, because whether or not a meal is enjoyable greatly depends upon the environment in which it is served.

According to Kim Rollings, assistant professor in the University of Notre Dame’s School of Architecture, dining environments can have even more serious consequences for eating behaviors, and in an article published recently in the journal Environment and Behavior she and Nancy Wells, an environmental psychologist from Cornell University, describe some of them.

The article, “Effects of Floor Plan Openness on Eating Behaviors,” concerns a study Rollings and Wells conducted with 57 college students in the Food and Brand Lab at Cornell.

The study made use of folding screens to manipulate the arrangement of kitchen and dining areas during the service of buffet-style meals, and two-way mirrors for the unobtrusive observation of variously sized groups of student diners.

“Although more research is needed,” Rollings said, “the results of our study suggest that the openness of a floor plan, among many other factors, can affect how much we eat. Eating in an ‘open concept kitchen,’ with greater visibility and convenience of food access, can set off a chain reaction. We’re more likely to get up and head toward the food more often, serve more food and eat more food.” 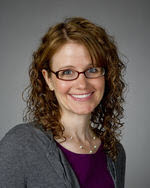 Kim RollingsPhoto courtesy of the University of Notre DameRollings noticed that each time college students in the study got up to get more food, they ended up eating an average of 170 more calories in the “open” than in the “closed” floor plan kitchen. “Considering that decreasing calorie consumption by 50 to 100 calories per day can reduce or avoid the average annual weight gain of one to two pounds among U.S. adults,” she said, “these results have important implications for designers of and consumers in residential kitchens; college, workplace and school cafeterias and dining areas; and buffet-style restaurants.”

Not so long ago, most American kitchens were separate, enclosed spaces, purely functional and not intended for entertaining. “Now,” Rollings said, “open-concept plans put kitchens on display, which is great for entertaining, but not necessarily for our waistlines. Serving food out of sight from diners in an open kitchen, serving food from a counter in a closed kitchen rather than from a dining table, and creating open kitchens that have the ability to be enclosed may help U.S. adults maintain their weight.”

Rollings said that the study findings have important implications not only for college and university students, but also for people who need to eat in health care, group home and military settings.