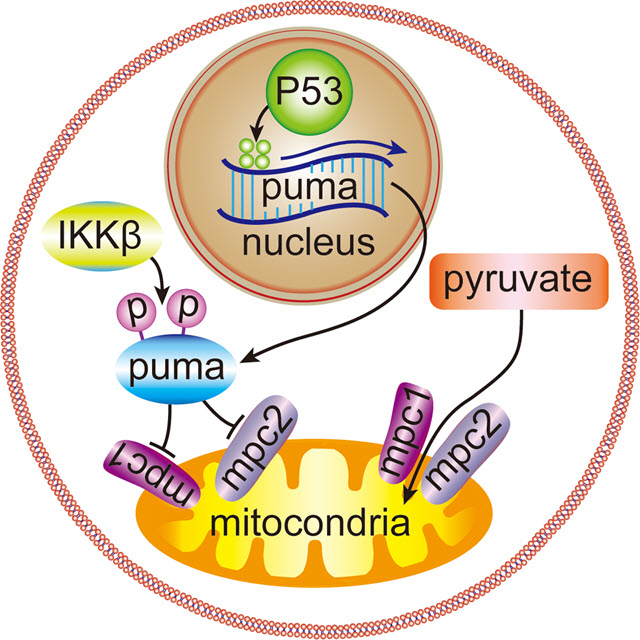 Search for a description of “p53” and it becomes clear that this human protein is widely known for its cancer-fighting benefits, leading to its renown as “the guardian of the genome.”

Scientists at the University of California San Diego have published a new study challenging that description.

Studying the “wild type” version of p53 (WTp53), the form that exists broadly in nature, Jinchul Kim, Lili Yu, Xuemei Fu, Yang Xu, and their colleagues found evidence that in certain cases, WTp53 instead plays a role in promoting tumors, rather than suppressing them. This finding explains an established paradox that, whereas p53 is mutated in more than 50 percent of all human cancers, it is not frequently mutated in certain human cancers, such as liver cancer.

In the January 31 issue of Cancer Cell, the scientists describe the culmination of more than four years of research on liver cancer that shows that WTp53 stimulates tumor growth by enhancing cancer metabolism. The key, according to the researchers, is a protein known as PUMA (the acronym for “p53 upregulated modulator of apoptosis”), which works inside mitochondria, the energy hub of cells. The researchers found that, at appropriate levels, PUMA disrupts normal function of mitochondria and causes a switch from oxidative phosphorylation, a process for efficient energy production in cells, to glycolysis, an alternative energy path that helps boost cancer metabolism.

“The widely accepted idea is that p53 suppresses cancer, but in our study we would argue against that,” said Xu, a professor in the Division of Biological Sciences’ Section of Molecular Biology. “In some cancers it would have the opposite effect by promoting cancer.”

Xu indicates that p53 indeed halts the initiation of tumors by reducing the oxidative phosphorylation that produces genome toxins. However, once tumors are established, p53 may function to enhance tumor progression.

“It’s actually the same function but playing exactly the opposite role in two different contexts,” said Xu of the research findings, which were based on a mix of data from cell samples, mouse models and human patients.

Xu says the research provides a warning for cancer drug discovery. Drug therapies designed to enhance p53’s function in cancer patients may be inadvertently causing an opposite effect.

“This role of WTp53 can resolve several long-lasting paradoxes in p53 biology and will be instrumental in the development of cancer therapy, especially in the context of the highly pursued strategies to eliminate human cancer by either activating WTp53 or restoring WTp53 function to p53 mutants in cancers,” the authors note in the paper.