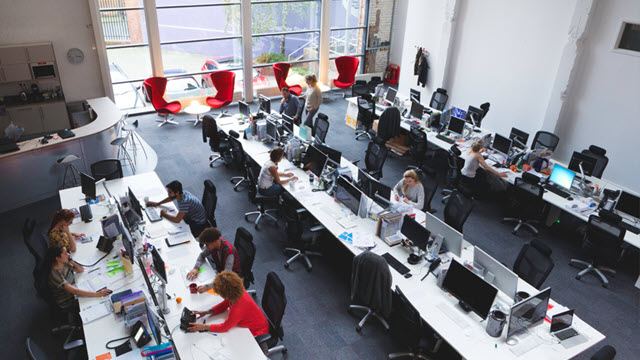 Companies that hope to avoid long-term stagnation can jolt employees into creative thinking by forcing them to sit alongside unfamiliar co-workers in open work spaces, according to new research from the Tepper School of Business at Carnegie Mellon University.

Sunkee Lee, assistant professor of Organizational Theory and Strategy, found in his study published in Organization Science that reconfiguring work areas to force people to sit closer to co-workers with whom they did not previously sit close to naturally encouraged interactions, which helped employees develop new product ideas that benefited the company.

When people are forced to interact with unfamiliar colleagues, “you have more chances to learn things useful for developing new business ideas,” Lee says.

He tested his theory in a South Korean e-commerce firm that changed the seating arrangements of 60 sales employees. Those who sat near new colleagues engaged in more “exploration,” which describes behaviors such as risk-taking and experimentation. These employees also performed better financially than the control group, individuals who did not experience much change in their seating arrangements.

Lee also noted that the employees who seemed to learn the most from their new neighbors were those who had higher levels of experience in the organization and those who did not have existing social ties with such neighbors. Those who had higher levels of experience were better at learning new knowledge and applying it to their own tasks, and new interactions with unfamiliar colleagues prompted more learning.

According to Lee, exploration differs from “exploitation,” behaviors such as refinement, efficiency, and execution. Although exploration is vital to company growth, organizations often struggle to adequately promote its development because people are naturally inclined to gravitate toward the comfort zone of exploitation, which involves taking less risk.

In the short term, exploitation is beneficial because it generates immediate returns. But companies that rely too heavily on perfecting a product or service can fail to adapt to changes in the business environment, leaving them vulnerable to being overtaken by competitors in the long term, Lee points out.

“Companies have to always prepare for the next ‘big thing,’” he says. “The problem is that many ideas never even make it to the market, and that failure is an essential part of exploration.”

Interestingly, Lee also found that financial performance improved for individuals who were exploring more, even in the short run. This finding contradicts existing literature which suggests that exploration generally ends in failure, and thus financial performance will go down in the short term. He believes that the financial uptick was due to the knowledge individuals learned from their new colleagues before engaging in exploration. The new colleagues most likely provided insights into how to source and develop new ideas, along with advice on how to avoid mistakes based on their own experiences.

He also noted that the new seating arrangement helped employees improve their performance in selling their existing products (i.e., exploitation), most likely because the interactions with new neighbors also helped them generate new marketing strategies, pricing methods, and product promotions for their existing products.

“They’re even getting better at what they were already good at,” he says. “That was a counterintuitive finding for me.”

He did note that open work spaces do have some drawbacks: there are privacy issues, illness spreads faster, and people experience more distractions. Therefore, in a company where productivity is more important than innovation, such as an accounting firm, an open work space actually could be detrimental, Lee said.

He also cautioned against creating a hybrid environment with quiet silo areas where employees could go for more privacy.

“It may satisfy people more, but there could be selection into those areas, with shy people gravitating toward the quiet spaces,” he says. “And that would remove the learning opportunities for introverts and those who could otherwise interact with such people.”