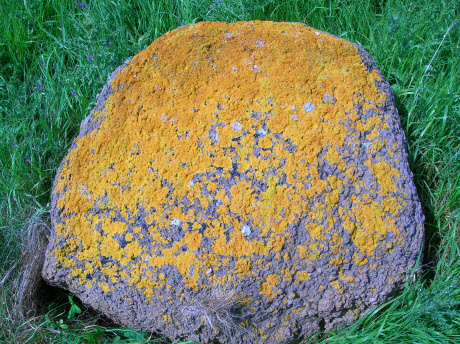 Parietin, shown to have anticancer activity in the laboratory, is a dominant pigment in Caloplaca lichens.Photo credit: Rosser1954, Wikimedia CommonsAn orange pigment, found in lichens and rhubarb, called parietin may have potential as an anti-cancer drug, scientists at Winship Cancer Institute of Emory University have discovered.

The results were published in Nature Cell Biology on October 19.

Parietin, also known as physcion, could slow the growth of and kill human leukemia cells obtained directly from patients, without obvious toxicity to human blood cells, the authors report. The pigment could also inhibit the growth of human cancer cell lines, derived from lung and head and neck tumors, when grafted into mice.

A team of researchers led by Jing Chen, PhD, discovered the properties of parietin because they were looking for inhibitors for the metabolic enzyme 6PGD (6-phosphogluconate dehydrogenase). 6PGD is part of the pentose phosphate pathway, which supplies cellular building blocks for rapid growth. Researchers have already found 6PGD enzyme activity increased in several types of cancer cells.

"This is part of the Warburg effect, the distortion of cancer cells’ metabolism," says Chen, professor of hematology and medical oncology at Emory University School of Medicine and Winship Cancer Institute. "We found that 6PGD is an important metabolic branch point in several types of cancer cells."

The Winship team obtained cancer cells from a patient with acute lymphoblastic leukemia, and found doses of physcion/parietin that could kill half the leukemia cells in culture within 48 hours, while the same doses left healthy blood cells unscathed. A more potent derivative of the pigment called S3 could cut the growth of a lung cancer cell line by a factor of three over 11 days, when the cells were implanted into mice.

Although 6PGD inhibitors appear to be nontoxic to healthy cells, more toxicology studies are needed, both to assess potential side effects and to see whether people with inherited conditions would be more sensitive to the drugs. Parietin is present in some natural food pigments, but has not been tested as a drug in humans.