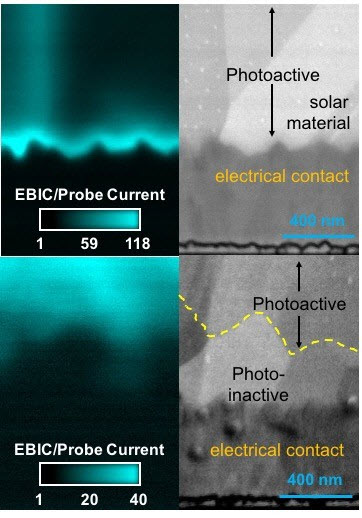 The entire solar material for the sample with less than or equal to 30 percent selenium is photoactive (top) while the bottom of the solar material for the image below contains greater than 35 percent selenium and has reduced photoactivity.Image Courtesy of: ORNL(Oak Ridge, TN) Aug. 3, 2016—Solar cells based on cadmium and tellurium could move closer to theoretical levels of efficiency because of some sleuthing by researchers at the Department of Energy’s Oak Ridge National Laboratory.

A team led by Jonathan Poplawsky of the Center for Nanophase Materials Sciences used advanced microscopy techniques to discover efficiency differences of crystalline structures of various mixtures of cadmium, tellurium and selenium. In fact, selenium is an integral part of the formulation that resulted in a world record for solar cell efficiency. The team’s paper is published in Nature Communications.

While some of today’s solar cells use a blend of cadmium and tellurium to convert light into electricity, adding the optimum amount of selenium in the right places could help increase efficiency from the current mark of about 22 percent to levels approaching the theoretical limit of 30-33 percent. The trick is to determine the best ratio of selenium.

“Using different microscopy methods, we were able to gain a better understanding of the phases, compositions and crystalline structures that allow these materials to convert light into electricity more efficiently,” said Poplawsky, adding that the availability of data is limited. “In some instances, adding too much selenium changes the crystalline structure of cadmium-tellurium and dramatically reduces the conversion efficiency.”

To make their determination, researchers used a combination of analytical techniques, including atom probe tomography, transmission electron microscopy and electron beam induced current. These are capabilities within the CNMS, a DOE Office of Science User Facility.

“We have shown that the amount of selenium incorporated into the cadmium-tellurium controls whether the small crystals inside the solar cell form as crystal structure A or crystal structure B,” Poplawsky said. “This information can be used as a roadmap for solar cell producers to make improved cadmium-tellurium solar cells that use selenium additions, and hopefully increase the overall efficiency.”
Poplawsky noted that solar panels typically use silicon as the material for converting sunlight into electricity. Cadmium-telluride, however, has an advantage over silicon because it can absorb the same amount of sunlight with 98 percent less semiconducting material, thus reducing the overall cost of the solar panel. This also makes solar panels composed of cadmium, tellurium and selenium more competitive with other forms of electricity generation.

This research was funded by DOE’s SunShot Initiative in collaboration with the National Sciences Foundation.

UT-Battelle manages ORNL for the DOE's Office of Science. The Office of Science is the single largest supporter of basic research in the physical sciences in the United States, and is working to address some of the most pressing challenges of our time. For more information, please visit http://science.energy.gov/.

About the SunShot Initiative

The SunShot Initiative is a collaborative national effort that aggressively drives innovation to make solar energy fully cost-competitive with traditional energy sources before the end of the decade. Through SunShot, the Energy Department supports efforts by private companies, universities, and national laboratories to drive down the cost of solar electricity to $0.06 per kilowatt-hour. Learn more at energy.gov/sunshot.