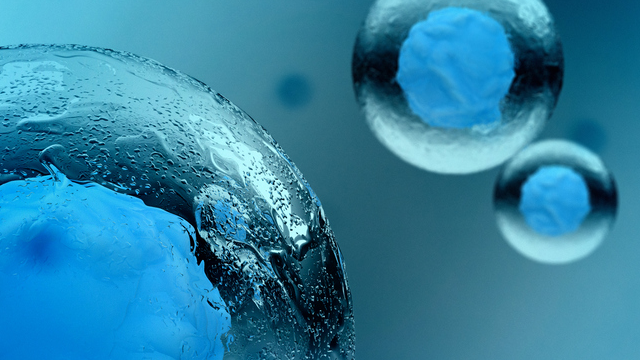 LA JOLLA, CA—Scientists at The Scripps Research Institute (TSRI) have found a new approach to the “reprogramming” of ordinary adult cells into stem cells.

In a study published Sept. 11 in an Advance Online paper in Nature Biotechnology, the TSRI scientists screened a library of 100 million antibodies and found several that can help reprogram mature skin-like cells into stem cells known as induced pluripotent stem cells (IPSCs).

“This result suggests that ultimately we might be able to make IPSCs without putting anything in the cell nucleus, which potentially means that these stem cells will have fewer mutations and overall better properties,” said study senior author Kristin Baldwin, associate professor in TSRI’s department of neuroscience.

IPSCs can be made from patients’ own cells, and have a multitude of potential uses in personalized cell therapies and organ regeneration. However, none of IPSCs’ envisioned clinical uses has yet been realized, in part because of the risks involved in making them.

One problem with this procedure is that the viral insertion events or overproduction of the nuclear reprogramming factors may damage cell DNA in a way that turns the cell cancerous. Another is that this nuclear reprogramming typically yields a collection of IPSCs with variable properties. “This variability can be a problem even when we’re using IPSCs in the laboratory for studying diseases,” Baldwin said.

In contrast, during ordinary animal development, cell identity is altered by molecular signals that come in from outside the cell and induce changes in gene activity, without any risky insertions of DNA. To find natural pathways like these—through which ordinary cells could be turned into IPSCs—Baldwin and her laboratory teamed up with the TSRI laboratory of Richard Lerner, the Lita Annenberg Hazen Professor of Immunochemistry. Lerner has helped pioneer the development and screening of large libraries of human antibodies for finding new antibody-based drugs and scientific probes.

In this case, the team, including graduate student Joel W. Blanchard and postdoctoral research associate Jia Xie, who were lead authors, set up a library of about 100 million distinct antibodies and used it to find any that could substitute for OSKM transcription factors.

In an initial set of experiments, the researchers tried to identify antibodies that can replace both Sox2 and c-Myc. They established a large population of mouse fibroblast cells—often used to make IPSCs in experiments—and inserted the genes for the other two transcription factors, Oct4 and Klf4. Next they added their huge library of antibody genes to the population of cells, such that each cell ended up containing the genes for one or more of the antibodies.

The scientists could then observe which of the cells began forming stem cell colonies—indicating that one of the antibodies produced by those cells had successfully replaced the functions of Sox2 and c-Myc and triggered the switch in cell identity. Sequencing the DNA of these cells allowed the researchers to determine the antibodies responsible.

In this initial study, the scientists were unable to find antibodies that replace the function of the fourth OSKM transcription factor, Klf4. However, Baldwin expects that with more extensive screening she and her colleagues eventually will find antibody substitutes for Klf4 as well. “That one I think is going to take us a few more years to figure out,” she said.

The antibody-screening approach in principle allows scientists not only to find antibodies that can replace OSKM transcription factors, but also to study the natural signaling pathways through which these antibodies work.

In a proof of this principle, the scientists found that one of the Sox2-replacing antibodies binds to a protein on the cell membrane called Basp1. This binding event blocks Basp1’s normal activity and thus removes the restraints on WT1, a transcription factor protein that works in the cell nucleus. WT1, unleashed, then alters the activity of multiple genes, ultimately including Sox2’s, to promote the stem cell state using a different order of events than when using the original reprogramming factors.

WT1 (Wilms tumor 1) is overproduced in some cancers and is considered an oncogene. That fact highlights an added value of such studies: to help scientists understand the relationship between cancer cell development and the stem cell state.

Other co-authors of the paper, “Replacing reprogramming factors with antibodies selected from combinatorial antibody libraries,” were Nadja El-Mecharrafie, Simon Gross, and Sohyon Lee.