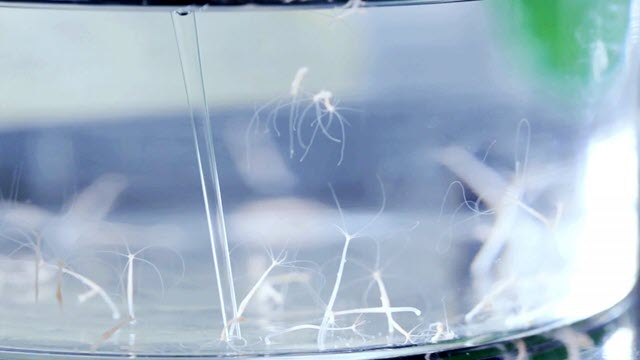 The fresh water polyp Hydra as a model system shows possible links between overfed microbes and the development of diseaseCREDIT: Kiel Life Science

Since the end of the World War II, along with the growing prosperity and the associated changes in lifestyle, numerous new and civilization-related disease patterns have developed in today's industrialized nations.

Examples of the so-called "environmental diseases" are different bowel inflammations like Crohn's disease or ulcerative colitis. Common causes include disruptions to the human microbiome, i.e. the natural microbial colonization of the body, and in particular of the intestine. To date, scientists have explained this disrupted cooperation between host body and microbes with different hypotheses: for example, they postulated that excessive hygiene, the intensive use of antibiotics, or certain genetic factors permanently disrupt the microbiome, thus making people vulnerable to illnesses.

However, these explanation attempts have so far been incomplete. A team from the Collaborative Research Centre (CRC) 1182 "Origin and Function of Metaorganisms" at Kiel University (CAU) has now formulated a new and more comprehensive ecological-evolutionary theory on the development of environmental diseases. The Kiel researchers suggest that an unnatural and particularly comprehensive nutrient supply decouples bacteria from their host organisms, and thus destroys the delicate balance of the microbiome. The (to some extent) over-fed bacteria in the gut thus promote disease development. The Kiel scientists published this fundamental new approach toward a more complete explanation of environmental diseases  in the journal mBio.

The origin lies in the oceans

The starting point for the Kiel research team was the ecology of marine habitats: research on coral and algae dying off, and the associated effects on important ecosystems in the oceans, suggests that in addition to other factors such as climate change or overfishing, the nutrient conditions in the seawater may be the cause of the problem. As soon as there is an oversupply of food due to human influences, bacteria living in a community with corals begin to decouple from their hosts. They then no longer feed off the metabolic products of the host, but prefer the richer nutrient supply of the surrounding waters. The balance of the coral microbiome is disrupted because of the exodus of its symbiotic partner, and diseases occur as a result.

"In this connection between nutrient availability and the balance of bacteria-host relationships, we see a universal principle which goes way beyond the very specific example of corals," explained Dr. Tim Lachnit, research associate at the CRC 1182 and first author of the study. "In studies of our model organism, the freshwater polyp Hydra, we were able to experimentally confirm this connection," continued Lachnit. These small cnidarians also showed clear signs of disease as soon as their normal nutrient uptake was disturbed and an over-supply of food was available instead.

What do corals and cnidarians have to do with people?

With a high degree of probability, the knowledge gained in the experiment can also be transferred to human health. Similar to in seawater, or in the simple body cavity of a freshwater polyp, which during the course of evolution has decoupled from its external environment and a direct food supply, the nutrient supply in the human gut is also changing along with the civilization-induced changes in eating habits—toward an unbalanced, energy-rich and low-fiber diet. In addition to direct negative health consequences, a permanently high, easy-to-process supply of nutrients not only affects the human metabolism it feeds, but also the bacterial colonization of the intestine, which is also "fed." The microbes switch from the metabolites of the host as their staple food to the abundantly available nutrients from the human food and thus decouple from their interactions with the host organism.

"This over-feeding of the bacteria promotes their growth as a whole, and certain species of bacteria proliferate to the detriment of other members of the microbiome in an increased and uncontrolled manner," emphasized professor Thomas Bosch, spokesperson of the CRC 1182. "Thus, along with the change in the composition of the bacterial colonisation, the interactions between bacteria and host organism also change, and a serious maladaptation—known as dysbiosis—occurs," explained Dr. Peter Deines, research associate at the Kiel metaorganism CRC.

Other civilization-related factors increase this imbalance of the microbiome. The elimination of periodic fasting resulting from food sources not always being available, the only very rare occurrence of diarrhea leading to episodic reductions of the intestinal bacterial colonizers and the diet-related impoverishment of the microbial diversity in the gut are just a few examples. The first two of these represent very fundamental mechanisms, which since the early development of mankind right up to the pre-industrial era enabled the microbiome to return to a normal state at regular intervals, and thus regain a healthy and natural composition.

Does the microbiome heal itself?

The "over-feeding hypothesis" proposed by the researchers offers valuable approaches for further research, right through to potential transfer to future treatments: to date, scientists were particularly looking for ways to correct a disturbed microbiome through external interventions such as probiotics, i.e. the addition of certain types of helpful bacteria, or even fecal transplants to restore the balance.

Now, the ecological-evolutionary perspective has added another dimension. More than ever before, it incorporates the natural ability of the microbiome to readjust itself, and to restore a healthy composition. Therefore, future research approaches lie in the specific mechanisms that balance the microbiome, and the question of whether the "overfeeding" of the bacteria can be reduced by changed eating habits. "An interesting question will be whether the original evolutionary processes which ensure the balance of the microbiome also have therapeutic potential," said Lachnit. "In the future we will, for example, not only consider the known health benefits of fasting, but also its effects on the composition and function of the microbiome, and thus on the development of inflammatory diseases," continued Lachnit.