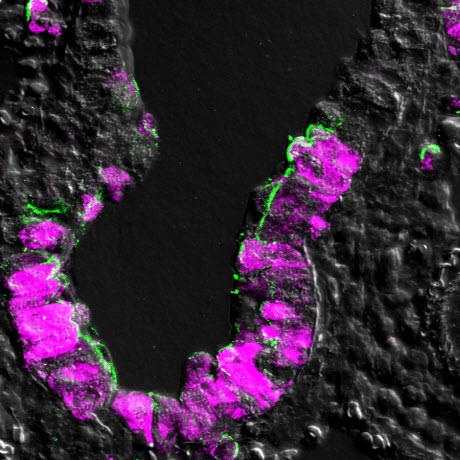 Mouse lung epithelial cells infected with influenza are marked by the expression of NS1 (magenta). These cells augment expression of the Hedgehog target gene, Patched-1 (green).Photo courtesy of the University of California San DiegoTwo recent studies led by biologists at the University of California San Diego have set the research groundwork for new avenues to treat influenza and anthrax poisoning.

Published a month apart in PLOS Pathogens, the studies from Professor Ethan Bier’s laboratory used a series of experiments to identify key pathways and mechanisms previously unknown or overlooked in the body’s defenses.

The first study used fruit flies as an in vivo test system to reveal new evidence about the function of a key influenza protein called NS1, which has evolved to target molecular pathways in the host. Research led by Margery Smelkinson found that NS1 modulates the activitiy of a signaling cascade known as the Hedgehog pathway (so named because fruit fly larvae lacking the Hedgehog gene emerge hairless and resemble tiny hedgehogs).

“Margery’s experiments showed that the NS1 protein can alter expression of Hedgehog target genes on its own, without other viral proteins,” said Bier, professor and newly named holder of the Tata Chancellor’s Endowed Professorship in Cell and Developmental Biology. “The clinical implications of this work are that we might be able use existing drugs that alter Hedgehog signaling to treat influenza infection,” said Bier.

“It is remarkable that a defect caused by the influenza NS1 protein in Drosophila led to the discovery of a new role for the NS1 protein in influenza virus-induced pathogenesis,” said study coauthor Robert Krug of the University of Texas at Austin. “Margery and Ethan never gave up and eventually overcame the skepticism expressed by other scientists.” 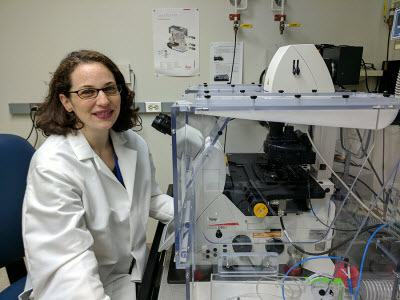 Margery SmelkinsonPhoto courtesy of the University of California San DiegoThe UC San Diego researchers set up collaborations to achieve their findings, including: Krug at the University of Texas at Austin, who generated the influenza virus mutant encoding the mutant NS1 protein; and John Teijaro and Michael Oldstone at the Scripps Research Institute, who carried out mammalian pathogenesis studies with the wild-type and mutant influenza virus.

“Another important finding from this study is that we uncovered a mutant form of NS1 that accelerated lethality in flu-infected mice which was linked to stronger activation of Hedgehog signaling,” said Smelkinson. “This suggests that reducing Hedgehog signaling during the course of the infection may reduce severity of symptoms. Some Hedgehog signaling reducing agents are currently on the market to treat specific types of cancers while others are in clinical trials. It would be interesting to see if any of these drugs would also be efficacious in treating the flu.”

The second study (cover of the latest issue of PLOS Pathogens) describes new findings by Annabel Guichard and her colleagues that could open the door to much needed intervention for treating late-stage anthrax infection.

Anthrax poisonings, as well as cholera infections, work in part by disrupting the normal transport mechanisms of proteins. The researchers analyzed the processes by which proteins that normally bind cells together are blocked by an anthrax toxin named edema factor (EF). This mechanism halts the delivery of the “glue” for key cell sheets—blood vessels for anthrax and intestinal lining for cholera—which results in blood loss-induced shock (anthrax) and acute diarrhea (cholera). 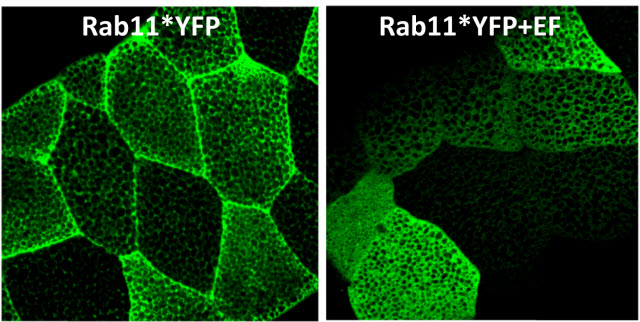 “This study started with experiments in fruit flies, which helped us to identify new molecular pathways affected by these toxins,” said Guichard. “It is striking to see how many pathological processes are conserved all the way from insects to humans.”

Guichard and her colleagues further identified several molecular inhibitors critical to mediating these effects and tested them in mice with positive results.

“In principle, one could save people suffering from cutaneous late-stage anthrax infections and maybe treat a variety of other similar diseases,” said Bier. “These two studies highlight the value of using an integrated multi-systems approach—including fruit flies, mice, and human cells—to discover mechanisms underlying disease processes.”