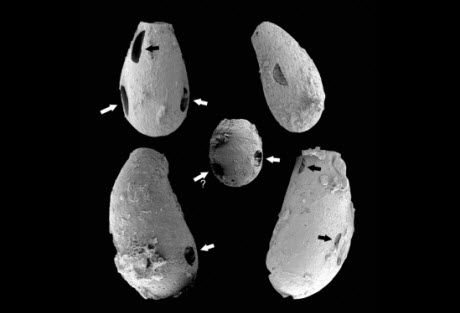 Half-moon shaped holes (black arrows) and circular holes (white arrows) in 780–740 million-year-old fossils of shell-forming amoebae from the Chuar Group of the Grand Canyon, Arizona. Holes are approximately 15 to 35 micrometers in size: shells are 75 to 150 micrometers in length.Photo Credit: Susannah PorterVampires are real, and they’ve been around for millions of years. At least, the amoebae variety has. So suggests new research from University of California Santa Barbara paleobiologist Susannah Porter.

Using a scanning electron microscope to examine minute fossils, Porter found perfectly circular drill holes that may have been formed by an ancient relation of Vampyrellidae amoebae. These single-celled creatures perforate the walls of their prey and reach inside to consume its cell contents. Porter’s findings appear in the Proceedings of the Royal Society B.

“To my knowledge these holes are the earliest direct evidence of predation on eukaryotes,” said Porter, an associate professor in UCSB’s Department of Earth Science. Eukaryotes are organisms whose cells contain a nucleus and other organelles such as mitochondria. 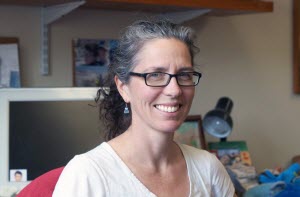 Susannah PorterPhoto Credit: Sonia Fernandez“We have a great record of predation on animals going back 550 million years,” she continued, “starting with the very first mineralized shells, which show evidence of drillholes. We had nothing like that for early life—for the time before animals appear. These holes potentially provide a way of looking at predator-prey interactions in very deep time in ancient microbial ecosystems.”

Porter examined fossils from the Chuar Group in the Grand Canyon—once an ancient seabed—that are between 782 and 742 million years old. The holes are about one micrometer (one thousandth of a millimeter) in diameter and occur in seven of the species she identified. The holes are not common in any single one species; in fact, they appear in not more than ten percent of the specimens.

“I also found evidence of specificity in hole sizes, so different species show different characteristic hole sizes, which is consistent with what we know about modern vampire amoebae and their food preferences,” Porter said. “Different species of amoebae make differently sized holes. The Vampyrellid amoebae make a great modern analog, but because vampirelike feeding behavior is known in a number of different unrelated amoebae, it makes it difficult to pin down exactly who the predator was.”

According to Porter, this evidence may help to address the question of whether predation was one of the driving factors in the diversification of eukaryotes that took place about 800 million years ago.

“If that is true, then if we look at older fossil assemblages—say 1 to 1.6 billion years old—the fossilized eukaryote will show no evidence of predation,” Porter said. “I’m interested in finding out when drilling first appears in the fossil record and whether its intensity changes through time.” 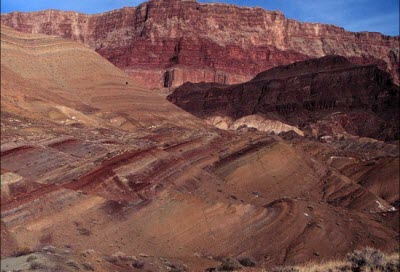 The Chuar Group in the Grand Canyon was once an ancient seabed. Photo Credit: Carol DehlerPorter also is interested in seeing whether oxygen played a role in predation levels through time. She noted that the microfossils those organisms attacked were probably phytoplankton living in oxygenated surface waters, but like vampyrellid amoebae today, the predators may have lived in the sediments. She suggests that those phytoplankton made tough-walled cysts—resting structures now preserved as fossils—that sank to the bottom where they were attacked by the amoebae.

“We have evidence that the bottom waters in the Chuar Group in that Grand Canyon basin were relatively deep—200 meters deep at most—and sometimes became anoxic, meaning they lacked oxygen,” Porter explained.

Relayed Article: More Ancient Viruses Lurk in Our DNA than We Thought

“I’m interested to know whether the predators only were present and making these drill holes when the bottom waters contained oxygen,” Porter added. “That might tie the diversification of eukaryotes and the appearance of predators to evidence for increasing oxygen levels around 800 million years ago.

“We know from the modern vampire amoebae that at least some of them make resting cysts themselves,” Porter said. “A former student of mine joked we should call these coffins. So one of our motivations is to see if we can find these coffins in the fossil assemblage as well. That’s the next project.”