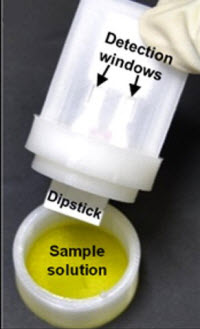 A new, simple test could help detect pathogens in food and prevent illnesses.Image credit: American Chemical Society Food poisoning is a stomach-churning, miserable condition that sends thousands of Americans to hospital emergency rooms every year. Now scientists report in the American Chemical Society's journal Analytical Chemistry a simple, paper-based test that could help detect pathogens hitchhiking on food before they reach store shelves, restaurants and, most importantly, our stomachs.

According to one estimate by the U.S. Department of Agriculture, the foodborne bacteria Salmonella alone led to nearly 20,000 hospitalizations and almost 400 deaths in 2013. Economists estimate that the treatment of all these patients and the related productivity losses cost more than $3 billion annually. And those numbers account for just one of the 15 pathogens responsible for most of the food poisoning cases. Current testing for pathogens in food requires complicated machinery and trained personnel. But these tests don't provide the simple results needed in large-scale food manufacturing. So Je-Kyun Park and colleagues set out to find a more practical way to detect foodborne pathogens.

The researchers developed a paper-based test that can handle the multistep reactions necessary for this kind of analysis by controlling the pore size of the paper. When dipped into solutions containing the E. coli strain O157:H7, Salmonella typhimurium or both, lines appeared on the dipstick indicating a positive result within 15 minutes. Because the method requires dipping the device into a solution once and produces an easy-to-read result, it could be performed by workers without special training, the researchers say.

The authors acknowledge funding from the Rural Development Administration of Korea and the National Research Foundation of Korea.