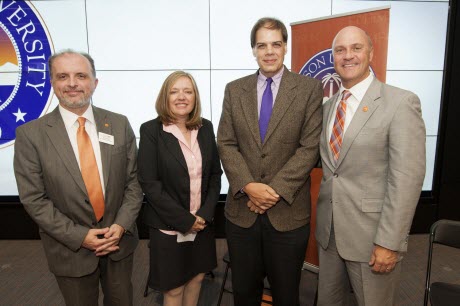 Tanju Karanfil, vice president of Research; Lesly Temesvari and Kerry Smith, co-principal investigators of the COBRE grant, and President James P. Clements.Photo courtesy of Clemson UniversityCLEMSON, SOUTH CAROLINA — An interdisciplinary team of Clemson University researchers focused on fighting organisms responsible for infectious diseases that threaten the health of billions of people globally has been awarded $10.5 million from the National Institutes of Health (NIH).

The Centers of Biomedical Research Excellence (COBRE) grant will enable Clemson’s Eukaryotic Pathogens Innovation Center (EPIC) to develop a critical mass of scientists and research infrastructure that could accelerate the rate of discovery in the fight against pathogens that cause some of the world’s most devastating and intractable infectious diseases, including amoebic dysentery, African sleeping sickness, and fungal meningitis.

This is Clemson’s second COBRE award and the first to the university outright. In 2009, a $9 million grant helped establish the South Carolina Bioengineering Center of Regeneration and Formation of Tissue (SC BioCRAFT), a collaboration with the Medical University of South Carolina. In 2014, SC BioCRAFT received a follow-up grant from the COBRE for $11 million.

The new grant was announced during Wednesday’s Clemson University Research Symposium at the Watt Family Innovation Center on campus.

“This grant is a force multiplier for advancing research by positioning our junior faculty and young investigators to compete for complimentary funding and by enhancing collaboration between other programs at Clemson,” said biological sciences professor and EPIC co-founder Lesly Temesvari.

The grant will provide funds for five junior faculty, four research technicians, 11 PhD graduate students and administrative personnel. A portion of the grant will be used to create a network of external mentors to provide guidance and expertise to junior scientists. The funds will also help support efforts in Clemson’s Light Imaging Facility and Institute of Translational Genomics.

“The mentors’ ultimate goal is to shepherd junior researchers to a point of independence where they can secure their own funding and make even greater contributions to the science of fighting these diseases,” said Kerry Smith, EPIC director and professor of genetics and biochemistry. 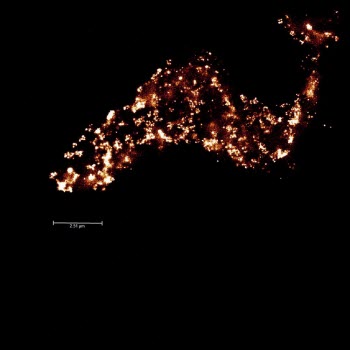 The COBRE grant will also help support efforts in Clemson’s Light Imaging Facility and Institute of Translational Genomics.Image courtesy of Clemson University“It’s very clear that as global economies develop, travel becomes easier and the climate changes, these diseases that were once constricted to tropical and subtropical areas will start coming to the United States,” he said.

“The grant is, in part, a testament to our researchers’ being physically located together where we could show the power and creativity of collaboration,” she said.

EPIC researchers currently collaborate with professors in Clemson’s departments of chemistry, physics and astronomy, and genetics and biochemistry to understand parasite motility and to create improvements in drug delivery systems.

“A grant of this nature can truly be transformational for a program, and I am grateful to the NIH for their support,” said Clemson University President James P. Clements. “This grant is a testament to the outstanding research that our faculty are doing. What our faculty in EPIC are doing could some day make a difference for people around the world, and I am so proud that this type of work is happening right here at Clemson.”

The COBRE program has three phases, each with different requirements and goals: Phase I focuses on developing research infrastructure and helping junior investigators with formal mentoring and research project funding to help them successfully compete for independent research grants; Phase II strengthens the research center through further infrastructure improvements and continuing support; and Phase III provides support for maintaining the research developed during Phases I and II.

An external advisory council of experienced, highly-respected scientists will provide guidance as the center positions itself to reach Phase II of the program.

“EPIC is a stellar example of Clemson researchers from different disciplines coming together to tackle scientific problems that plague the world,” said Tanju Karanfil, vice president for research at Clemson. “The award highlights the great research taking place here, and the hard work and dedication of many faculty, students, and staff. We are delighted to receive our second COBRE, and are excited about the good things that will come from further research.”

EPIC was founded in 2013.  Prior to securing the COBRE grant, EPIC scientists had already been awarded more than $7 million in external funding, including grants from NIH and the National Science Foundation. EPIC PhD students have been awarded NSF Research Fellowship grants and have continued on to post-doctoral positions at federal labs or at prominent academic institutions such as Northwestern, UCLA, and Indiana University. EPIC Scholars, a graduate and undergraduate student organization, annually cohosts the Cell Biology of Eukaryotic Pathogens Symposium.