COLLEGE STATION — Hurricanes may have taken a big bite out of the U.S. pecan crop this year, but that’s not likely to stop the annual fall flurry of pies, candies, cheeses, and other delicacies made with the popular native nut, officials said.

As much as 35 percent of the Georgia crop totaling 35 million pounds was lost during Hurricane Irma, according to the U.S. Department of Agriculture. Hurricane Harvey took about 3 million pounds out of the Texas harvest. 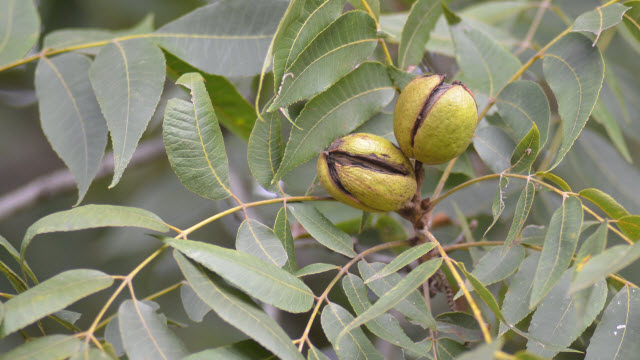 Pecan nuts are protected with shucks or husks while developing. Prior to maturity and harvest, the shucks split and eventually drop off.Photo credit: Texas A&M AgriLife Communications

But the USDA pecan report Oct. 3 indicated that shellers will start to get busy by next week as harvest picks up across the south and growers in storm-damaged areas continue to clear downed trees to access orchards.

“Harvest is underway, and we’re expecting a medium-sized crop in Texas,” said Monte Nesbitt, Texas A&M AgriLife Extension Service horticulturist, College Station. “Early price indicators are strong that demand is high, and supply is not as big as it would have been across the country.”

Nesbitt said the pecan is linked with fall and winter holidays because it is harvested at that time of year. But U.S. growers are planning to change the seasonal consumption phenomena through a new Federal Marketing Order, passed in late 2016, which will encourage year-round uses for the nut.

“Domestic consumption has been flat for decades in the U.S. People eat about the same amount of pecans they always have, and it’s not a lot,” Nesbitt noted. “We eat about a half pound per person per year, so there is a lot of room to increase that.”

Some growers have helped fund state-exclusive check-off programs for promotion and research but with marginal success, he said, and then a national marketing situation emerged.

What changed was China, which discovered the traditional southern U.S. nut several years ago and began importing pecans in large amounts, Nesbitt explained.

“But soon there was a fear in the U.S. pecan industry of what would happen if this lucrative, easy, change-the-game export market goes away,” he said. “What if China plants its own orchards? The U.S. industry realized the need to do more promotion domestically.”

To tackle that need, he said, growers decided to band together for a federal, unified promotion.

As a result of the Federal Marketing Order, U.S. pecan growers and processors created the American Pecan Council, based in Fort Worth, to promote the crop produced in 15 states from Florida to California.

The council’s website, https://americanpecan.com/, focuses on pecans being the only native American tree nut as a point of pride but also notes it’s health aspects. “Wholesome and homegrown” and “The Great American Pecan” are two of the messages portrayed.

Nesbitt said investors are taking note of the new national promotion effort and acreage is expanding.

“We look at this as a key change in the way pecan economics work,” Nesbitt said. “Other tree nuts have had promotional efforts and changed the way they were viewed and consumed in this country.

“The pecan is still a true supply and demand commodity. It is very much affected by supplies and is tuned to demand,” he said. “But what other nut crops showed in their promotions is that as acreage increases so does demand. This is an uptick in terms of how pecans will be marketed and sold and demanded in the future.”

That leads some to think about getting into the pecan business at this stage.

“We (AgriLife horticulturists) interact with people who want to get in on that,” Nesbitt said. “Our annual pecan short course, which has been taught in Texas for almost 60 years, is feeding that need.”

The next short course will be Jan. 22-25 in College Station, he said, and organizers anticipate even more attendees due to the new marketing order.

Most of the orchard expansion nationally has been in Georgia thus far, Nesbitt said.

“We’re not having the same level of planting in Texas yet, and I am not sure whether we will. We have challenges with land prices, water availability and quality, and suitable soils. Georgia gets more rainfall than we do, they’ve got a lot of good soils and water is readily available.”

Nesbitt noted that the USDA figures don’t include native pecan trees, which are estimated at 1 million acres in Texas.

“Those are a quiet, sleeping resource,” Nesbitt said. “If all the native acreage in Texas was put into production and renovated—and that would take a lot of work—we would certainly become the leading pecan-producing state.”

He said until the 1970s and 80s, Texas had more nuts from natives sold than from improved, or planted, pecan tree varieties.

“Prices have not been strong enough on the natives for people to make a lot of investments in them, and there have been questions as to whether this marketing effort will pull the natives along or leave them,” Nesbitt said. “The thinking is that if the promotion efforts are successful, there will be a need for native nuts to fill the gap in demand, at least for some period of time.

“Twenty years ago, people thought pecans took too long to develop and the prices were not great. But that mindset has changed, and we can get pecan trees into production faster with good growing practices and varieties. It now takes five to seven years, and some of the more aggressive, well-managed pecan orchards see good production the fourth year.

“That, coupled with better prices, makes pecans a very viable economic option for farms that are looking to diversify or get into a more permanent cropping system. And some people just like the longevity of pecan trees. For people who are thinking not only about their present situation but children or grandchildren, pecans represent a tangible, transferable agricultural tree-based business.”

But production potential all goes back to the consumer.

“Of all the nuts we consume, the pecan is truly American,” Nesbitt said, “Plus, it has a lot of health benefits.

“We are now recognizing that pecans are a valuable food crop. A pecan is dense in terms of its nutritional value, has great flavor and has proven heart-health benefits and antioxidants. Nuts are popular on high protein diets, so there is a potential place in a lot of the dietary programs that are popular right now.”