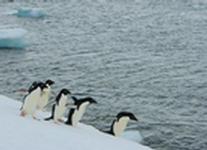 A group of Adélie penguins walking along an iceberg, South Shetland Islands, Antarctic Peninsula.Image Credit: J. Hinke, NOAAKnowing where and how Antarctic penguins, and other seabirds and marine predators, migrate is critical for conservation efforts. Although electronic tracking devices have helped scientists track marine animals' migration patterns, the devices can be expensive, invasive for the animal and challenging to retrieve. Scientists have discovered a new and potentially better way to track where penguins go over the winter using forensics.

"You can say, penguins 'are where they eat,' because a geochemical signature of their wintering area is imprinted into their feathers," said LSU Department of Oceanography & Coastal Sciences Assistant Professor Michael Polito, the lead author of this study that was published in Biology Letters.

Chinstrap and Adélie penguins are part of the family of "brush-tailed" penguins named after their approximately 15-inch long, stiff tail feathers. These birds shed all of their feathers after each breeding season and before they migrate to their oceanic wintering grounds. However, their long tail feathers continue to grow well into the winter when penguins are at sea.

Polito and his collaborators from NOAA Southwest Fisheries Science Center, Oxford University and the Instituto Antártico Argentino attached tags to 52 adult Chinstrap and Adélie penguins at their breeding colonies and retrieved the tags the following breeding season to determine where the birds went over the winter. When they retrieved these tags, the researchers also took a tail feather grown over the winter from each tracked penguin and from 60 other penguins that had not been tagged.

While a postdoctoral researcher at Woods Hole Oceanographic Institution, Polito and his colleagues conducted high-resolution forensic analyses of the chemical composition of the feathers using a technique called compound-specific stable isotope analysis of amino acids.

The scientists were able to identify the unique chemical signatures of penguin's wintering areas in the ocean based on the coordinates from the tags and the data from the feather analyses. From this understanding, they were able to deduce where the other penguins that had not been tagged went over the winter based solely on the analyses of their tail feathers.

"This novel approach could be applied to different tissues from a wide variety of marine animals that migrate over long distances including seabirds, sea turtles, seals and whales," Polito said. "Using stable isotope forensics to increase the size and scope of animal tracking studies will help us to better understand these charismatic species and ultimately aid in their conservation."