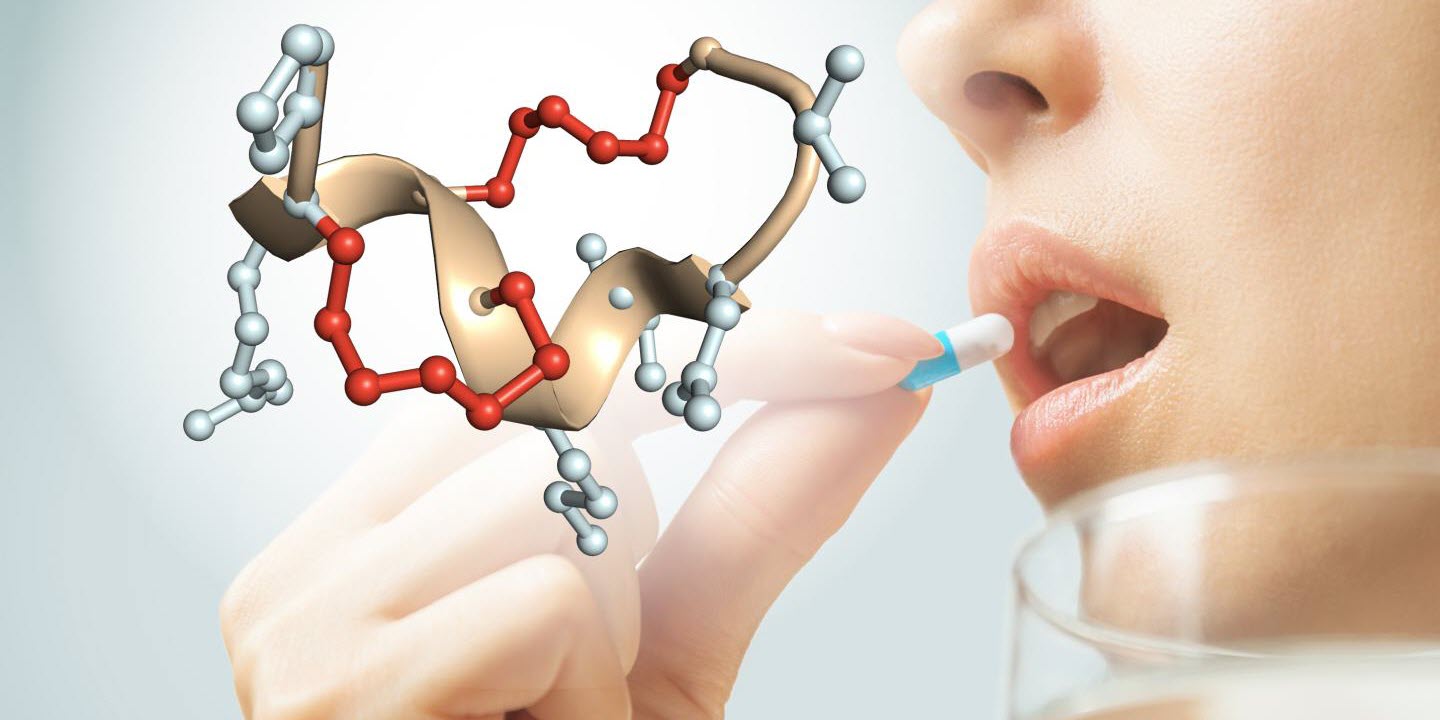 Structure of a double-bridged peptide that is not degraded by enzymes in the stomach and intestines. The two stabilizing chemical bridges are shown in red.
C. Heinis (EPFL)

Peptides are short chains of amino acids that occur in our body, in plants or bacteria to control diverse functions. Several peptides are used as drugs such as insulin, which controls the metabolism of sugar, and cyclosporine, which suppresses organ rejection after transplants. More than 40 peptides are already approved as drugs, generating revenues in the billions. There are several hundreds of peptide-based medications currently in clinical trials.

But almost none of these drug-peptides can be taken orally. Since peptides are an important part of food, the stomach and intestines harbor countless enzymes that can degrade them, meaning that most peptide-based medication do not survive the passage through the gastrointestinal tract.

Hope to generate more stable peptides came from "cyclic" peptides, whose ends are joined together by chemical bridges making them more stable than linear ones because their backbones are less flexible and thus harder to attack by enzymes. In 2018, the research group of Christian Heinis at Ecole Polytechnique Fédérale de Lausanne (EPFL) developed a peptide format termed double-bridged peptides, where peptides are cyclized by two chemical bridges that provide even higher stability. Despite its success, most such peptides were not sufficiently stable to survive the enormous enzymatic pressure found in the gastrointestinal tract.

Now, Heinis's group has developed a new method that identifies among billions of double-bridged peptides those that bind a disease target of interest and survive enzymes of the gastrointestinal tract. The method is published in Nature Biomedical Engineering, and involves three steps.

First, billions of genetically encoded random peptide sequences are cyclized by two chemical bridges that impose conformational constraints onto the peptides' backbones so that they are more difficult to attack by enzymes. Second, this library of peptides is exposed to enzymes from cow intestine to eliminate all those peptides that are not stable. In the third and last step, the scientist dip target proteins into the pool of surviving peptides to fish out those that bind to the wanted disease target. "It's a bit like searching a needle in a haystack, and this method makes this easy," says Heinis.

With this method, the researchers have succeeded for the first time in evolving target-specific peptides that can resist breakdown in the gastrointestinal tract. For example, they gave mice a lead peptide that inhibits thrombin—an important anti-thrombosis target—in the form of a pill. The peptide remained intact in the stomach and intestines, and even though it reached the blood stream in rather small quantities, most of it remained fully intact across the entire gastrointestinal tract. This is a key step towards engineering oral peptide drugs.

Heinis's group is now applying the new method to develop oral peptides that act directly on gastrointestinal targets, meaning that they don't need to travel into the blood stream. "We are focusing on chronic inflammatory diseases of the gastrointestinal tract like Crohn's disease and ulcerative colitis as well as bacterial infections," says Heinis. "We have already succeeded in generating enzyme-resistant peptides against the interleukin-23 receptor, an important target of these diseases, which affect millions of patients worldwide without any oral drug available."