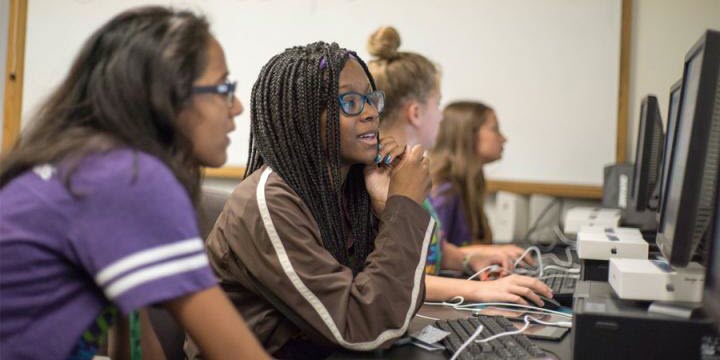 As head of the educational outreach arm of the Florida State University-headquartered National High Magnetic Field Laboratory, Roxanne Hughes has overseen dozens of science camps over the years, including numerous sessions of the successful SciGirls Summer Camp she co-organizes with WFSU.

In a new paper published in the Journal of Research in Science Teaching, Hughes and her colleagues took a much closer look at one of those camps, a coding camp for middle school girls.

They found that nuanced interactions between teachers and campers as well as among the girls themselves impacted how girls viewed themselves as coders.

The MagLab offers both co-ed camps and summer camps for girls about science in general as well as about coding in particular . Hughes, director of the MagLab's Center for Integrating Research and Learning , wanted to study the coding camp because computer science is the only STEM field where the representation of women has actually declined since 1990.

"It's super gendered in how it has been advertised, beginning with the personal computer," Hughes said. "And there are stereotypes behind what is marketed to girls versus what is marketed to boys. We wanted to develop a conceptual framework focusing specifically on coding identity—how the girls see themselves as coders—to add to existing research on STEM identity more broadly."

This specific study focused on the disparate experiences of three girls in the camp. The researchers looked at when and how the girls were recognized for their coding successes during the camp, and how teachers and peers responded when the girls demonstrated coding skills.

"Each girl received different levels of recognition, which affected their coding identity development," Hughes said. "We found that educators play a crucial role in amplifying recognition, which then influences how those interactions reinforce their identities as coders."

Exactly how teachers praised the campers played a role in how that recognition impacted the girls. Being praised in front of other girls, for example, had more impact than a discreet pat on the back. More public praise prompted peer recognition, which further boosted a girl's coding identity.

The type of behavior recognized by teachers also appeared to have different effects. A girl praised for demonstrating a skill might feel more like a coder than one lauded for her persistence, for example. Lack of encouragement was also observed: One girl who sought attention for her coding prowess went unacknowledged, while another who was assisting her peers received lots of recognition, responses that seem to play into gender stereotypes, Hughes said. Even in a camp explicitly designed to bolster girls in the sciences, prevailing stereotypes can undermine best intentions.

"To me, the most interesting piece was the way in which educators still carry the general gender stereotypes, and how that influenced the behavior they rewarded." Hughes said. "They recognized the girl who was being a team player, checking in on how everyone was feeling—all very stereotypically feminine traits that are not necessarily connected to or rewarded in computing fields currently."

Messaging about science is especially important for girls in middle school, Hughes said. At that developmental stage, their interest in STEM disciplines begins to wane as they start to get the picture that those fields clash with their other identities.

The MagLab study focused on three girls—one Black, one white, and one Latina—as a means to develop a framework for future researchers to understand coding identity. Hughes says this is too small a data set to tease out definitive conclusions about roles of race and gender, but the study does raise many questions for future researchers to examine with the help of these findings.

"The questions that come out of the study to me are so fascinating," Hughes said. "Like, how would these girls be treated differently if they were boys? How do the definitions of 'coder' that the girls develop in the camp open or constrain opportunities for them to continue this identity work as they move forward?"

The study has also prompted Hughes to think about how to design more inclusive, culturally responsive camps at the MagLab.

"Even though this is a summer camp, there is still the same carryover of stereotypes and sexism and racism from the outer world into this space," she said. "How can we create a space where girls can behave differently from the social gendered expectations?"

The challenge will be to show each camper that she and her culture are valued in the camp and to draw connections between home and camp that underscore that. "We need to show that each of the girls has value—in that camp space and in science in general," Hughes said.

- This press release was originally published on the FSU News website